The kingdom of Schwert was once peaceful and beautiful, but it is now overrun by monsters. As the Battle Princess Plume, it’s up to you to set things right in this colorful, high-speed action RPG! Recruit a group of warriors and engage in skirmishes against the enemy before taking on huge and powerful bosses in epic siege battles!

Delight in an extensive upgrade system as you stomp the enemy into the ground throughout each level, and collect weapons and materials that you can use to enhance your gear. You’ll be able to unlock new skills based on your weapon and its level, and with enough time and effort, you can even transform your gear into new, more powerful weapons! Fight your way through each area, gaining new characters and abilities, gathering heaps of treasure, and upgrading your weapons and gear, all on your way to victory!

As stated, Battle Princess of Arcadias places us in the shoes of Plume, Battle Princess for the kingdom of Schwert, who is in charge of keeping everyone safe from any potential attacks made against the kingdom or its citizens. Just so you can get an idea of what to expect from the game’s writing, Plume’s brother was turned into a Goose because of a curse, one of the Kingdom’s female knights is madly in love with Plume, another character is a complete pervert, and one of the ladies is a bit of a ditz but incredibly strong. All good? Great!

The first thing I thought of after watching the trailer for Battle Princess of Arcadias was “Odin Sphere” and for those of you that have no idea what I’m talking about, shame on you! But Battle Princess of Arcadias is so much more. The game offers a beat em’ up action in regular combat levels, huge fights between armies in Skirmish mode, and smaller-but-still-huge fights against large bosses in Siege mode, and these enormous titans can completely eradicate your troops if you’re not careful. 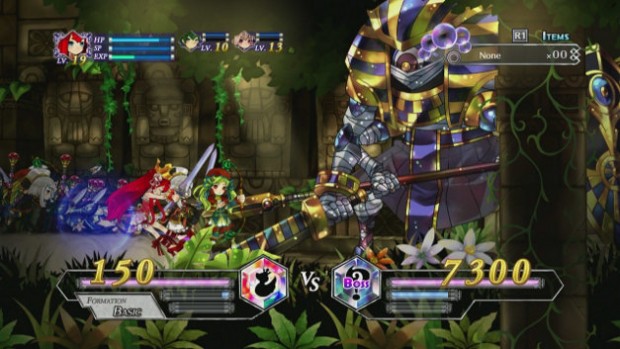 Going back to the game, the story will slowly push you into trying all three types during the first few hours of the game, and more and more elements will be added on top for you to multi-task. Upgrading your current equipment (by adding skills or stats) or purchasing new weapons and protective gear is a must because the game does not hold your hand at any moment. This can be seen right from the second level and on, so don’t be discouraged if you’re completely destroyed during your first quest. 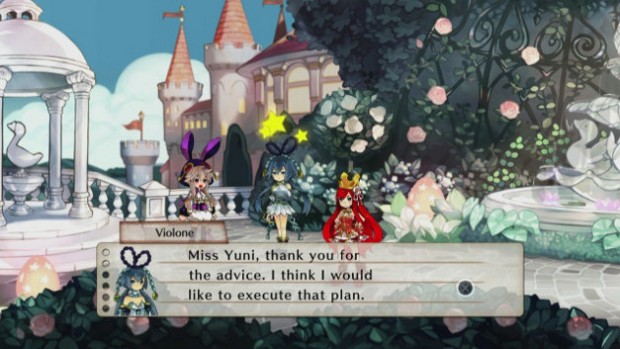 Luckily, the game lets you keep all experience you’ve accumulated from fighting all the detailed enemies and monsters that are out to get you, so at least all of your effort will not be in vain. Speaking of leveling up, this plays a crucial role for Skirmish fights because Plume and each one of her companions will act as the general for a specific type of army (for example, Plume can lead an army of sword fighters), and you can only level up an army (by spending a ton of money) up to the level of its general. 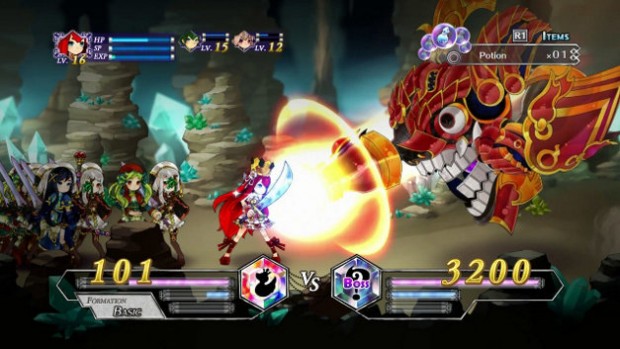 And the game adds an extra element of strategy to the mix by making it so each army type is strong (or very strong) against another type of army, as well as weak and extremely weak against another. This is set in place so that you don’t end up focusing on, say, only using three main characters during every single fight and try to overpower the other troops since you’ll HAVE to level up everyone by sending them out on the field at every chance. 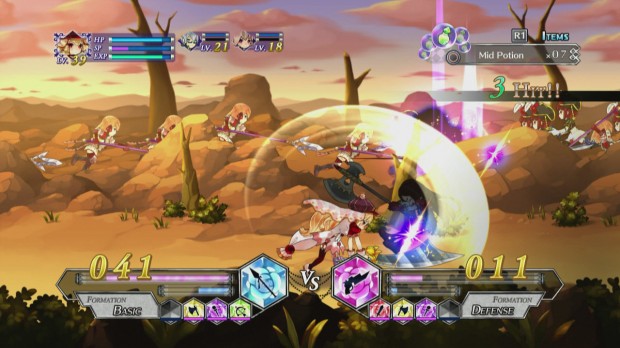 Battle Princess of Arcadias is an interesting release. It mixes elements from beat em’ ups, strategy games and straight up RPGs to give us a very entertaining game that provides dozens of hours of entertainment. Plume and the gang will keep you smiling from start to finish, and the game will make sure to not hold your hand after the first hour has gone by.

This review is based on a copy of Battle Princess of Arcadias provided by NIS America.