Smooth animation of retro 8-bitGraphic is highly evaluated, and player is increasing even now. Moreover, it has attractive game system of (Maximum)four on-line and off-line simultaneous co-op game play.

Phantom Breaker Battlegrounds is a new Vita release that is a port of a Xbox Live Arcade release from last year. It is a mix of an old-school beat-em-up with some RPG and fighting game mechanics. It’s an interesting mix, and for the most part it succeeds in creating a great experience.

Normally I would start by discussing the story, but I honestly don’t quite understood what is going on. If I had to sum things up for you… Hero fights bad guys, gets sucked into another universe, fights more bad guys, goes to a demon world, then escapes and gets to hang out with friends again. Like other eastern titles, sometimes the story itself doesn’t translate well to North America. That being said this is not a big draw for the game itself. 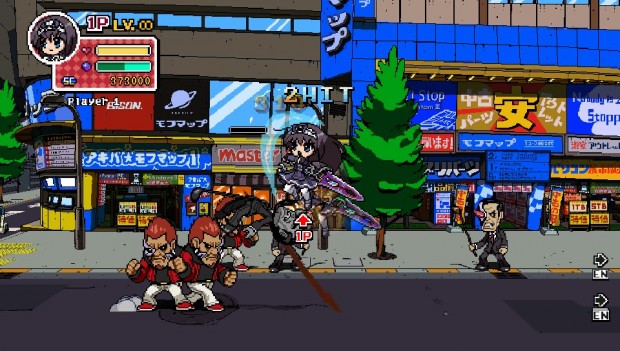 As I said earlier, this game is an old school beat em up. Think Double Dragon, Ninja Turtles, or Battletoads. You have waves of enemies that you need to dispatch with your skills to then continue on to the next part until you reach the boss. Repeat eight times to make it to the end of the game. What’s cool here is that your characters get experience points and when you finish the stage you level up and can spend points on improving your characters strength, defense, or speed, or on more skills with a pretty in-depth Skill tree. You start the game with four characters, but as you play you unlock more. Because of the skill tree you will unlock more moves and combo options as well that give this release a great fighting game feel. There’s also a bunch of mechanics that feel like they would be at home in a Blazblue game.

It’s a good mix and it controls great, but I found that it was almost a little too easy. Button mashing in most ways will get you through the game as long as you’re careful, and the only sections I had difficulty with were the ones with characters with projectiles, and only when a bunch of them were on the screen as they would spam the screen with projectiles that were incredibly difficult to avoid. Once you complete the game you can play on harder modes or with different characters, and the difficulty spike fixes the problem about the game being too easy. One cool part is that you can take the same character through it all again and said character will still keep all levels and upgrades, which allows you to continue improving all of them. 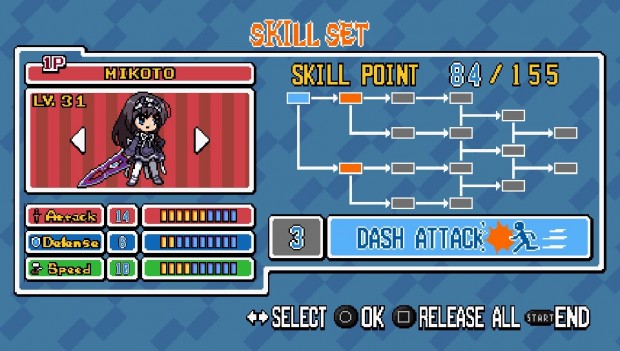 The game has a unique visual style, kind of looking 16-bit while not being quite right. All of the playable character designs are great, and each one has a different overall feel. As you play the game you will notice the difference especially once you start upgrading their skills. All of the enemies are very unique and have different design cues. Sure, you will notice similar character models but there will be subtle differences, and while there were a few palate swaps, I was impressed with the enemy variety since it definitely made the game more enjoyable.

I also thought the world itself looked great. It had many unique environments and every stage felt different and brought something new and off the wall to the table. The sound was great as well, and the music sounds great on the Vita (same goes for the battle sounds). Make sure you play with the volume up or use headphones so you don’t miss out.

The game does have cooperative play, but I wasn’t able to find a quick match and start a game with someone. From watching videos it does look cool, so if you and a friend have the game, there is a lot of fun to be had.

There are 21 trophies to collect in the game, and, unfortunately, they’re all bronze trophies with no platinum. You get one for each stage you beat and for other things you do in the game including maxing out your character’s Skill tree, or for finding hidden playable characters. Even starting the game nets you a trophy (possibly one of my easiest ever). It probably wouldn’t be hard to get 100%, but it would just take a bit of time. 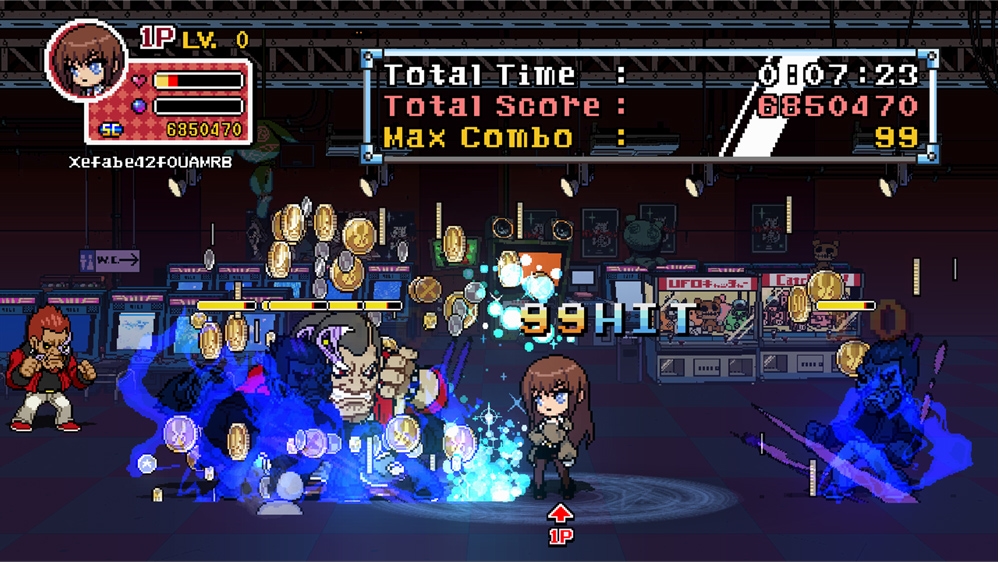 I also got the Makise Kurisu DLC, which adds one more playable character to the mix. She is from a playable novel called Steins;Gate from the same publisher. I did not have a lot of familiarity to the character, but she quickly became one of my favorites overall. She has a unique style all to her own, and I enjoyed playing as her. The DLC also expands the level cap in the game from 70 to 99 so that you can upgrade your characters further. And something that will make trophy hunters very happy is that the DLC adds another eight trophies into the mix (7 bronze and 1 silver).

Phantom Breaker Battlegrounds is a very interesting game. It takes a lot of old school formulas mixing them up with current sensibilities. I think it mostly succeeds, but it loses some points for it’s low difficulty. That being said, if you take your time and learn the systems in place and spend time leveling up all the characters there are many hours of enjoyment here for you, and the extra difficulty modes and DLC will keep you busy as well.

You can purchase Phantom Breaker Battle Grounds from the PSN store

This review is based on a PS Vita copy of Phantom Breaker Battle Grounds provided by 5pb.