Costume Quest 2 is an RPG that relates the story of Wren and Reynold (the same main characters as in the original Costume Quest) who are on a quest through time to save Halloween. An evil dentist (!) managed to get control of an item that allows time travel and by going back to the past, he managed to ban Halloween. In the altered future that followed, costumes and candies are forbidden, which is why our heroes will make sure that Halloween is restored!

Trick, treat and pick a fight with villainous dental soldiers in Costume Quest 2, the sweet sequel to Double Fineâ€™s hit original, Costume Quest, that turned fans of all ages into candy obsessed crusaders. This inspired RPG adventure includes a range of new features and gameplay improvements to double the amount of mischievous fun. Explore spooky time-traversing landscapes, don adorable new costumes that transform into powerful Hallo-warriors, and collect even Creepier Treat Cards to wield in combat against a legion of hygiene obsessed baddies. Only heroic siblings Wren and Reynold can save Halloween forever!

Costume Quest 2 is a crazy RPG in many different ways, from its beginning to its conclusion! For starters, as mentioned earlier, the evildoer is a dentist (how bad can a dentist be?) who has gone back in time to steal Halloween, and our heroes will need to fulfill quests and fight foes in order to reclaim the holiday! To help them, they will have to discover a ton of costumes that can be equipped, and each one of them has a special power that is either helpful in battle or at cities. 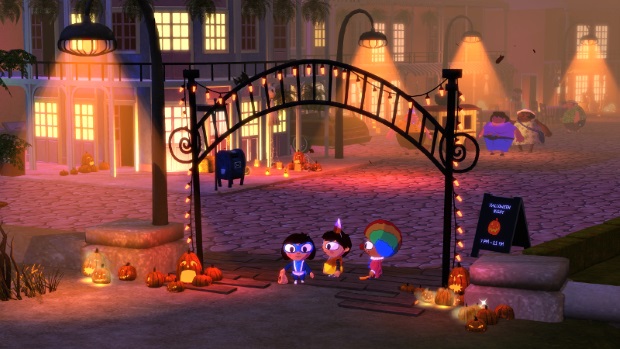 A good portion of the time spent in the game is wandering in the different eras and cities (with their past and future counterparts). The goal in those segments is to search for new costume pieces and complete delivery and fetch quests, like Trick-or-treating the residences of the neighborhood. The cities aren’t safe though, because some enemies are wandering directly in the roads, and some monsters are also hiding in the houses and will attack when you Trick-or-treat the residence. The quests are what youâ€™d expect from an RPG, but I once missed a main quest because I didnâ€™t realize I had to talk to a character using a specific costume. I got a lot farther in the game before realizing that I was only doing side-quests and that the main quest was actually locked because I hadn’t triggered it earlier. It would have been clearer if the game had prevented me from progressing if the the main quest was not activated.

As for the battle system, Costume Quest 2 battles are turn-based and are quite fun and particularly crazy! As they begins, everyone grows into enormous proportions (150+ foot tall), and each character will have an attack and skills set related to the costume he has equipped (costumes can be changed at anytime outside of the combat screen). 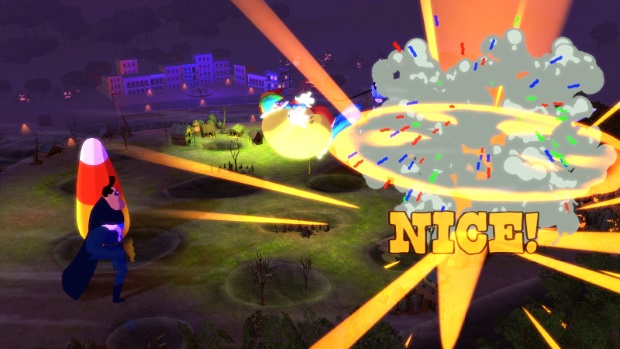 As for the gameplay, the battles were surprisingly reminiscent of Super Mario RPG, in the sense that each attack and defense can be powered up when a button is pressed at the right time (timed hits). The enemies aren’t usually too hard to beat, and even the few boss battles are quite easy. But in the last third of the game the difficulty ramps up and battles become longer and harder as each enemy attack can drain more than half of a party member’s HP bar, while you only do normal damage to them.

Finally, once a battle is won, experience and candies are awarded. Experience is as usually used to level your individual characters, but in this case experience is for the party and not for each member, and each level makes a huge difference on the field! Candies act as currency and can be used to purchase upgrades to your costumes and Treat cards, which are items that give some perks in battle. 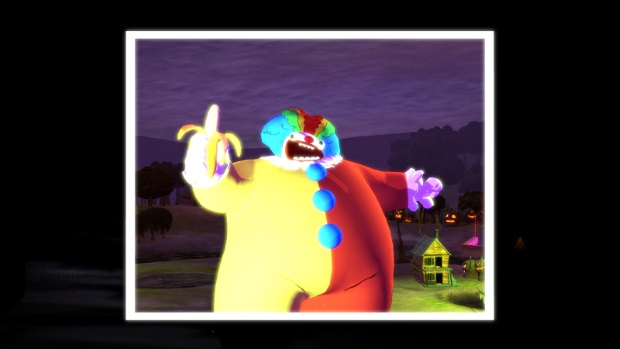 Final Thoughts
I liked how Costume Quest 2 is different from traditional turn-based RPGs by its design and setting. I liked the battle system and fighting monsters in the first half of the game, but thought that combat became somewhat unfair in the last sections. There are a lot of quests to do, but most of them are relatively generic and involve a lot of back-and-forth to complete.


This review is based on a digital copy provided by DoubleFine and Midnight City.

Halloween Contest 2014 – Vote for the winner!