“Review in 2 minutes” is a new feature in which we present to you shorter bite-sized reviews of games we played, and loved.

3D Dot Game Heroes is one of those relatively hidden PS3 gems that every action/adventure game fan should try. It was made in 2010 by From Software, the makers of the Dark Souls series. Originally, the following trailer single-handedly sold me to the game!

3D DGH takes place in the world of Dotnia, a 16-bit world that got upgraded into the 3rd dimension, and your goal will be to save the princess and defeat the evil Dark Lord. The plot of this game is very basic, but the gameplay makes up for it!

The gameplay in 3D DGH is very reminiscent of the 16-bit Zelda games (and the recent Adventure Time release) in its presentation, with its map exploration and dungeons. For example, right at the beginning of the game, around 70% of the world can be explored! Of course, by clearing dungeons and caves, you’ll acquire items that will help you reach the rest of the game. 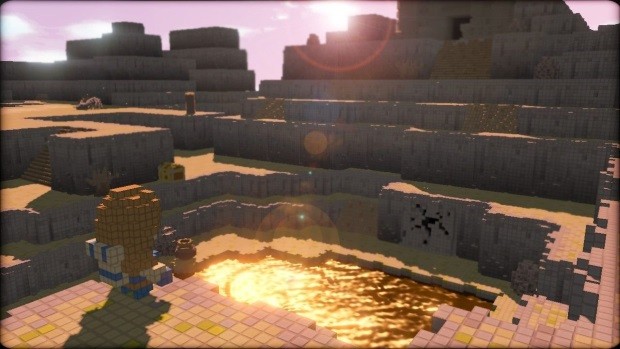 Also, if you checked the trailer above (if you haven’t, I still encourage you to do so!), you should have noticed that this game has a “different” way to handle your arsenal. Upgrading your swords is a BLAST and easily one of the mechanics that you should play with.

However, this game is not exempt from some flaws, and while the level and dungeon design is generally good, the fire temple (Temple #5) in particular is poorly designed and will prove to be a real challenge to your patience. At least one of my friends abandoned the game in this dungeon, and it was totally justified.

Overall 3DDGH is very fun and entertaining to play, and getting stronger swords is hilarious. If you want a great adventure game, give it a try, you won’t regret it! Also, this game can be found nowadays for almost nothing on the used market, which makes it a perfect purchase for your collection.

Interested in 3D Dot Game Heroes? If so, why not support us and buy it from our Amazon Store?