Shops are boarded up, creators are overworked and starving, and death looms over all Gamindustri. However, humanity has found a way to persevere!

In years past, the deserted lands of Gamindustri were known as the ‘realm of chaos.’ Since the advent of ASICâ€”the Arfoire Syndicate of International Crimeâ€”morality has all but vanished. As much as 80 percent of all students are rumored to worship the being known as Arfoire.

Parents, despite knowing it to be a poor object to worship, went ahead and taught their children to do so. The government turned a blind eye instead of crushing this crisis in its infancy.

Thus, Gamindustri fell into complete and utter disarray. The citizens have come to accept all of the corruption as normal. They take no issue with acquiring items illegally.

Those who were victims of this mentality lost all their strength and were sent to wander the Gamindustri Graveyard forever.

This is a double review for Hyperdimension Neptunia Re;Birth2 by Ceidz and EdEN. This review presents what they both had to say.

Hyperdimension Neptunia Re;Birth2 is a turn-based Japanese-RPG that follows the story of Nepgear, Neptune’s little sister. After the events of the previous game, the main CPUs are stuck in Gamindustri’s Graveyard and therefore you’ll be tasked with saving Neptune and her friends from their fate. Also, the world’s “shares” (that is, the reputation of each Gamindustri nation) have shifted in favor of the evil ASIC (the Arfoire Syndicate of International Crime), so you’ll need to recover the shares of each nation and make sure ASIC falls. Gaining shares comes mainly from sub-quests that can be done in parallel with the main story. 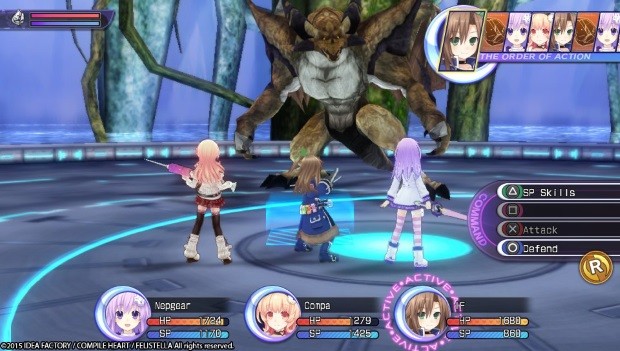 The battle system is very similar to the one found in Re;Birth1. If you’re a newcomer to the Hyperdimension Neptunia series, take note that the game features a very fun, fast-paced and turn-based battle system. Once it’s a character’s turn (the turn-based mechanic is reminiscent of FF X), you can hit the Triangle (hit rush), Square (power hits) and X (break guard hits) buttons to deliver different attacks. Each monster has a blue line that represents its shield right under his HP bar. As you can imagine, it’s more effective to break the shield of an enemy before attacking him with Power Hits and Hit Rushes.

It might sound pretty straightforward, but it’s actually really cool in action, and requires some thought to end the battles quickly! Also, each of the actions that can be done in battle (using the Triangle, Square and X buttons) can be customized from the game menu, and it becomes relatively mandatory to upgrade your attacks a few hours in because you’ll otherwise notice that the monsters have became really difficult. This game requires a little grinding here and there so that you don’t fall too far behind so that you’re ready for the next boss(es). 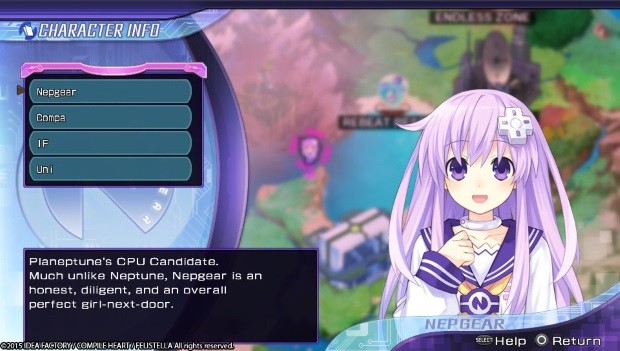 Finally, I also enjoyed a lot the soundtrack of Hyperdimension Neptunia Re;Birth 2. I particularly loved the battle theme, and a few themes come back from the previous game.

And now it’s my turn! After everything that Ceidz has said about the game, I’ll now focus on some of the things he hasn’t mentioned yet. But let me get started by saying that I really liked Hyperdimension Neptunia Re;Birth1 and that I’d been looking forward to this sequel for a while now, so you can imagine what to expect from me!

Something I had a lot of fun with Hyperdimension Neptunia Re;Birth2: Sisters Generation was the Stella dungeon mini-game. The way this works is as follows. While on the menu for any of the game’s main cities, you can send Stella to explore any of the areas you’ve already visited, and while there she will search for treasure and fight the monsters she runs into as she tries to come back in one piece. Each “floor” takes a few minutes to clear (that is, she fights as you play the game), and the deeper she goes into a dungeon, the harder the enemies will get… but the treasure she might find will also be better! You can equip Stella with the weapons, armor and accessories she finds during her quest, and these increase her stats so that she can hold her own against the onslaught of monsters out to get her. If she fails, she will lose all the equipment she had, as well as any treasure she might have found. It is recommended that you send her to explore a dungeon’s bottom floor as a test to see if she can handle things, and you can then send her to explore the next floor (for which she’ll start on the first floor before going higher), and then the next one and so on until she’s good enough to be sent on a quest to clear the whole area. Stela’s mini-game is definitely fun, and it gives you something else to do while you are out trying to complete quests or even while having a conversation with the NPCs in Gamindustri. 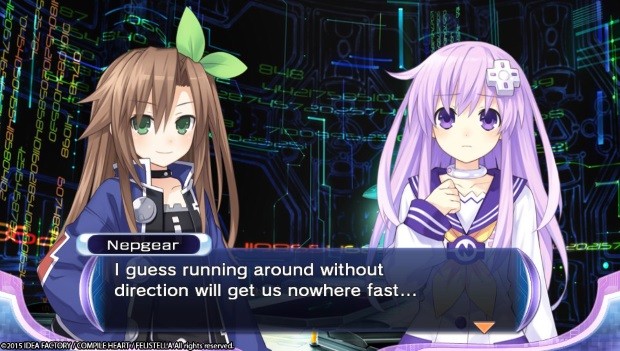 Now, let’s move on to how you can manipulate the game itself thanks to a handy feature… plans! Plans are obtained from completing quests, from NPCs, or from “other sources,” and they’re used to make changes to the whole game or to specific areas. In order to use a plan, you must first obtain said plan so that you can then use the items needed to unlock it. Sounds simple, right? Well, there’s one extra requirement for plans… memory! Each plan uses some of the available processing memory, and if you can’t allocate enough memory, you can’t activate a plan. As for the plans themselves, they’re VERY useful and since they can be used to, say, change the items you can obtain from a particular area, or make all enemies in the game weaker, which can help you get past a particularly tricky area when you technically shouldn’t because you might not be strong enough. On the flip-side, there’s also a plan to make enemies stronger which might seem like overkill (because Hyperdimension Neptunia Re;Birth2 is definitely not an easy game!), but it can help when you want to level up your team since stronger enemies also means you can receive more experience for every victory. 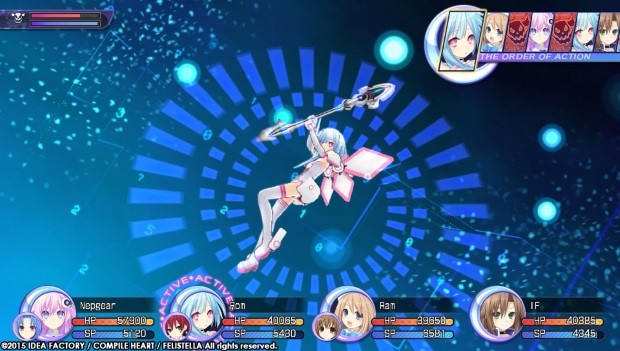 Something else you can use to your advantage is the game discs you can create. First you need a blank disc (or a cassette, or a game card). Once you have one, you will notice it has some slots (better discs have more than one slot) where you can add idea chips depending on the maximum level for said slot. These idea chips can be found all over the place if you do things right and once placed on a game disc they can, for example, lower the damage you receive from plant enemies, or allow you to be faster, or make your attacks poison your enemies, to name a few. There’s plenty of options for you to mix and match, and switching discs to tackle specific areas or bosses can prove to be very handy.

Soundtrack is good, and some themes are really catchy” cons=”Might be a bit too hard for some” score=86]

Hyperdimension Neptunia Re;Birth2 is available right now in North America (digitally and physically). Physical copies will be available in Europe on February 6th, and digital copies can be secured starting on February 11th. And you can also take this one for a spin on your PlayStation TV device!

Interested in Hyperdimension Neptunia Re;Birth2: Sisters Generation? If so, why not support us and buy it from our Amazon Store?

Minutes Out on Vita on February 10!