Brandish: The Dark Revenant is a remake of Brandish, a game that was released on the SNES back in 1995. This remake was made by XSEED and Nihon Falcom and features full 3D graphics, and a few new floors to discover. Surprisingly, this title was released to the PSP so it might be one of the last releases we’ll ever see on that console and has full compatibility with the PS Vita.

Vittoria: A medieval kingdom banished deep underground a thousand years ago, brought down by the hubris of its ruler upon the slaying of a god. Lost and forgotten, a new kingdom was built upon the empty hills that mark its grave — but its ruins are still populated by the vengeful, twisted spirits of its once-proud people, and whosoever falls into these depths is most certainly doomed to suffer a torturous demise at their hands.

Bounty hunter Ares, however, is not quite so willing to accept this fate. In this reimagining of a golden era classic, Ares must work his way up to freedom through over 40 floors of unimaginable danger while his archrival, Dela — a powerful sorceress who fell into the ruins with him — is hot on his tail.

Solve brain-busting puzzles, battle unique enemies and forge ever onward in this contemporary dungeon-crawling action RPG from the makers of Ys and The Legend of Heroes!

This is a double review for Brandish: The Dark Revenant by Ceidz and EdEN. This review presents what they both had to say.

Brandish: The Dark Revenant is a PSP remake of Brandish, which was originally released for the NEC PC-9801 and FM Towns, to later be ported to theSNES. It is a very hard dungeon crawler where death awaits you around every corner. If you’re not careful, you might fall into a pit, activate a trap that will shoot arrows at you, or enter a room full of monsters with almost no hit points left.

It is highly recommended that before you dive into this adventure you take the time to complete the game’s tutorial since it will show you the basics for trying to stay alive and in one piece. Skipping the tutorial would be a huge mistake because Brandish: The Dark Revenant does not hold your hand, and you’ll quickly be in danger a couple of minutes into the game. 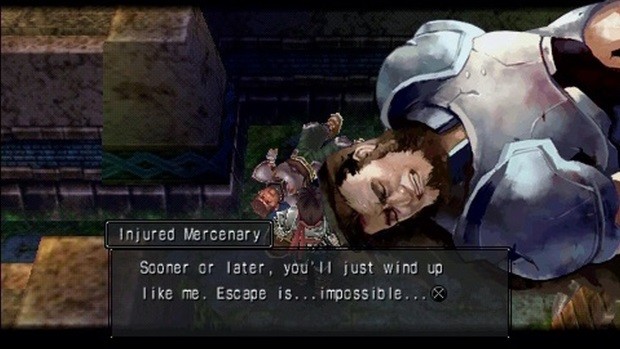 Once you’ve completed the tutorial, you’ll get right into the game’s story proper. Our adventure starts begins as Ares is fleeing from sorceress Dela Delon, who is hunting him down (for no apparent reason). At one point, the sorceress attacks our hero with a mighty spell that causes the ground below them to collapse, sending them into a creepy labyrinth deep down in the ground.

Everything that moves is your enemy, and if you’re not careful you’ll be dead in a flash. Learning how and when to attack and defend is a must, and you must always remember what items are available to you either in the hot keys (activated by moving the analog nub[stick] in a specific direction and then pressing the O button) or in your backpack. Another useful hint is that you must always save before entering a room because you never know what will be waiting for you! 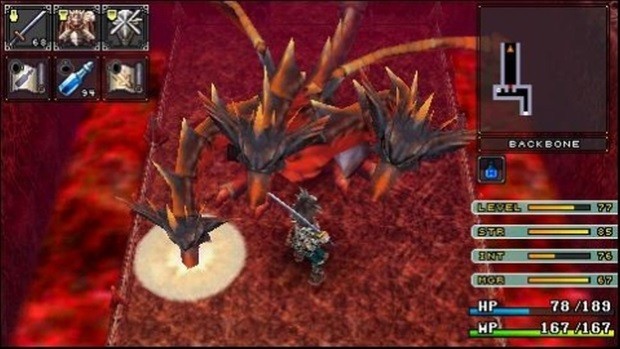 A nice bonus for Brandish: The Dark Revenant is that after you finish the game you will unlock “Dela Mode” that is basically the Expert difficulty version of the game. Enemies are stronger and deadlier, traps are less forgiven and you will need to relearn how combat works because Dela is a magic user and not a warrior, meaning that enemies must be defeated in a new way.

Overall I really liked Brandish: The Dark Revenant, and I’ll definitely keep playing until I can escape from the deadly labyrinth… only to do it all over again thanks to the second quest in Dela Mode (Oh, I almost forgot to mention that Dela Mode also includes 10 floors not available during the main quest, so you’ll definitely enjoy your second adventure just as much as the first one).

As EdEN said, Brandish: The Dark Revenant is a dungeon-crawler RPG in which your first objective is to survive. The control scheme of this game takes a little bit to get used to as it isn’t what you’d usually expect. Both your character and the enemies move on an invisible grid. Your character strafes instead of moving in the direction you press the D-pad, and you have to press the shoulder buttons to change the direction you are looking to. Items, treasure boxes and doors can be interacted with as long as you are facing them, and of course a lot of doors are locked at first and require either generic or specific keys in order to open them and progress through the levels.

Brandish is a truly hardcore game. I got stuck about 10 minutes into the game and didn’t know what to do. And this is in the FIRST floor. But then I realized I could use the sledgehammer to break damaged walls, which allowed me to explore the rest of the first floor, and it was then that the game started to make more sense. The dungeons are filled with a ton of monsters, and most of them are quite hard to tackle as is, but beating them gives you experience points that go toward leveling up in true RPG fashion. The more enemies you defeat, the stronger you’ll get, so be sure to defeat (or at least try to defeat) every single enemy you run into! 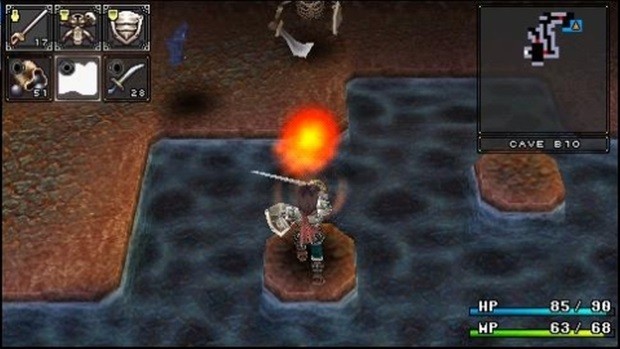 One point that I liked a lot while I played is the ability to heal and save everywhere. You can heal all your wounds by resting (pressing select) at any time and this replenishes your HP, so that you’re ready to continue your way through the floors. Like I also mentioned, the game can be saved everywhere so this quickly became somewhat mandatory to do before opening new doors just in case what that what was lurking around the corner was too hard to handle the first time around.

Brandish: The Dark Revenant is a hardcore game that does not hold your hand… at all. If you’re up for the challenge, you’ll find a polished upgrade to a beloved classic of the top-down dungeon crawling variety. The vicious enemies and hidden traps will keep you on high alert as you explore every corner of the dungeon, searching for a way to leave alive. If you like difficult games like Dark Souls, then Brandish: The Dark Revenant will not disappoint.


This review is based on digital copies provided by XSEED Games.

Adventure Time Developer Little Orbit Wants Your Help To Design a Character for an Upcoming Game!