Sword Art Online -Hollow Fragment- is an RPG from Namco Bandai Games, that follows the first season of the Sword Art Online anime. I purchased it the day it released last year, and played it a lot! Earlier this year, the Official Playstation Blog announced that this game had ranked #1 in the 2014 PS Vita PSN sales, so I decided it was time to review it to let you know what it is all about.

The story of Hollow Fragment takes place right after the events of the first arc of the first season of SAO (without spoiling anything, this is at the 75th floor of the Aincrad). The game was supposed to end there, but due to a glitch, players have been warped to the 76th floor instead of being freed from SAO.

With its VRMMO-like genre and world, Sword Art Online: Hollow fragment is an RPG that offers players solid gameplay where combo attacks, execution speed and knowledge of the opponent will be mandatory to survive.

The first two hours of the game are a recap of what happened in the anime and why those people are stuck there. Even if you havenâ€™t watched the anime, you will still get information about the events that led to the current situation. 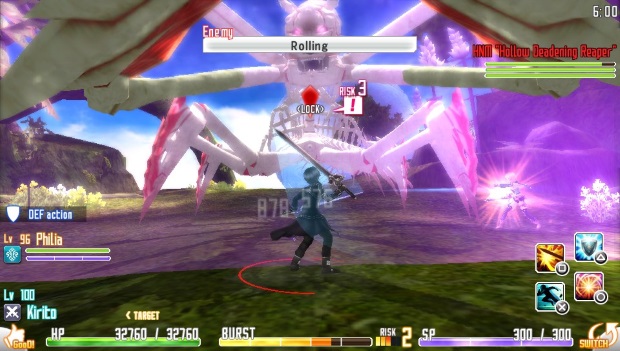 About the gameplay structure, I loved it for the first few floors, but it did become a bit monotonous after clearing a few of them. This is mainly because each floor has the same set structure:

Don’t get me wrong, exploring the game in itself is great, because a lot of care and variety has gone into the dungeons and the floors themselves. The labyrinths, however, all look the same and are quite long to get through, so I was usually completing them in a hurry in order to reach the crazy floor boss fight.

The battle system is the core of SAO HF and take note before going any further that it’s one of the most technical battle system I’ve ever encountered in an RPG. It took me around 5 hours of gameplay time to be able to get the hang of it!. You have a TON of skills to learn and assign to either one of your action bars. Mastering them takes time but it’s eventually very rewarding. 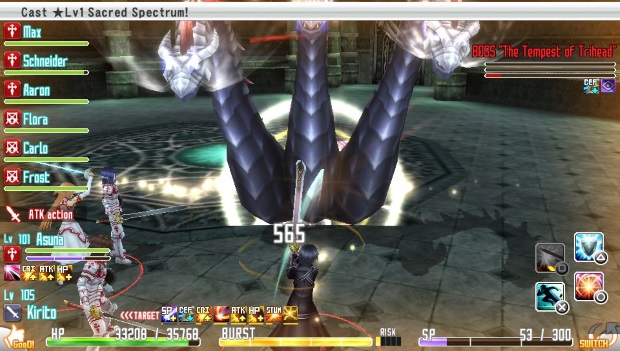 Sword Art Online: Hollow Fragment is not without flaws. To begin with, the text contains a lot of typos and general errors that occurred during the translation. Also, the in-game help is scarce and can’t be read again once the starting tutorial is over. And since the battle system is very technical, missing something in the tutorial cripples the first few hours of gameplay. Finally, there are some camera and frame rate issues when there are more than a few monsters in the area.

Final Thoughts
Sword Art Online: Hollow Fragment is a great RPG. It follows the story of the first arc of the Sword Art Online game and features a great (and complex) battle system. I liked playing it, but since each floor follows the same structure, progression eventually became redundant and monotonous. It was very nice of Namco Bandai to release the free DLC pack that got released in Japan which adds costumes, treasure boxes and, of course, a few new missions. I encourage you to try this game, but I don’t think most of you will reach its end!

You can purchase Sword Art Online -Hollow Fragment- on the PSN.