DeathSpank is a trilogy that was released between 2010 and 2011, a series of games made by industry legend Ron Gilbert (who you might recall for, say, the Monkey Island games) and HotHead Games. I purchased DeathSpank (the first game) in a heartbeat after trying the demo several years ago

Since this is a series that deserves a second look, I thought it might be good to do a review for each of the games in the trilogy, in order to make you see why it deserves your time! We’ll start with Orphans of Justice, but reviews for DeathSpank 2 (Thongs of Virtue) and DeathSpank 3 (The Baconing) will also go live in the following weeks!

DeathSpank: The Orphans of Justice is the first game of the trilogy. You start by taking control of DeathSpank, a character who devoted to being “Hero to the Downtrodden, a Vanquisher of Evil, and a Dispenser of Justice.” His goal in this game will be to recover an artifact (hilariously known as “The Artifact“) in order to fulfill his destiny. Of course, things get really complicated and what happens while searching for said mystical object is up to you to discover as you play the game! 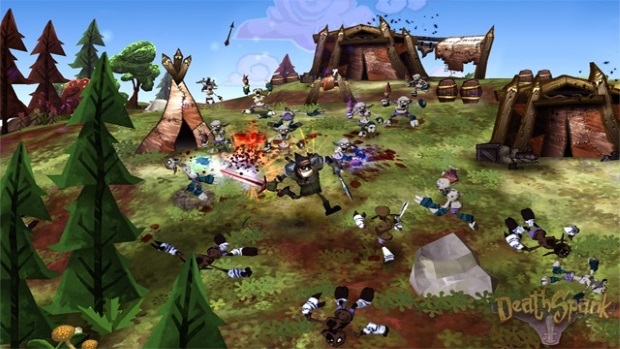 The gameplay for each release in the Deathspank series is based on a quest-and-loot model. The main story itself is consistent enough to justify the price of this first episode, but there are also a ton of sidequests that can be done to get new gear and experience. Those generally involve crazy people with hilarious dialogs, and they’ll almost always ask you to find gross items in a childish way – which is definitely part of the game’s charm. As you kill enemies, you’ll get experience points to level up. Your inventory will also fill very quickly as there are many items that can be looted from the enemies.

This game is also perfect for couch co-op with someone with less gaming skills because you can have a second character to help Deathspank. I recently gave a controller to one of my daughters, and while she was enjoying herself hacking through enemies, I was using magic from the secondary character to heal her.

Final Thoughts
I loved the first episode of the Deathspank franchise. This game has a perfect mix of hilarious dialogues and action (beating up a ton of enemies), and loot management. As you progress, you’ll encounter an NPC called Eubrick. This guy has to be one of the most entertaining characters in a video game, ever, and he alone almost justifies playing this game!

Did I mention that the dialog in this game is hilarious? Here is a quote (you can hear it in full in the trailer above!):

I once slayed a dragon.
Well… I didnâ€™t really slay it, and it wasnâ€™t technically a dragon.
What I meant to say is… I once kicked a cat.
– Eubrick

I loved Deathspank: Orphans of Justice so much that I recommended it to several of my friends, and everyone loved it! We still even joke around about some of the events and dialogs for DeathSpank.

[review pros=”Hilarious dialogue (I’m looking at you, Eubrick!), and very funny story
Perfect balance for couch-coop with someone with less gaming skills
Hero to the Downtrodden, a Vanquisher of Evil, and a Dispenser of Justice” cons=”You probably haven’t play this game yet” score=90]


This review is based on a digital copy purchased impulsively by the reviewer right after he was done with the demo.