It’s time to check out some of the characters for Lost Dimension from Atlus. Today you’ll get to meet Sojiro, Zenji, and Himeno. Click past the break to see a trailer for these characters, as well as to learn about a special offer from Atlus for those who get the game during the early launch.

Introducing another round of psychics that will join your fight in Lost Dimension: Sojiro, Zenji, and Himeno! Sojiro’s knowledge of medicine allows him to heal and revive fallen teammates, as well as inflict deadly status effects upon his foes. As a mimic, Zenji’s special powers allow him to copy the abilities of nearby teammates; he has the potential to double the trouble when you put him in your team, or if worse comes to worst, he’s carrying a shotgun too. Last but not least is the hot-headed Himeno, who can control fire and ice to obliterate anyone standing in your way.

As you can see below, if you get Lost Dimension during the first two launch weeks you’ll have access to around $20 of DLC, absolutely free! 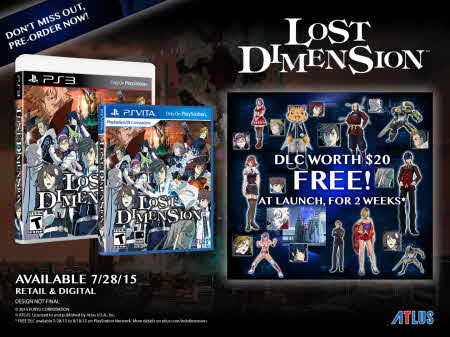 What do you think of the new video and of this offer? Let us know in the comments below!