Atelier Shallie: Alchemists of the Dusk SeaFeaturedGame Reviews
One Comment

This 3rd episode in the Dusk series tells the story of 2 young girls who take to the Dusk Seas in search of their dreams. For one, it is to save her land. For the other, to achieve her dream.

Atelier Shallie: The Alchemists of Dusk offers players the chance to select one of two main characters, and each one features a different story and quest to enjoy (definitely great for the game’s replay value, especially considering it’s a long RPG!). Both characters are nicknamed Shallie (weird, right?), but they each have a different name: Shallistera and Shallotte. 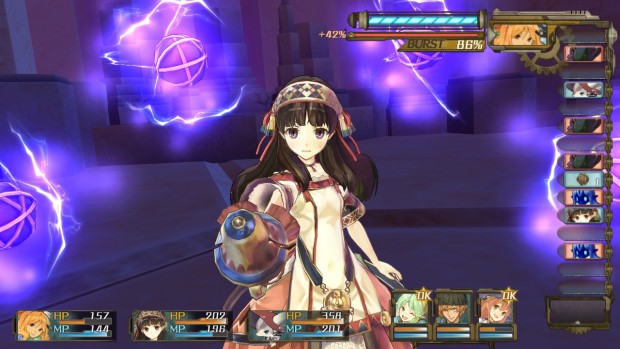 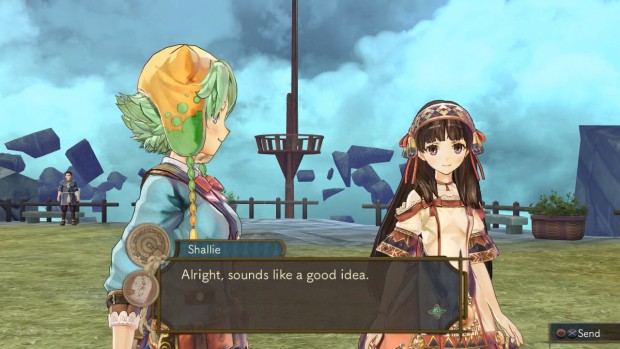 Synthesis is a big part of the Atelier series, which is why it plays a crucial role in this latest adventure. For those of you who have no idea what I’m talking about, let me elaborate. Synthesis is a process by which several ingredients are mixed to complete recipes (which can be obtained as you work your way through the story or from books bought at stores). The resulting item from a synthesis process can either be a new ingredient needed for another recipe, a healing item or even a piece of equipment, to name a few. To make it easier for players to know what they can and can’t make at a specific time, recipes for which a higher Alchemy level is needed or for which more ingredients are required will be shown with a line going through them. Recipes require either a specific ingredient, or an ingredient from a general group of items (for example, a recipe might require refuel pads as one of its ingredients, leaving the other two ingredients open for the player to select them from all the ingredients that fall into that group, as is the case for the magic herbs and water they have in stock. The quality and properties of each ingredient will also be factored into the synthesis process, so do take that into consideration. The better the water you use, the better the final product will be!

Every time you complete a Synthesis process, you’ll be rewarded with Alchemy experience points that will allow you to work towards increasing your Alchemy level. As mentioned before, some recipes will not be available unless players have reached the corresponding level, so be sure to always work on your Synthesis skills! 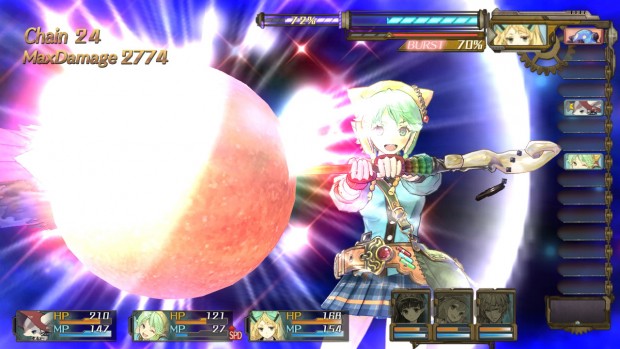 When you are ready to explore an area to search for supplies (and to continue with the game’s story), you’ll need to prepare by selecting the Search Equipment you’ll take with you. Since space is limited, you’ll have to try to fit as many items as possible to make your trip easier. You can rotate items to make use every single square in your Search Equipment area, which does help a lot. Another thing to consider is that items can only be used a set number of times, so plan accordingly!

Once you’re out on the field, you’ll find gathering points that are special areas where you can obtain ingredients for your recipes. You will also find breakable objects that might contain valuable items. Field visits will be your main source for alchemy ingredients, so always be sure to gather everything you can! 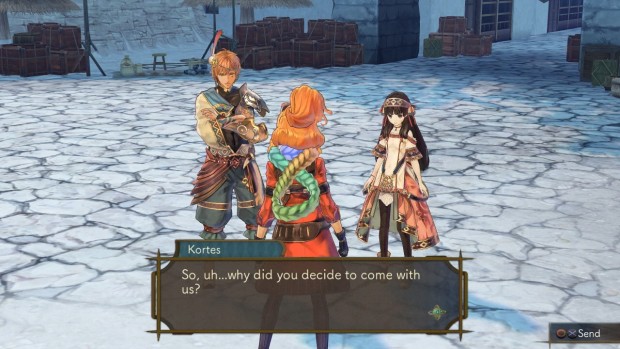 You should watch out for are the battles you’ll engage in while on the field. A battle will commence when you run into an enemy or when you take a swing at them with your weapon (which will give you the advantage). Once you’re in a battle, you’ll take turns fighting all enemies and defending against their attacks. The order for each turn will de determined by the speed of each character/enemy, as well as on the action that was taken before during a previous turn. If you’re good (and lucky) enough, you’ll be able to break an enemy, which will make it skip its turn while also opening a window for you to deal massive damage. You should also keep an eye on the bar in the upper right corner of the screen, which is your Burst bar. If you can fill it, you’ll trigger a Burst that will increase the damage you deal to enemies. Attacking will increase your Burst bar, but it will also decrease when enemies hit you.

Very early in the game you’ll also be introduced to alchemy skills and field events. Alchemy skills allow you yo improve the properties if ingredients used for alchemy. Thanks to skills you can boost the usefulness of an ingredient that will in turn allow you to obtain better items through alchemy. Field events occur when you completely fill the event bar while exploring. You do this by defeating enemies and by gathering materials. Once the bar is full, you’ll be able to activate special events that might, for example, allow you to battle a fierce enemy or obtain a rare relic. 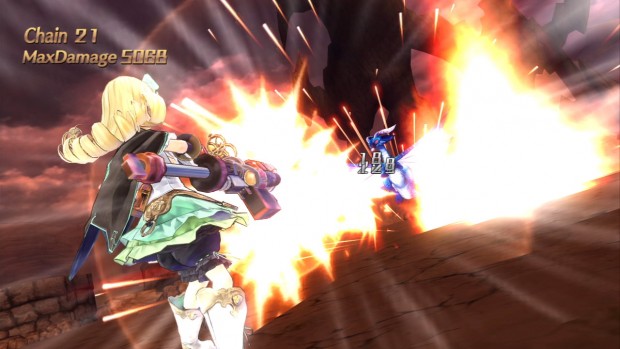 Something else to consider are the requests obtained from the Union. These are extra quests you can complete during your normal run (most of the time), and the money obtained from a successful quest can make a huge difference for your adventure, especially early in the game. Since you’ll be defeating enemies to level up anyway, you might as well get a little extra for your effort, right? 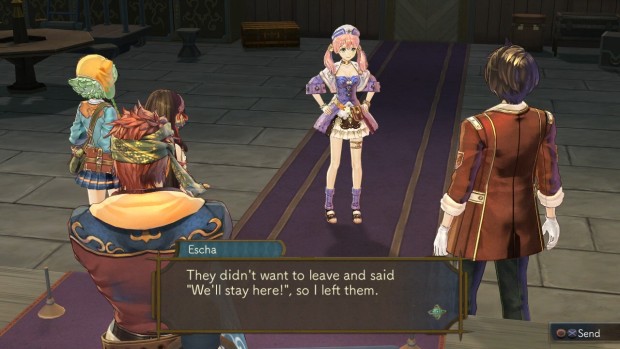 There is one major change in Atelier Shallie not present in the previous games in the series, and it completely makes this feel like a different experience. You see, in other games of the Atelier series, every time you traveled to a new location on the field, and every time you gathered ingredients, time would pass in-game, and you had a set amount of time to complete tasks and main quests in each particular entry. But for Atelier Shallie, there is no time limit! A purist might see this as a bad thing, but as someone who’s played all the PS3 Atelier games, I can assure you it makes for a more dynamic game. This will allow players to focus on enjoying the game and not on having to micromanage every action to make sure you don’t go past a specific day of the month when an event was set to take place in town… but since you were busy on the field, that means no event for you! This is a huge change, and one that made me enjoy this Atelier release even more.

The game looks great, showing the polish achieved from all the work done on the previous PS3 Atelier games. The areas also feel larger (even though they’re actually a bit more self-contained), and they’re very colorful and more packed than what we have seen in previous games. 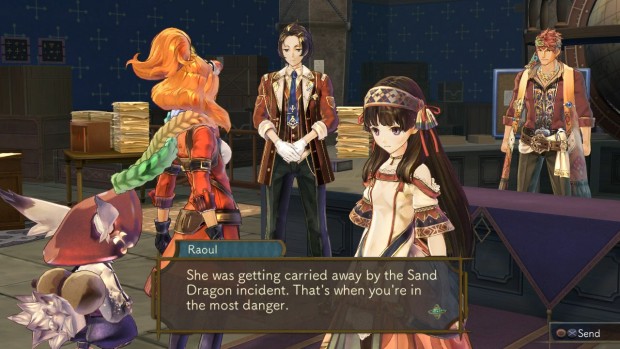 Atelier Shallie: Alchemist of the Dusk Sea is an outstanding RPG release that helps to end the Dusk trilogy of the Atelier series on a high note. Removing the time limit is a game changer that made a great RPG even better, and the many quests and side-quests you’ll take on during your journey, as well as featuring two separate storylines, will keep you busy for dozens of hours. 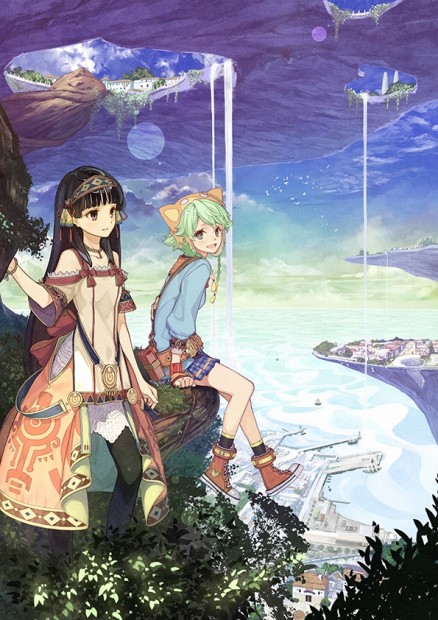