Just in case this is the first time you’ve heard of either Hyperdimension Neptunia or “Gamindustri”, take note that “Gamindustri” is a parody of our own video game industry (Planeptune is for SEGA, Lowee is for Nintendo, Lastation is for PlayStation and Leanbox is for Xbox). The Hyperdimension Neptunia series doesn’t take itself too seriously, and conversations often lead to very funny cut-scenes (that’s the strength of the franchise)!

So what did we think of this third Hyperdimension Neptunia Vita release? Read below to find out!

Itâ€™s time to Nep-Nep like itâ€™s 1989. Neptuneâ€™s been sucked into an alternate dimension of Gamindustri! In order for her to escape from this late â€˜80s world, Neptune will have to collect enough shares to open up the path to her own dimension. Sounds easy enough â€“except a nefarious alliance called the Seven Sages wants to rid Gamindustri of all CPUs, including Neptune!

Forging cross-dimensional friendships, will Neptune be able to defeat the Seven Sages, save this alternate dimension and get back to her own, or will she be stuck in the â€˜80s forever?

This is a double review for Hyperdimension Neptunia Re;Birth3 by Ceidz and EdEN. This review presents what they both had to say.

Hyperdimension Neptunia Re;Birth3 is a turn-based Action-RPG in which you follow the inhabitants of Gamindustri. Since the world is at peace, there isn’t anything special to do at first which is why in the beginning the quests presented to us are relatively trivial. Of course, in true Hyperdimension fashion, the game gets harder very fast, and this is where the real fun begins! 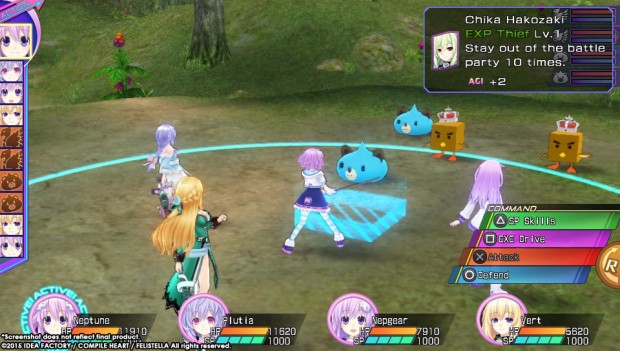 As for the gameplay section, the battle system is pretty much identical to the ones found in Re;Birth1 and Re;Birth2. If you haven’t played the previous games, the battle system is turn-based (similar to the one for Final Fantasy X), fast-paced and fun. As for the attacks available, you can hit the Triangle (hit rush), Square (power hits) and X (break guard hits) buttons to deliver different attacks. All enemies have a shield, so it’s often more effective to break their shields before delivering Power hits to deplete their HP. As was the case with earlier games, this is very fun in action, but selecting which enemies to fight is still hard since we have to select precisely where the attacks will land if we want to damage more than one enemy at the time. Also, the in-game menus have been completely redone and feel way easier to navigate and more fluid, which is a very welcome bonus! 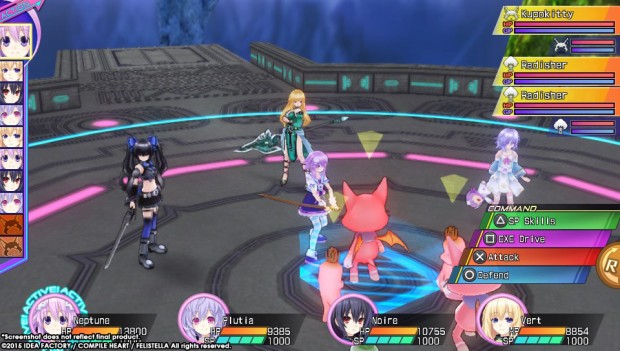 Finally, as an anime fan, I was very pleased to see that the Japanese voices are available as free DLC for this game. Downloading the language pack comes at a huge 825 MB, so you might be craving for a bigger Vita memory card if you’re interested in having it!

And now it’s time to dive back in the Hyperdimension Neptunia Universe! Having Hyperdimension Neptunia Re;Birth3: V Generation on the PlayStation Vita is great since it allowed me to either play for 10-20 minutes at a time and put the portable in sleep mode or to play for an hour or more at once with great ease. As Ceidz said, the reworked menus make this a more streamlined game, so you’ll be spending more time playing than trying to find the one sub-menu you need to build plans or to check on quests and challenges! 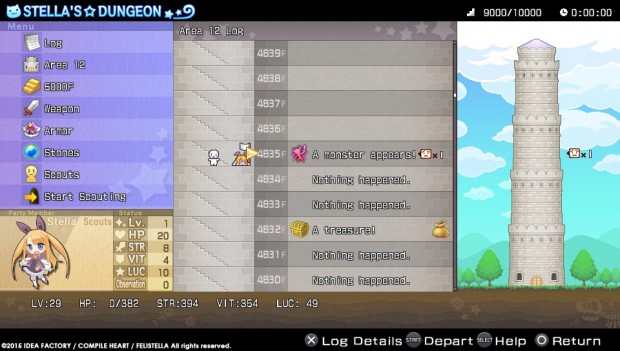 Plans are obtained all over the place, either found in dungeons or obtained from NPCs, and they allow players to activate special options to, for example, increase or decrease the strength of enemies, or you might want to create a plan that adds an item or weapon to the shop to make things easier thanks to the added support of a stronger weapon. Each plan requires a set number of ingredients before it can be completed, which is why you should always harvest ingredients while making your way through the game’s dungeons. You also get ingredients from defeating enemies, and since you need to fight to level up, you might as well kill two birds with one stone!.

The game is easy to understand since all you have to do is go to the guild to take on quests to be rewarded for your efforts. Some quests are unique, some can be repeated more than once, and some are marked with brackets – [This would be a special quest]. The ones that are unique usually have great rewards, and the ones that can be repeated several times are ones you should always accept since most of the time they require that you defeat X number of enemies of a particular type, and since you’re going into dungeons anyway to complete other quest, you might as well be rewarded more than once. The quests in brackets are the most important quests since they’re the ones that move the story forward, so unless you’re ready to continue with the main story, you should ALWAYS do every other available quest at least once! 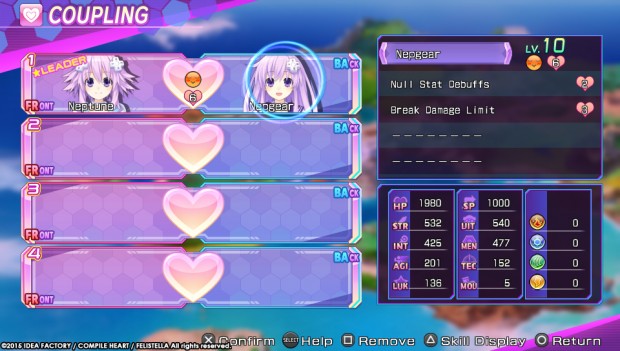 And on top of all the quests, players can also aim at completing an extra set of challenges (found in the new and improved menu) that ask players to walk a set distance, jump X number of times, defeat X number of enemies, and so on. These are cumulative and are separate for each of the characters in your party. The good thing about challenges is that completing each one will provide a permanent boost to said character’s stats, which is definitely an excellent reward!

I can’t really go too much into the story aside from what has already been mentioned: Neptune is sent to what seems to be an alternate dimension version of Gamindustri set in 1989, and this opens the door for a lot of jokes and conversations that reference the situation of the gaming industry from “back in the day.” Those who have been following the other games in the Hyperdimension Neptunia series will be happy to see all of their favorite characters making a return for the last game in the trilogy. 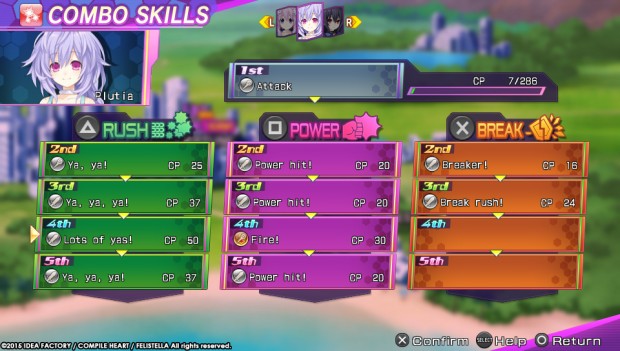 Hyperdimension Neptunia Re;Birth3: V Generation is a great end to the RPG trilogy. It’s definitely more polished than the first two entries (as is to be expected), and the gameplay mechanic, graphics, and story are top-notch. You’ll need to dive into the game for dozens of hours if you’re aiming at getting the platinum trophy, but it’s well worth the effort. I look forward to seeing what the next proper RPG entry in the Hyperdimension Neptunia series will be, perhaps on PlayStation 4!

This game is now out digitally and physically for North America and Europe on the PlayStationÂ®Vita and is compatible with PlayStationÂ®TV.

The Swindle Will Be Released On PlayStation 3 and Vita This July!