Dengeki Bunko: Fighting Climax Is Getting A Special Launch Edition 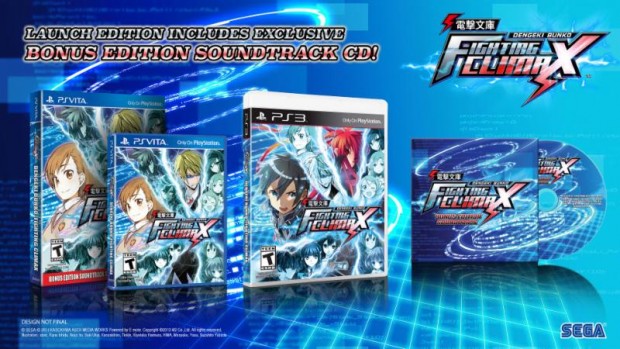 SEGA got in touch with us to let us know they’re working on Dengeki Bunko: Fighting Climax, their fighting game based on the popular Dengeki Bunko light novels (Sword Art Online, Durarara!, etc.) that will be out on October 6 North America, South America, and Europe!

For North and South America, SEGA is preparing a special launch edition that will include a soundtrack CD with songs from outstanding SEGA composers such as Teruhiko Nakagawa, Naofumi Hataya, Kenichi Tokoi and Jun Senoue, to name a few. If you want to secure a copy you better pre-order because this will be a very limited print run!

Dengeki Bunko: Fighting Climax is a 2D crossover fighting game featuring popular characters from Japanese novels published under the Dengeki Bunko label, and will be available this October in retail stores and digitally on PlayStationÂ®Network. The game will be $39.99 for the PS3 version and $29.99 for the PS Vita version.

The Dengeki Bunko collection boasts a vast array of beloved characters who lend themselves flawlessly to this highly balanced, easy-to-learn, high-action 2D fighting game. In Dengeki Bunko: Fighting Climax players attack, guard, and take damage in order to build their Climax Meter, allowing them to execute moves which recreate highlight scenes from the original novels, even adding specially arranged animations for characters who do not fight in the original works. The game includes characters from numerous Dengeki Bunko works alongside several fan-favorite SEGA characters brought together in SEGA-themed environments.