Crime is a dangerous game – high risk and high reward. Are you ready gamble with your life in The Swindle?

The Swindle is a steampunk cybercrime caper about breaking into buildings, hacking their systems, stealing all their cash, and quickly running away again before the police show up.

London, 1849. Scotland Yard will soon activate its breakthrough surveillance technology, ‘The Devil’s Basilisk’. Its surveillance capabilities will be total and your career as a master thief will be over.

Steal it, before that can happen.

From the safety of your rickety airship, you can modify your thief with new skills, tools, and all manner of technological horrors to tackle the richest and most secure buildings in London.

All the buildings youâ€™ll be robbing are randomly-generated, so youâ€™ll never get the same level twice.

Have you got what it takes to pull off The Swindle?

Welcome to The Swindle, a new game published by Curve Digital, who have already brought us several great games that will soon be classics. The best way to describe The Swindle would be as a 2-D roguelike action RPG. It plays very much like a roguelike with RPG elements to give you some more control over your destiny.

The gist of the game is you have 100 days to steal “The Devil’s Basilisk” – the ultimate surveillance device – from Scotland Yard before being a criminal will be impossible. You spend the next 100 days getting your character ready to steal the device, by stealing from smaller places and upgrading your skills with money so that by the time you need to sneak into Scotland Yard you will have the appropriate skill set to pull one hell of a heist. 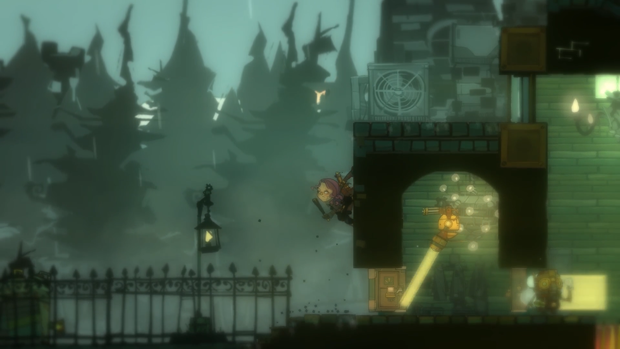 As I said before, the game plays very much like a roguelike, similar to Spelunky or Rouge Legacy in that all the levels are procedurally generated, meaning you will not see the same level twice… and that you will die with one hit. Since you are working from the sky and sending thieves in to steal for you, every time, you die a new thief is sent in. What separates it a bit from the genre is the character progression you have going on. You can use your money to buy upgrades including better hacking skills, EMP’s, bombs, teleporting and more to help you avoid or beat the enemies on the level.

Here is my one problem with the upgrade system: it is designed to give you a choice in how you build your character allowing different runs of the games and different experiences for different players. However there was such a monetary difference between costs of some of the upgrades, that you have no choice but to upgrade some other areas first before the ones you really want because that is all you could afford, and you need said skills to be more successful and earn more money. 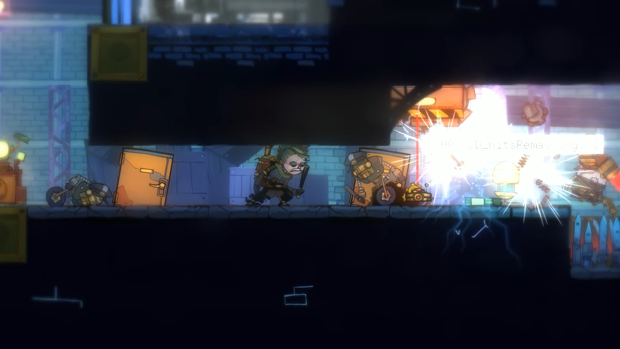 Another issue I had was just getting started in the game. It really doesn’t hold your hand telling you what to do at all. In fact, I was outright confused about what my objectives were and how to go about the game. I understood you needed money to make it further in the game, but I couldn’t quite get the hang of it. Eventually as you play and experiment you figure it out, however, a tutorial level explaining the basics would help to create a better experience and set you on the right path.

The game controls really well which is the most important part of a game like this. You need everything to feel right and click properly to avoid certain death. If you do die, you need to realize it’s your fault and not the game’s fault. The other thing I like about this is the risk vs. reward feel to the game. When you die you lose all of the money you have collected, so you need to be careful and get to the end by making the right choices. 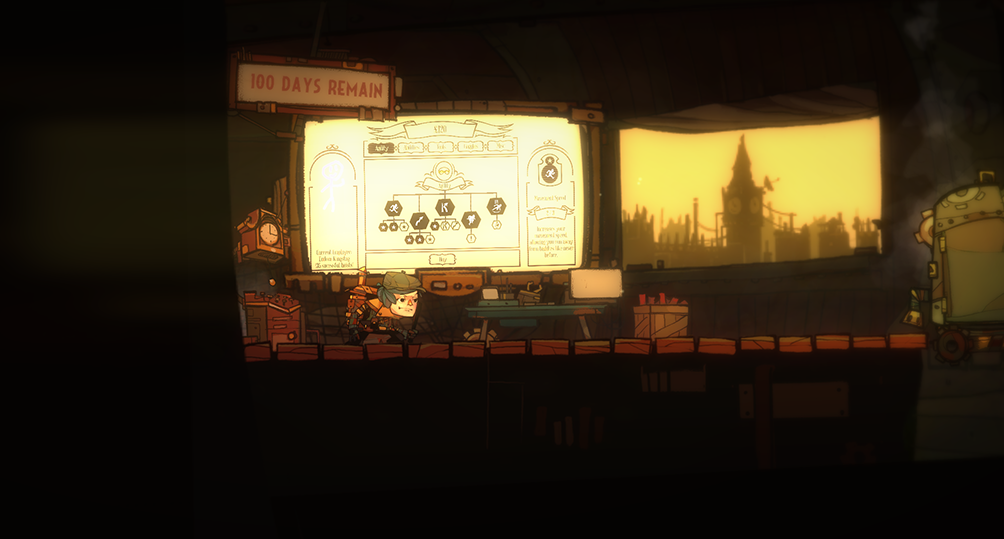 The Swindle looks gorgeous. It uses a hand-drawn art style giving you a steampunk Victorian feel to the game. It takes place in a future Steampunk Scotland and the game delivers its premise. The animation is top-notch, and it needs to be due to the one-hit death nature of the game which means it needs to run precise and accurate. The music is wonderful often adding suspense to the game just at the right moments and feeds into creating that wonderful steampunk feel.

The game has fifteen trophies. Most all bronze except for a lone Gold and one Silver trophy. It would have been great to see more trophies or a different distribution since some of the bronze trophies are difficult and should actually be ranked a bit higher. As always, it’s sad that a Platinum trophy has been omitted when I think it could have easily been included in a game of this caliber.

The Swindle is a good game. It’s steep learning curve does get in the way right after starting the game, and the RPG progression system sometimes doesn’t make you feel like you have a true choice when selecting upgrades It does show it’s upsides in its tight gameplay mechanics and how fun it is once you get going.

You can purchase The Swindle from the PSN store


This review is based on a PS3 copy of The Swindle provided by Curve Digital Publishing.

Volume Is Out Today on PlayStation 4 – Coming Soon To Vita 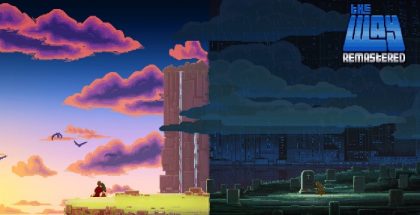