Escape Plan Bravo is the fourth episode in Tales from the Borderlands, an interactive story set in the Borderlands universe. Following the events of Catch a Ride, the team is taken captive by Vallory. They’re now tasked with finding the last Vault piece.

This episode continues the story of Rhys and Fiona along with the friends (and enemies) they have made during their journey. As has been the case with other reviews for Telltale Games’ episodic releases, this review contains some spoilers about the story. Are you ready?

Captured by Vallory and her goons, Rhys and Fiona are forced to continue the search for the Vault beacon – at gunpoint. The beacon is on the Hyperion moon base – Helios – while our heroes are on Pandora… so there’s the pesky cold void of death known as ‘space’ to overcome. Even with assistance from a familiar face, and with a worryingly helpful Handsome Jack hitching a ride in Rhysâ€™ head, getting on board the ominous â€˜Hâ€™ is going to take every drop of guile, and quite possibly all the spunk youâ€™ve got. Sacrifices will be made â€“ can you make the tough choices needed to succeed? 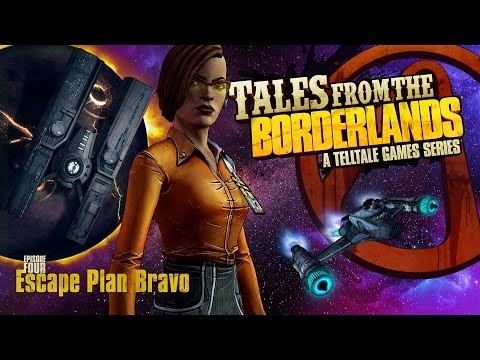 Tales from the Borderlands – Episode 4 Trailer This fourth episode starts with Rhys and the team devising a great plan to recover the last piece for Gorthys. As we can all guess from now, the plan will not go exactly as planned, and will lead to some truly hilarious situations! Why? Because this is Tales from the Borderlands, that’s why!

During Escape Plan Bravo, Rhys will have to recover a body, while Fiona and Tessa will go to see an old friend to ask him to build a rocket that will propel them up to Hyperion. Things don’t go as smoothly as they thought they would, but in the end they’ll get what they need.

Once up at the Hyperion, Fiona is tasked with something that wasn’t originally planned, and this event definitively became my highlight for the episode! Soon after, Rhys has to defend himself from a horde of Hyperion employees, which lead to another very funny moment for the episode. I definitely love the great care that has gone into creating the scenarios and the funny dialog for all characters in the series. I think this episode was the best yet, and I can’t wait to play the next one to see how this series will end! There are still performance issues with the PS3 hardware, but since the game is built on the same engine as the other episodes, that was to be expected. I definitely hope that once the series is over Telltale Games considers doing a second season since they’ve done an amazing job so far.


This review is based on a digital copy of Tales from the Borderlands: Escape Plan Bravo provided by Telltale Games.