Ultra Despair Girls is the third game in the Danganronpa series that started in 2010 on the PSP with Trigger Happy Havoc. Said PSP version was later ported in 2013 to the PlayStation Vita, and the same happened with the sequel titled Goodbye Despair which released first on PSP 2012 to then get a port to PS Vita in 2014. Ultra Despair Girls is a follow up to the events of Goodbye Despair but does not require players to experience the previous game.

Ultra Despair Girls is my first experience with the Danganronpa universe, and I enjoyed this game and its gameplay so much that (as of the time of writing those lines), I think this is a serious contender for a Game of the Year award on the Playstation Vita!

Read below to see why I liked this game so much!

Komaru Naegi is a normal girl, the kind you can find anywhere. She was taken from her family and imprisoned in an apartment during The Tragedy. Komaru had almost completely abandoned hope and had accepted her imprisoned life until one morning when she was forced to learn an even deeper despair. It all happened when someone suddenly broke down her front door, but it wasn’t a hero or a savior…

Komaru narrowly escapes and finds the outside world is not the one she knew from over a year and a half ago. It had become a world of despair, where children controlling Monokumas ruthlessly hunt down adults. Her only hope of survival is the Hacking Gun, given to her by a mysterious stranger, and another girl by the name of Toko Fukawa.

The game begins in a quite confusing way: Komaru Naegi (the main protagonist) tells us that she’s been living the last year alone in an apartment from which she can’t escape. After telling us how much she wants to be saved, her door is finally breached and she realizes that she’s in deep trouble because her “savior” is, in fact, a Monokuma that wants to kill her. She escapes her apartment and almost immediately meets up with Toko Fukawa, a strange girl who will become her partner but who’s having a split personality disorder between her “normal” shy personality, and the very extravagant and dangerous Genocide Jack.

In this twisted world, the violence is mainly driven by five kids, the self-proclaimed “Warriors of Hope”. In a nutshell, they’re hunting adults (which they call demons) because of the violence they were victims of as kids. As you can guess by now on, the subject of this game is pretty mature! Even though this game depicts violence, the violence itself is censored: for instance, there is a ton of dead bodies scattered around the city, but only their shadows are seen. Same goes for the blood! 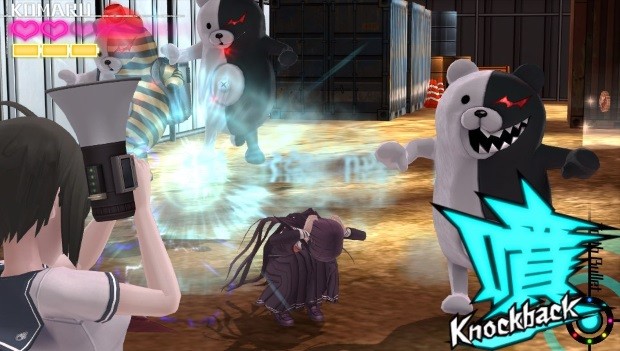 As you progress through this third-person shooter / visual novel game, you’ll realize how much the totality of the city is in ruins, and how many Monomukas have taken over the city. There is a ton of them to destroy, and hopefully you can trust your special Hacking Gun to take them down. The hacking gun uses Truth Bullets that interfere with the mechanical circuits of the Monokumas and are awarded progressively throughout the campaign. One of the things I liked about the hacking gun is how each bullet type is special on its own and offers new strategies to take down your enemies.

For instance, the most basic bullet is called “Break” and only hurts the enemies (hit the red eye for a critical!). Another bullet type makes the enemy dance (pictured below) but if you hit a sentinel with this bullet, all nearby enemies will come at him so that you can destroy them all at once! Another bullet type electrifies an enemy and the shock spreads to all other enemies in water. If you’re overwhelmed by too many enemies at once, you also have the possibility of pressing the Triangle button to switch to Genocide Jack who is designed for melee attacks, and he’s definitely a life saver when you’re about to lose control! 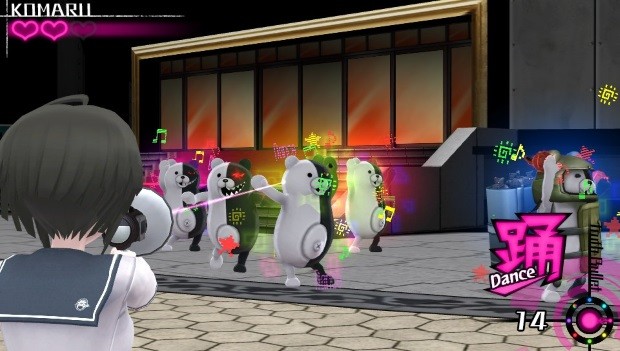 Regarding the actual ammo and the health, one thing I loved for the immersion is its persistence. For example, if you barely win a fight through a wave of Monokumas with only one heart container, and only a few bullets in your hacking gun… well you’ll have to live with that for a while until you can find some more by beating enemies or finding machines. Using a save point does not replenish health or bullets, so a certain sense of survival arises with those rules. You’ll also earn money after beating some Monokumas, and that is used to upgrade your bullets through qualities or through Genocide Jack’s attacks. The character growth is handled through Skills that are scattered in the maps, so if you don’t want to explore and go straight to the next objective, you might have permanently missed a Skill! Take note that at the normal setting, the difficulty is very manageable, and maybe even a little on the easy side at first.

Another one of the gameplay elements that I loved is the small arcade machines called Monoku-man which are small puzzles where you have to devise how to destroy a set amount of enemies, often done so by using a single explosion or by triggering a chain of events (pictured below). These segments are fun to figure out, and they sometimes serve as a tutorial by requiring us to use a type of bullet we just acquired. If you fail the mission requirement, you can restart the segment to achieve it as intended. 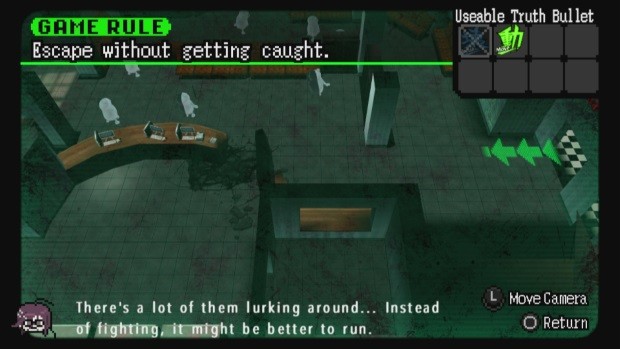 Finally, I wanted to note that the camera has a few issues on the two modes it offers. I resorted to “Manual” mode that allowed me to control it with the right analog stick, but its speed is too slow (and can’t be changed in the options), so more than once I got stuck in a corner trying to see something while being attacked by enemies. Also, while fighting a boss, the camera automatically switches back to “Auto” mode that was an annoyance since I greatly preferred the “Manual” camera scheme. It isn’t a big issue, but I did want to bring it up. The save point locations are also strangely scattered through the story, and while some of them are 10 minutes apart, in some instances there are others separated by as much as 45 minutes of gameplay, which reduces a bit of the “on-the-go” factor of this game. Luckily you can put your Vita in sleep mode to continue later, but this definitely isn’t the same as being able to save and backup your progress.

Final Thoughts
Danganronpa Another Episode: Ultra Despair Girls is an amazing game that boasts a very impressive story mixed with near-perfect gameplay elements. I loved playing it and liked the different mini-games that change the gameplay on a regular basis! The voice acting is also top-notch, and there are a lot of cut-scenes to enjoy throughout the adventure. Finally, I wanted to note that at the normal difficulty setting, the Monokumas are very manageable and I rarely felt overwhelmed. I definitively recommend Ultra Despair Girls to Vita gamers looking for great action/adventure games featuring an awesome story!

Danganronpa Another Episode: Ultra Despair Girls will be available on September 1st! Why not support us and get it delivered to your door by buying it from our Amazon Store?


This review is based on a digital copy provided by NIS America.