Are you ready to save all of the scientists, find out what happened to the world and fix it? What is your ultimate weapon? SCIENCE!

NOVA-111 is a sci-fi themed turn-based adventure game with a real-time action twist. Explore alien worlds and combat fiendish alien creatures in your quest to restore the flow of time, all in the name of SCIENCE!

Pilot your trusty vessel through mysterious and foreign planets in this original sci-fi adventure. Your mission: fix space-time and search out the scientists lost in the aftermath of the Universe’s greatest experiment. Aided only by your trusty (if somewhat sandwich-obsessed) guide, you must repair the temporal vortex!

Navigate mind-warping puzzles and engage in strategic battles with bizarre astrobiological creatures in a twisted environment where the turn-based world and the real-time world collide.

As you progress through three distinct worlds, you’ll need to protect yourself by collecting new abilities and upgrade modules for your ship, but remember, your greatest weapon is SCIENCE itself!

Nova-111 is a turn-based action game with real time elements. Your goal is to use your ship to find all of the scientists hidden throughout the levels so that you can fix the universe. How do you do this? With science!

The game is very fun. The first scientist you find in the tutorial is Dr. Science, and he plays the part of commentator/narrator during your adventure. He has quite the cutting sense of humor. Since one scientist isn’t enough to fix the universe, you will also find more scientists that, while not playing an active role during the game, do have either funny names or plays on the names of real scientists. Schrodinger’s Cat and Air Buddy were two of my favorites. 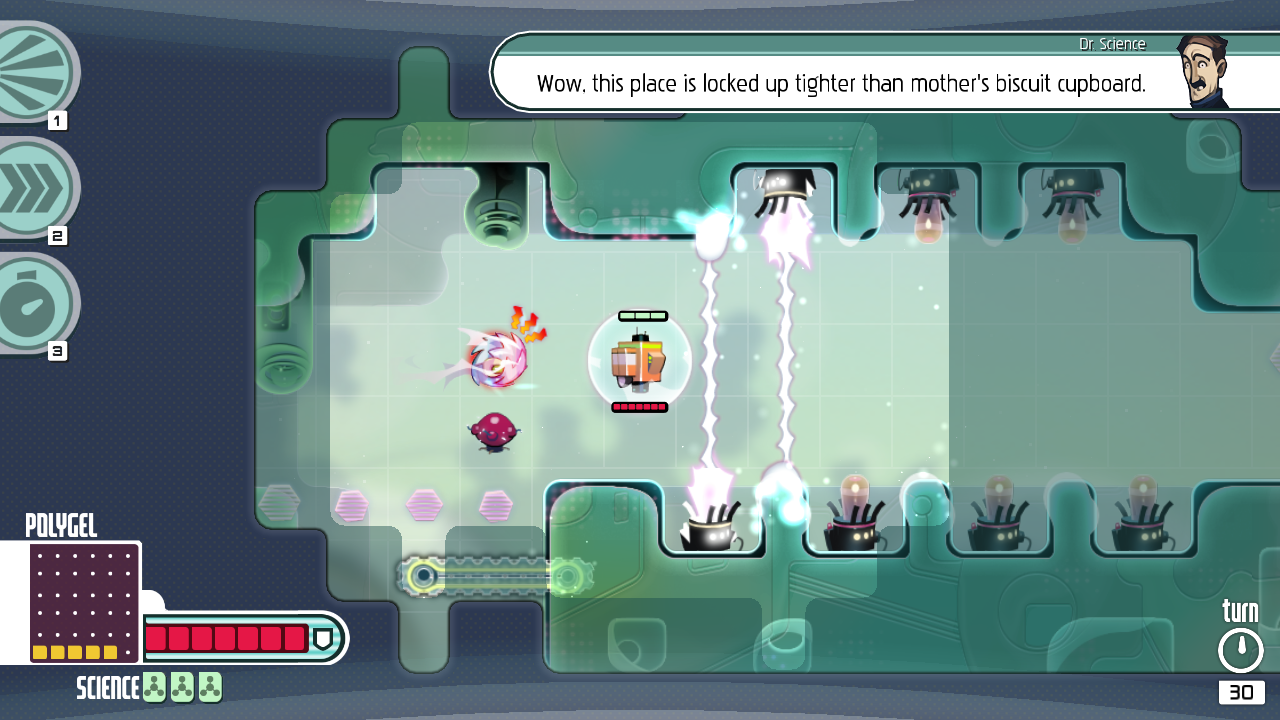 The game takes place on a grid system as you move your ship through tunnels. Everything you do takes up one turn. Initially, you can only move your ship around the grid as you continue to the exit. At the end of the level, it ranks you in terms of turns and the time used to get through. I can see how speed runners might love this part. Early on you will get some extra abilities, including a laser beam for cutting hard rocks and damaging enemies, the ability to phase through things, and bombs that are self-explanatory. You also get the power to stop time later which adds new wrinkles to the gameplay.

To use your abilities though you must make the most of your science. I’d never actually seen science as a unit in a game, but it is a welcome element here. You can use your science to fire your laser or to phase, but then you have to wait a certain number of turns until you can do that again. Later levels will provide you with the ability to have more than one science so you can use more than one ability. It’s a really cool system and having to use turns to refill it makes you not waste any action because you never really know when you need to draw from your mighty science.

What I had the most fun with was the combat. It was almost puzzle-ish as you need to figure out what eery enemy does so that you can understand what the best way is to go after them. Not only can you use your powers, but you can also use the environment. For example, there are stalactites in the ceiling, and those can be used to damage enemies. You can also get them to harm each other with their attacks. And once you can slow time you can even push them into the line of fire of other enemies. 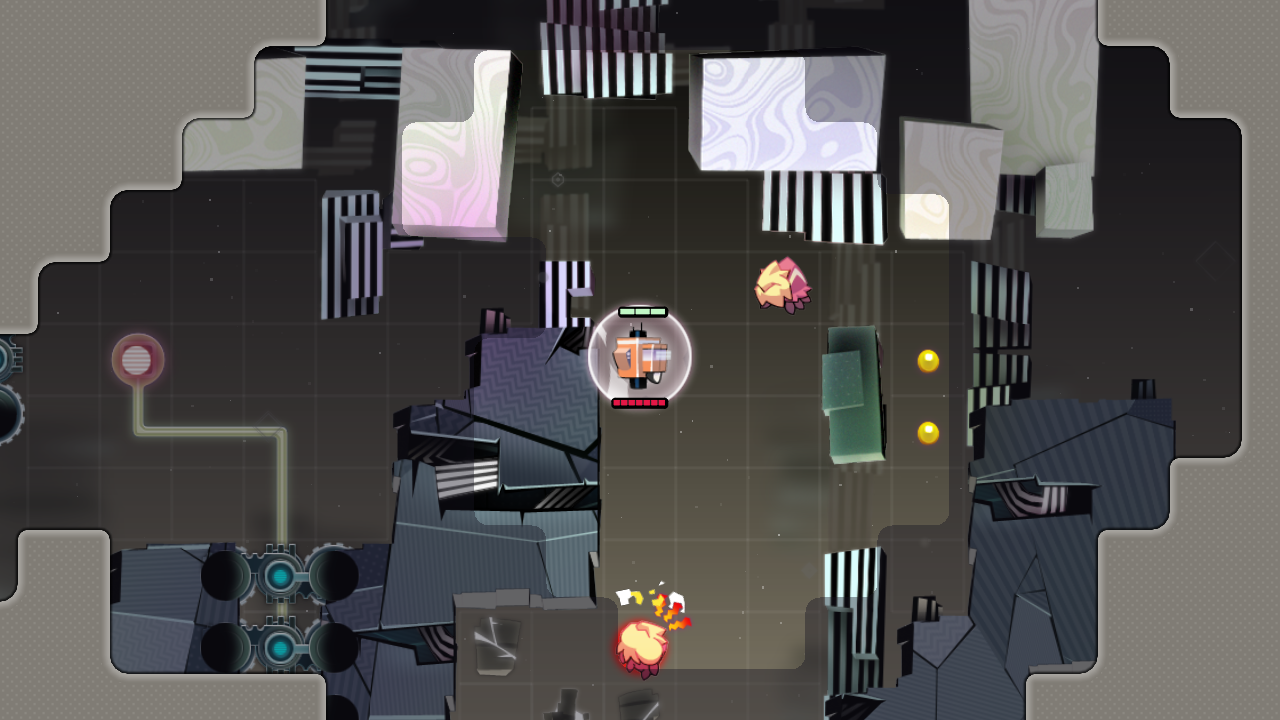 The game looks great with it’s cartoony graphics. It fits the game’s humorous tone and atmosphere. There are three worlds that have a distinct feel. The music fits the theme as well, making me think of some of the older and campier science fiction movies from back in the day.

The game is Cross-Buy, but not Cross-Save, which is kind of a bummer. I was playing on my PS4 and couldn’t move my save over, meaning I had to start from scratch again. It’s not a dealbreaker, but it’s definitely something for you to consider. 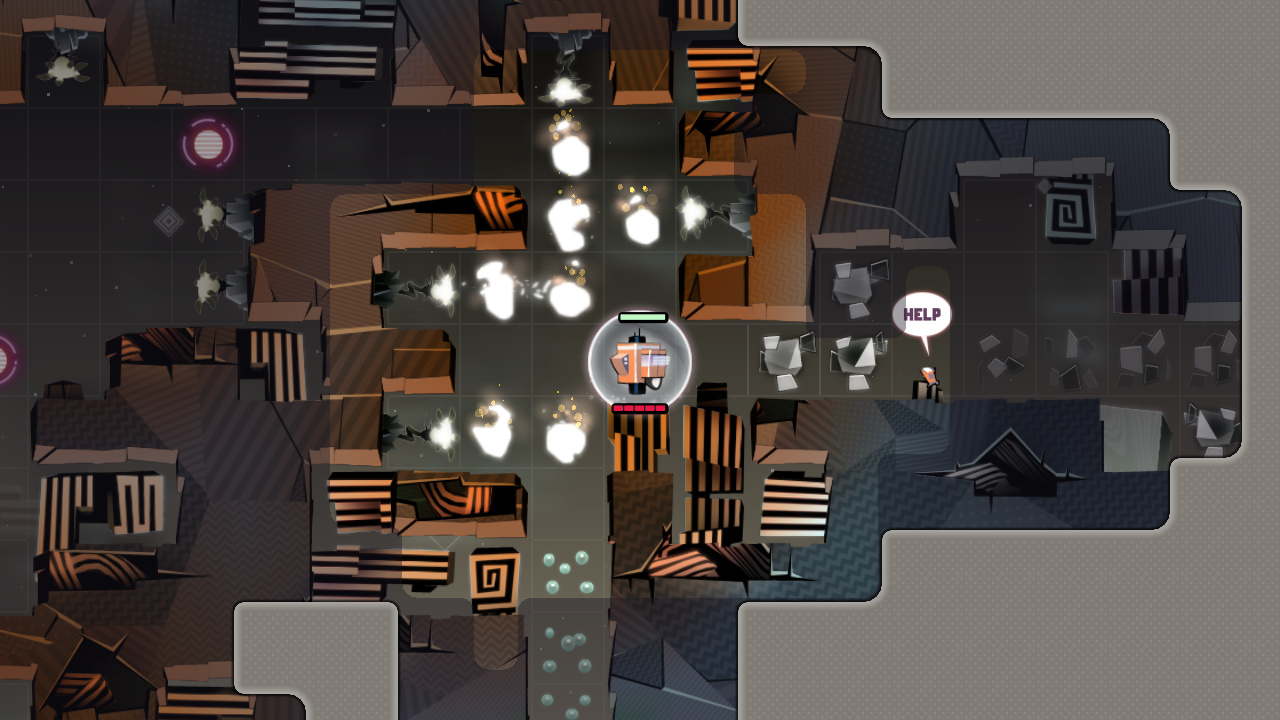 There are 12 trophies for Nova-111, with one Gold, three Silver, and eight Bronze. Most you will get as you play through the game, but they are not related to how much of the game you’ve completed. They are more related to activities in the game and challenges. If there were some trophies for progression, I could have seen the possibility of putting a Platinum trophy in here. Oh, and the Gold trophy will be hard to get as you need to complete the game without taking damage, so good Luck!

I really liked Nova-111, which is interesting because I’m not usually into strategy games, but I do love turn-based RPG’s. This fell right into my sweet spot, and I got some great enjoyment out of it. The game’s sense of humor kept me going as well, driving me to rescue all of these scientists to save the universe.

You can purchase Nova-111 from the PSN store


This review is based on a PS Vita copy of Nova-111 provided by Curve Digital.

The Legend of Heroes: Trails of Cold Steel – Coming To PlayStation 3 and PS Vita 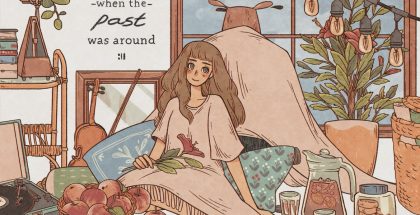