Are you ready for a Shoot’em up that doesn’t take itself too seriously? Then get ready for this one where a GoldFish blasts through waves of enemies just for the halibut!

ShÃ¼tshimi is a randomized shoot ’em up about a muscle-bound fish with memory problems.

Armed with your trusty bullet-morphing shotgun, defeat or make your way through waves of enemies and collect power-ups as you battle your way through each of the game’s bosses. But there’s a catch (there’s always a catch): you’ve been cursed with an incredibly short attention span. Combat waves and upgrade cycles only last 10 seconds a piece, so you’d better act fast!

â€¢ 10 second bursts of shoot â€˜em up action!
â€¢ 6 different bosses!
â€¢ 5 different, upgradeable weapons to choose from!
â€¢ Over 30 upgrades to collect! Combine upgrades with different weapons for interesting combinations!
â€¢ Hats! Over 30 of them! Some hats unlock hidden ‘Hattributes’ which modify gameplay even further!
â€¢ Leaderboards! Compete with friends and foes for the top score!
* Local co-op!

Shutshimi was developed by Neon Deity Games and published by Choice Provisions (formally known as Gaijin Studios) which created one of my favorite time wasters in BIT.TRIP Presentsâ€¦ Runner2: Future Legend of Rhythm Alien. Runner 2 was a great game to pick up and spend a few minutes with that you could then pick up easily later. Luckily, Shutshimi follows a very similar formula were you can play in short bursts or for long sessions as you please.

Shutshimi is a side-scrolling Shoot’em Up with one catch…. You only have an attention span of 10 seconds. This leads to an interesting experience because everything is on a shorter schedule. Every wave of enemies lasts for 10 seconds, making each a very chaotic and tough challenge. The game actually reminds me of the Warioware titles from Nintendo, which I loved for how quick and short they were. 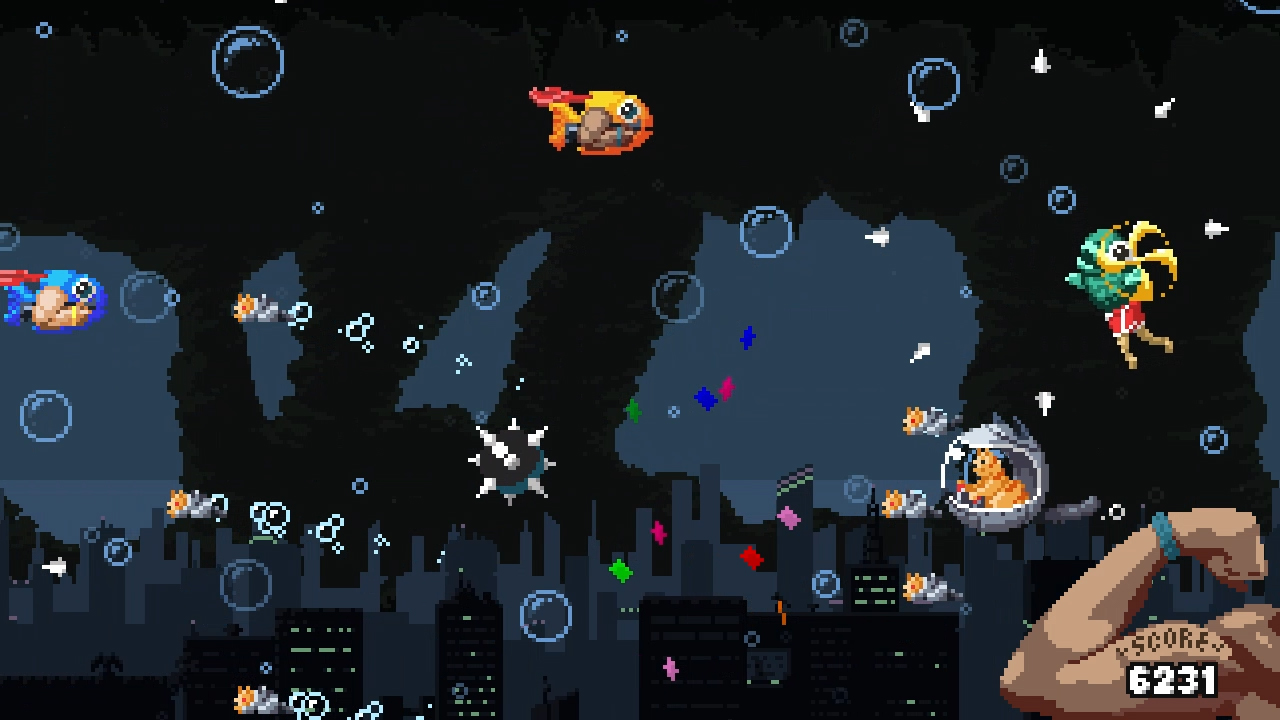 The replayability is where this game really succeeds. 10 seconds per wave doesn’t sound like much, but they add up quickly, especially since each wave is randomized a bit. After each wave, you get 10 seconds to select some sort of modifier that will change the next round. These can include changing your weapons to bigger blobs, cannon balls, lasers or a shotgun, or it can also slow down your bullets down or speed them up. This is only the beginning of the modifications, though. Other ones include inverting your controls, inverting the screen, turning on a party mode, putting you in a bouncy castle, adding more enemies to the wave, playing longer rounds and more. It’s kind of ridiculous, in the best possible way. My personal favorite was the butt mode where all the enemies that wave are surfing butts with sunglasses on while butts float around in the background. Pure. Awesome.

That being said you only get 10 seconds to make a choice on the power up and each one is attached to some verbose text, so it’s not a lot of time to choose. However, once you start to learn which ones are good and which ones are not, you can speed up the process and make the most of your 10 seconds .

I also want to talk a bit about the hats that you can earn for your fish. There are tons of them for you to select, and they will have different effects on your character. Two of my favorites were the top hat that made all of the enemies British and the glasses that put a pair of glasses on the screen on top of the action. 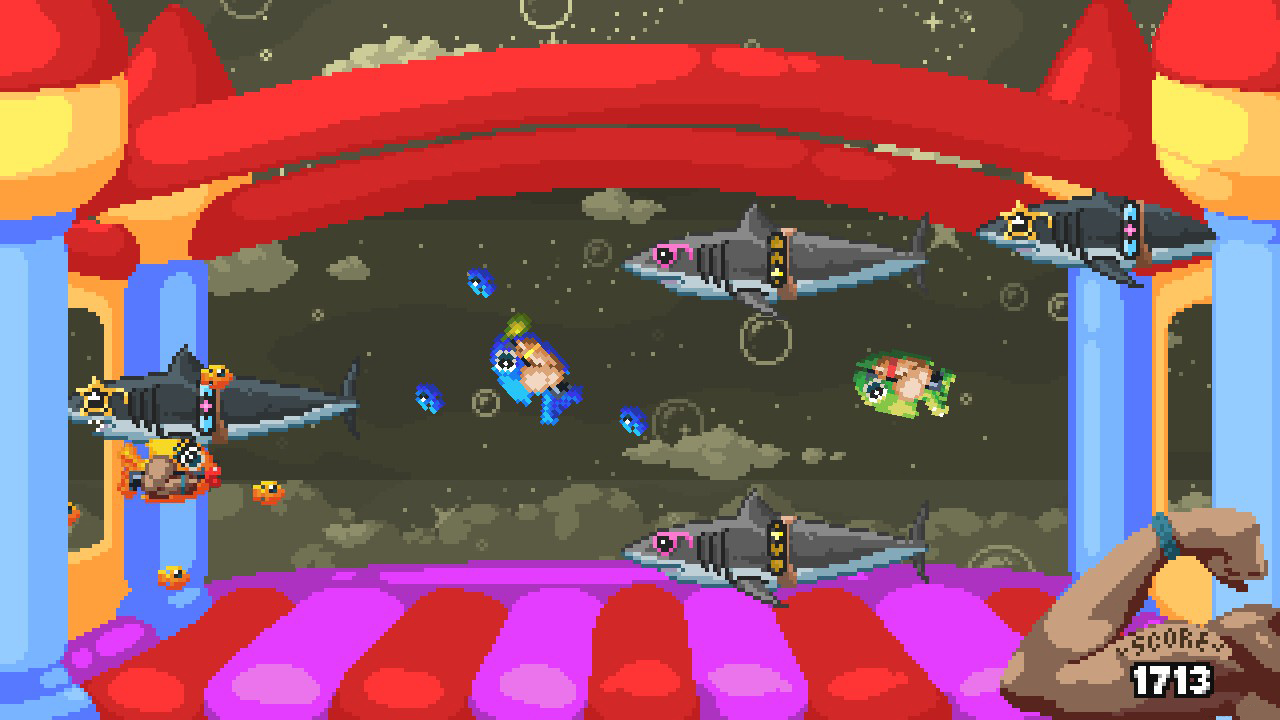 The game itself looks just as ridiculous as you would expect. Your main character is a goldfish with muscle arms and guns. Enemies range from squid, sunglasses-wearing sharks, cats in subs shooting kittens in bullets, to bears that curl up into a ball resembling Sonic the Hedgehog. This is only the start as there are many other crazy enemies, including some killer bosses. Some of the bosses are a giant sub, an undersea dragon, and some sort of octopus. You still only get 10 seconds to fight them, so if you don’t beat them, you continue your battle – including damage done – during your next encounter.

So here’s the deal with Shutshimi: you are going to die. A lot. Enemies hurl many things at you, which will be your doom until you learn how to play, anticipating their attacks. But even then you will still die, and that’s the beauty of the game. You will keep pushing for a higher score and to get through more waves, and you can spend a few minutes or a full hour playing non-stop at a time.

The game looks like a cross of a game on the NES and one on the SNES. It has an old-school feel, which is great as the Shoot’em Up is one of gaming’s oldest genres. Everything moves fast and controls are precise, so when you die you know it’s your fault. The music uses chiptunes thus giving it that authentic older feel. Overall, the music and sound effects are very rad and catchy. 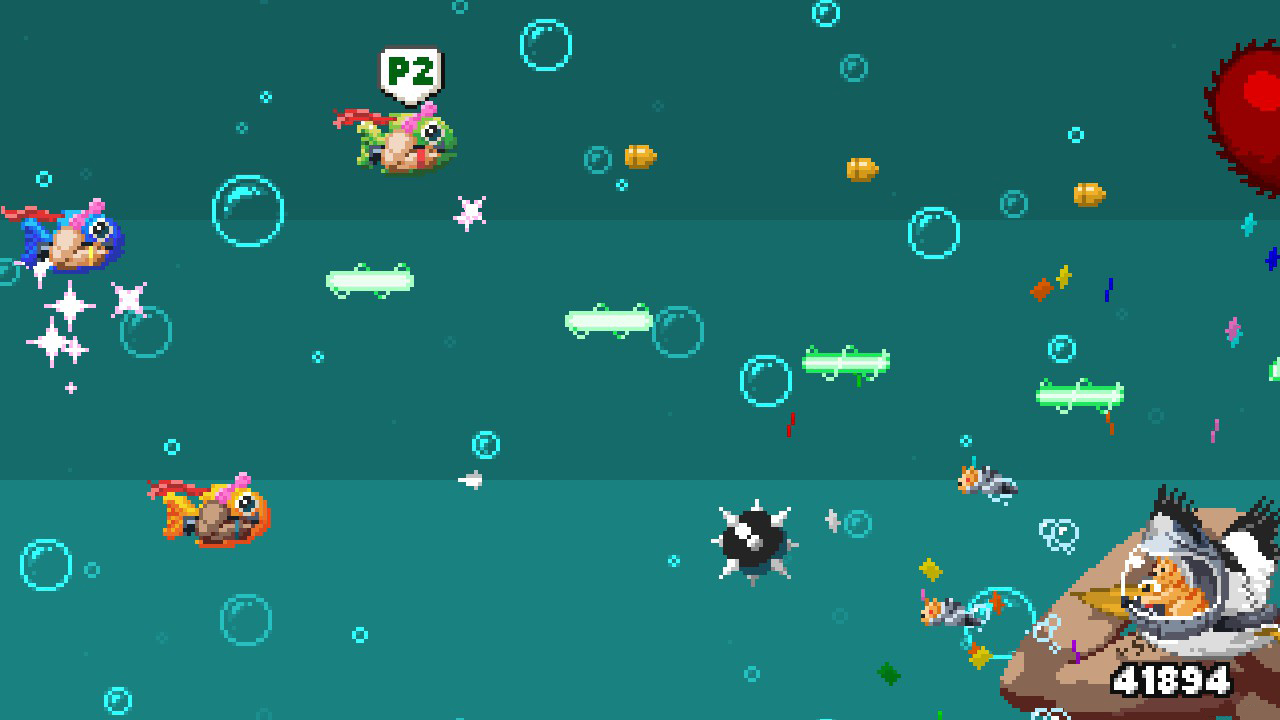 The game contains 12 trophies: 1 Gold, 3 Silver and 8 Bronze. A few are for completing the game and the boss rush mode while most are for doing random things with the upgrades in the game. It might take a bit time to get them all due to the random nature of the game, but I’m sure that dedicated gamers will 100% this game and love it.

The Vita version plays identically to the PS4 version in every aspect. The Cross-save feature works well storing your progress and scores so that you can put down the small screen when going to the big screen and the other way around. The Vita is a great way to play this game as you can take it on the go, and you don’t have to commit to playing for long bursts. If you have both systems, then you are in for a real treat.

Shutshimi is a great shoot’em up, and a fun game to play on PS4 or Vita. The game’s ridiculous nature keeps you entertained in a “what’s coming next” sort of way. The gameplay is tight, and the game controls well. You will be dying and restarting over and over and over, and you’ll love it. For $9.99 this game is a steal, and it will keep you playing for a long time.

You can purchase Shutshimi from the PSN store