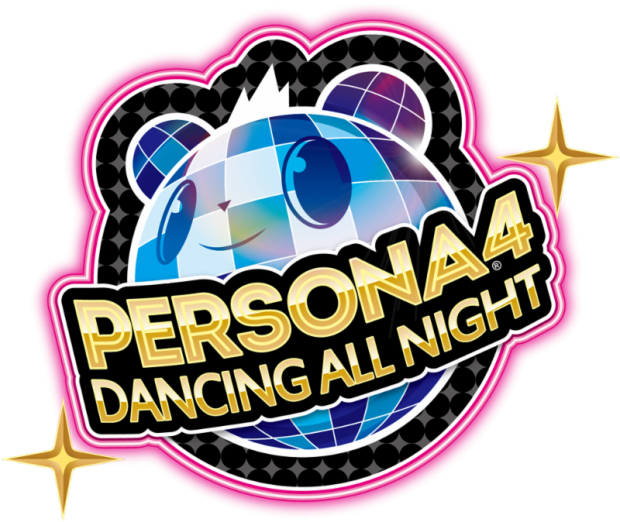 Persona 4: Dancing All Night is a story-driven music game that takes place after the events in Persona 4. Players get pulled onto the Midnight Stage when the spotlight turns to mega-idol Rise and her junior group, Kanamin Kitchen. Members of Kanamin Kitchen have disappeared and it’s up to the Investigation Team to mount a rescue mission – only they discover the same monstrous Shadows from the Midnight Channel. To make matters even worse, their Persona abilities are rendered ineffective, and the Shadows in P4D can only be defeated by dance, so bust out powerful dance moves to save the day!

The game’s story goes like this: the group from the Persona 4 series is back to normal (as normal as you can be after the events from Persona 4 Golden and Persona 4 Arena-Arena Ultimax, which means that Rise is back to her life as a pop idol, trying to make a “comeback” so to speak at the Love Meets Bonds (LMB) festival. Since her friends aren’t fighting shadows or investigating any weird scenarios, Rise figures this would be a great time to get everyone involved in what she does for a living, so she invites them to participate in the LMB festival to dance, dance, dance. After the events from all the Persona 4 games up to this point, this being a dancing game is definitely not the weirdest thing in the series! 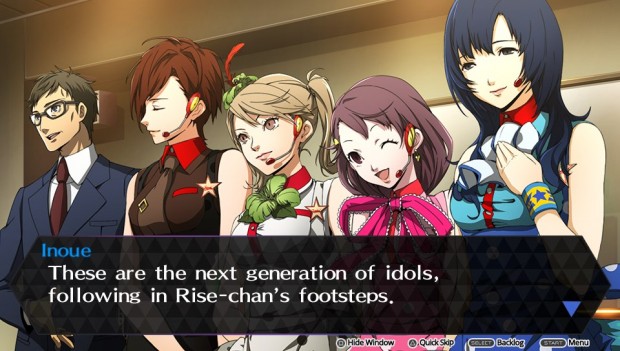 The game’s Story Mode then kicks off by introducing J-Pop idol group Kanamin Kitchen made up five members who are younger than Rise and who are basically “the next best thing” in the industry. All is going great for the first few minutes of Persona 4: Dancing All Night, but this being a Persona game, there’s bound to be something that will go very wrong. 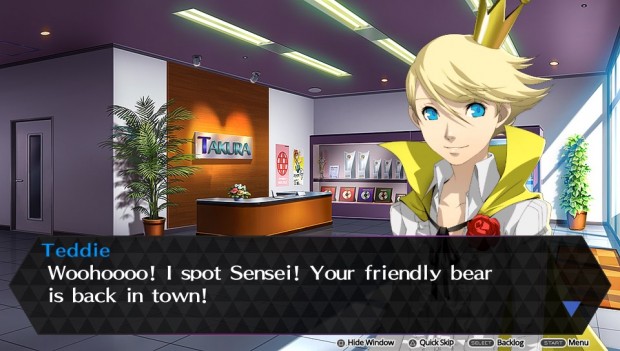 Turns out there’s a rumor about how if you access the website for the LMB festival at midnight, Being familiar with the Midnight Channel and the TV world, Rise, Yu and Naoto decide to corroborate this rumor by visiting the website. As you can imagine, the rumors are true, and they are taken into something called the Midnight Stage (because of the dancing theme) where no once can get hurt. This means that even though they can summon their Persona, they can’t use them to attack the shadows that are tied together with a yellow ribbon. A mysterious voice lets them know that they are there to unite with everyone to strengthen their bonds… which is evil talk for “we’ll tie you down and slowly suck your soul away so that you can stay with us forever.” 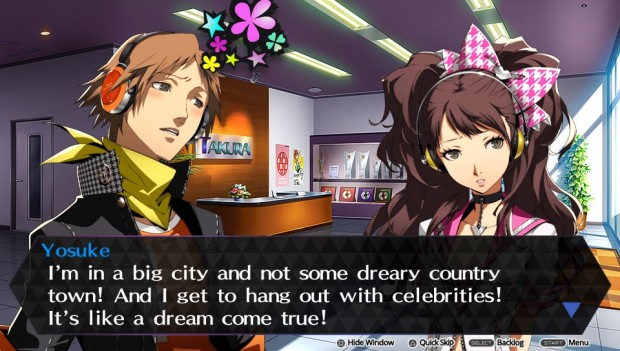 If that wasn’t bad enough, four of the members from Kanamin Kitchen go missing under mysterious circumstances. Since Rise, Yu and Naoto are already at the studio where the girls go missing, they decided to start investigating since the rest of the team won’t show up until the next morning, as per their rehearsal schedule for the LMB festival. Once the crew is together, they witness how an evil black hole materializes out of nowhere to try and take Kanami away, and it’s not even midnight! Luckily the LBM festival’s producer shoves Kanami out of the way before she’s taken, but this means that the Investigation Team must now jump into the Midnight Stage to save the four missing members of Kanamin Kitchen AND the festival’s producer before they’re tricked by the mysterious voice in the Midnight Stage to stay with her and the shadows for all of eternity! 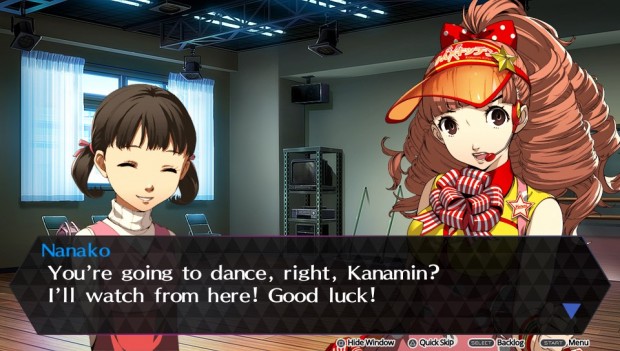 That’s as far as I’ll go with talking about the game’s story because, as was the case for Persona 4: Arena and Persona 4: Arena Ultimax, the story in Persona 4: Dancing All Night is 100% cannon, which means that it IS part of the whole Persona 4 universe and not a side-story, and we all know that the story of the Persona games is one of its strongest points. 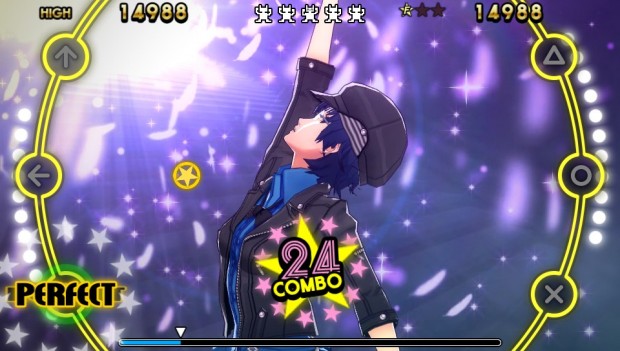 Now, let’s talk about the gameplay! Persona 4: Dancing All Night isn’t just about hearing the cast during all the story segments, it’s also about dancing to the beat to show your true passion and feelings to make the eradicate the shadows! The game features a ton of songs from the Persona series remixed to fit the game’s style as well as original songs created specifically for Dancing All Night. The game’s rhythm element comes into play during the gameplay sessions where players must use the up, left and down inputs on the D-pad as well as the triangle, circle and X buttons on the PS Vita and tap them to the beat to match the yellow circles that move from the center towards the edge of the screen. There’s also Green H (hold) Notes where you must hold the corresponding button until the end of the note, and there’s also purple U (unison) notes where you must press two buttons at the same time. Oh, and on top of this you can use the left or right analog sticks to trigger blue rings that travel to the edge of the screen as well as colorful FEVER rings that behave in the same way. 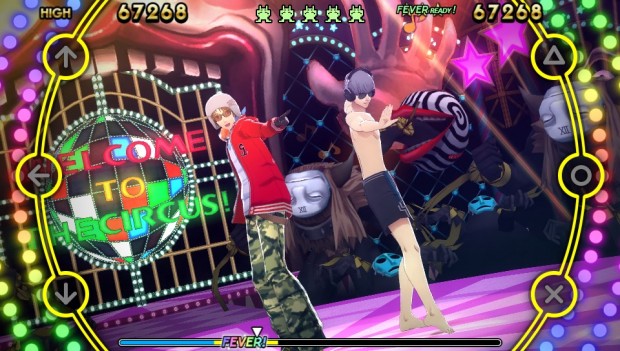 Got all of that? Great! If you’ve played a rhythm game before, you’ll feel right at home with this setup. The larger your combo (that is, the more notes in a row that you clear without a miss), the higher your score, and the better you do at not missing any of the FEVER rings, the better your odds of unlocking each songs partner mode where a second character joins in on the fun and dances his/her worries away along with the character you’re playing as. Miss too many notes, and the crowd will not be happy, which means the shadows and their weird yellow ribbons will create a bond with you. 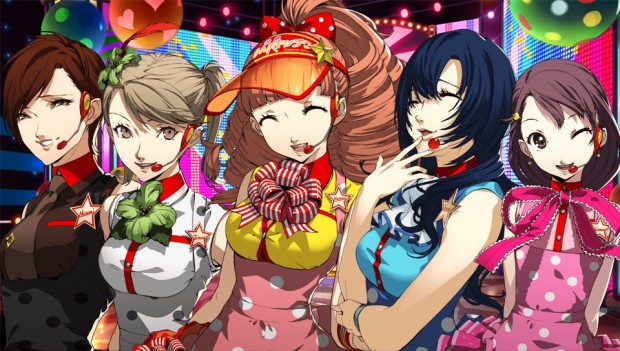 The game’s Story Mode could be seen as a visual novel with some dancing thrown in for good measure, and you can finish the story mode in around 7-8 hours or so. But your fun isn’t over once the credits roll for Persona 4: Dancing All Night since you’ll still have a lot to do in the game’s dance mode where you can replay every song with different difficulty settings as well as by activating any of the items you unlock which will change your approach to each song no matter how much you’ve practiced them before since you can, for example, slow down or speed up the notes speed, or make the notes disappear completely, but this will also allow you to earn more money to purchase all the clothes and accessories available from the store! 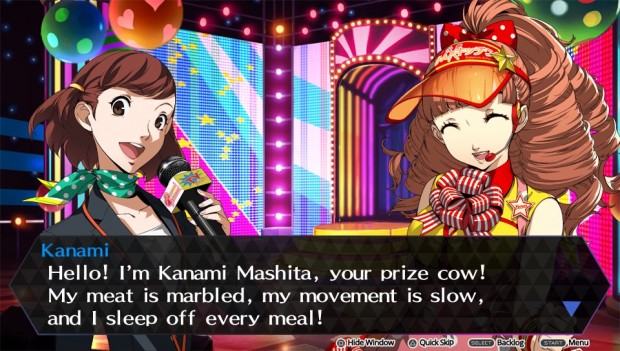 As expected, Persona 4: Dancing All Night features a full trophy set, so you’ll have a shot at aiming at adding this coveted Platinum trophy to your collection! This being a rhythm game, it does depend a bit on your skill level, but overall it’s not a hard Platinum to get (just a long one to get since it could take you up to 20 hours or so to unlock every other trophy!). 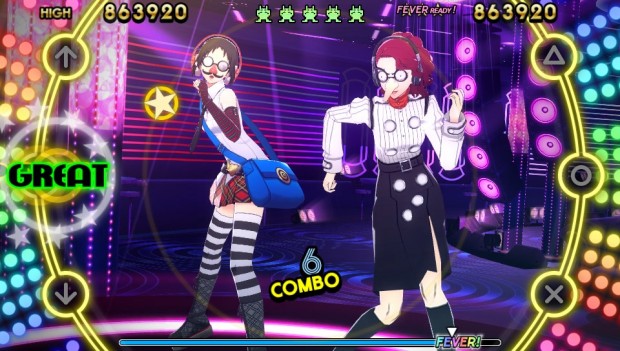 Being a Persona 4 fan, I had a great time with Persona 4: Dancing All Night. The dance mechanics are fun, and the songs are a very strong element that greatly complements the action, which is a must for a rhythm game. The Story Mode is good, and the fact that this is now cannon helps to expand on the lore from Persona 4. You don’t need to have played Persona 4 (or Persona 4: Golden), watched the anime or played the Arena or Arena Ultimax to enjoy Persona 4: Dancing All Night, but those of you who have will definitely get the most out of this release due to all the fan service included with your purchase. 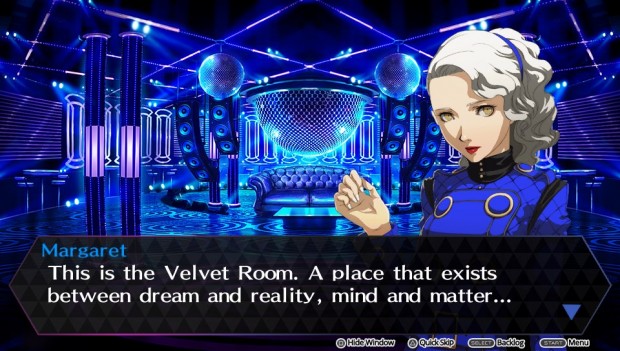 This review is based on a digital copy of Persona 4: Dancing All Night provided by Atlus.