The Order of the Stone is the first episode in Minecraft: Story Mode, an interactive story set in the Minecraft universe created by Telltale Games and Mojang. Minecraft (the original game) being a game without any story at all, Telltale could have really taken the story in any direction.

Before reading any further, take note that I’m a Minecraft enthusiast who has played well over 400 hours with my friends, building a ton of different structures, tunnels, underwater palaces, etc., so I was definitely VERY happy when this was first announced, and my hype level was high. Read below to see what I thought of this new release!

As has been the case with other reviews for Telltale Games’ episodic releases, this review contains some spoilers about the story. Are you ready?

As the episode begins, we are slowly introduced to the characters that will play a large role in this great adventure! We are introduced to Jesse (that is you, the player), Olivia and Axel (two of Jesse’s friends), and Reuben, his pet pig. By the end of the first episode, I had already started to like these characters and cared for them! 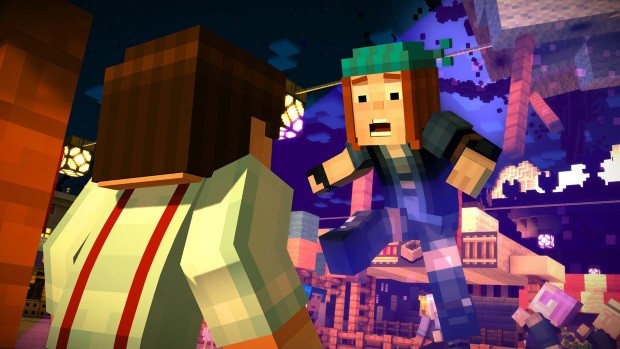 The game begins as Jesse, Olivia and Axel are participating in an event called the Endercon Building Competition, which asks the participants to build the best structure ever. Of course, the group is aiming to win, but it quickly becomes evident that the other teams outmatch them. An incredible set of events unfolds and then something REALLY bad happens that could spell the end of the world! I’m trying to stay as spoiler-free as possible, but from what I saw so far, Minecraft: Story Mode is shaping up to have a pretty good story.

Minecraft: Story Mode makes a ton of references to its original material, which probably will be lost on people who didn’t dive deep enough into the Minecraft universe. The look-and-feel is totally Minecraft and features blocks, enemies and items from said universe. Speaking of which, the animations of the characters and enemies is way better than the original game! Oh, and on a HIGHLY positive note, this game seems to be running on an upgraded version of the Telltale Game Engine because I didn’t have any frame rate drops as was the case in Game of Thrones and Tales from the Borderlands. I’m very pleased to see that this game does not suffer from these technical issues!

Finally, I noticed that the gameplay seems richer than other Telltale games, and it’s definitely a fun experience! The voice acting is pretty good, and the soundtrack is something we could find in the original game. Of course, this episode finishes with an impressive cliffhanger, and that means that waiting for the next episode will be even harder! 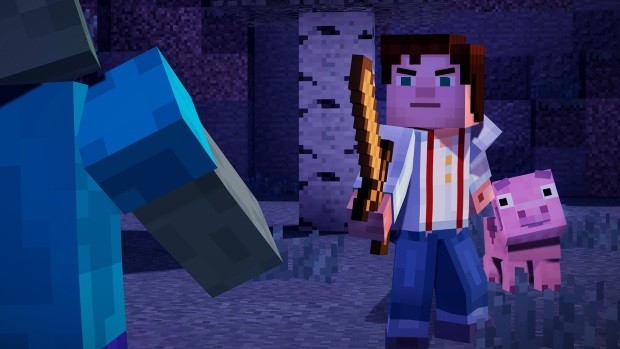 Final Thoughts
I didn’t know where Minecraft: Story Mode would lead us since Minecraft is somewhat an empty canvas story wise. After this first episode, I must say that I’m pretty excited to see the following ones!

New Trailer For Tales From The Borderlands Season Finale