Are you ready to experience the sadistic carnival? Well, you better be… because you have no choice. Welcome to the terrible world of Penarium.

Penarium is set in a sinister circus arena, where contestants, much like Gladiators of old, are forced to entertain a sadistic crowd. In this frantic 2D arena arcade game, you take on the role of our quirky antihero Willy who, to survive, is forced to run, jump and avoid an array of killer death-traps. Succeed and Willy will become the Champion of Penarium. Fail and he will die in a most horrendous way, much to the delight of the baying crowd.

Penarium is an interesting game with a simple premise. You star as Willy, who decides to join a carnival passing through town. Little did he know that he had joined Penarium, the sadistic carnival… and he is not their featured player. Oh boy, is Willy in trouble!

Willy is trapped inside an arena, and he must complete all objective set for him whether it’s grabbing barrels, staying in a spotlight or grabbing things from the air and putting them in the right pots. This sounds easy, right? WRONG! To make this harder, there are a myriad of weapons that the arena will throw at you from the top and the bottom, all to please the adoring crowd. 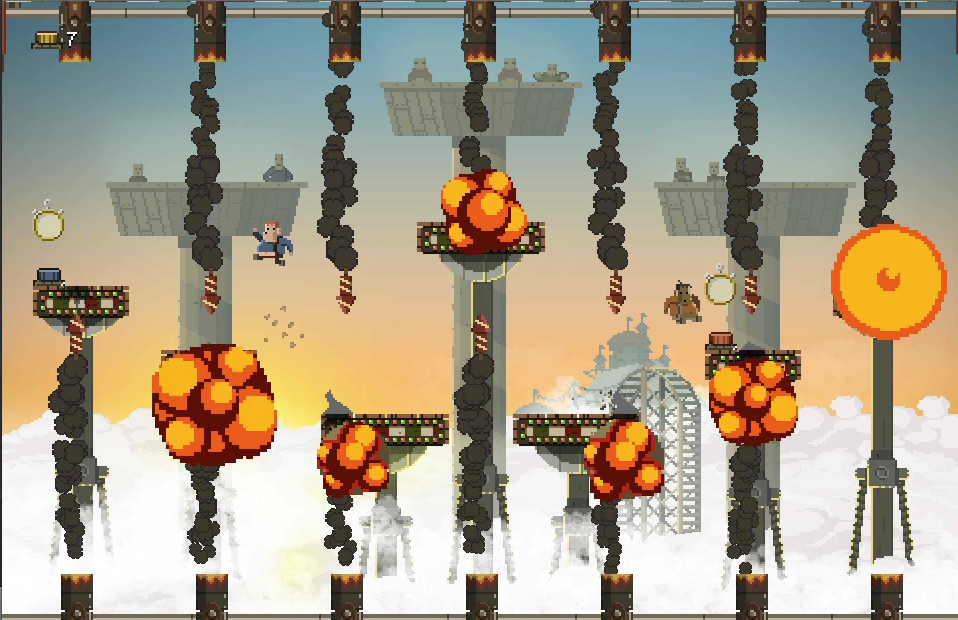 The game itself is very simple. The arena is a single screen, and when you hop off the right edge, you appear on the left side. You can also do a double jump to reach higher platforms. That is it for the controls. The not dying part is the difficult situation. You will die. A lot.

You have two modes available to you, Campaign and Arcade. Campaign puts you through the circus adventure. There are 30 levels of pain that need to be beaten. They start up deceptively simple, but as you progress the difficulty spikes noticeably high and quickly. I noticed it personally on a challenge where the character had to stand under a moving spotlight for so long while moving and avoiding the death traps. If you get good, you can have this whole completely done in a little over two hours.

Arcade Mode is more old school – one life, and then it’s over. You try to survive for as long as possible in the arena where everything can end your life. It’s your basic survival mode where you need to avoid stuff. As you smash the barrels in the modes, you get coins that you can use to purchase power-ups. I enjoyed both modes, but since the campaign isn’t really that long, Arcade Mode is where you will spend a lot of your time.

The real star of the show though are the inventive death traps in the game. It will use missiles, homing missiles, bees, icicles, saw blades that buzz around the platforms, goo that will slow you down, even Chinese dragons that fly through the level killing you instantly. I was always wondering what would be thrown at me next, which was a good thing. As you get to know the weapons and how they work, you also get better at avoiding them.

As mentioned earlier, this game seems like an old-school throwback to a gone era, not just in the gameplay mechanics but also on the way it looks. The game is more colorful than the older 8-bit titles, but the ascetic is there. The beauty though is that it controls precisely, which is always great in games with this degree of difficulty – when you die it’s your fault, and no one else is to blame.

The game has 21 trophies, all Bronze. A good number of the trophies are awarded for collecting coins and for killing Willy as many times as possible. You will get a bunch for going through the Campaign Mode, but that is it. I was surprised to not see any Golds or Silvers, especially with the degree of difficulty for the game near the end of its campaign mode.

Penarium is a deceptively simple game. It looks easy, but it is very challenging and rewarding. There is some good fun for both short and long gaming sessions, making the game easy to pick up and play no matter how much time you have. For $9.99 I think this is a worthwhile purchase and an easy add to your collection.

You can purchase Penarium from the PSN store


This review is based on a PS4 copy of Penarium provided by Team17 Software Ltd.

Sale of the Dead Is Now Live!