Are you ready to get blown sky high? Then welcome to Bombing Busters! Time for you to explode your way to becoming ruler of the galaxy!

Have a blast! Bomb oodles of nasty critters in a series of 30 wicked mazes! Defeat hellish bosses in heroic fights! Play solo or against other players in merciless battles! Embark on a hilarious journey with the witty Dr. Wallow to conquer the galaxy in this explosively fun arcade game!

Key features:
â€¢ 5 picturesque worlds with 30 wicked mazes.
â€¢ A huge bestiary of critters to blast.
â€¢ A multitude of items and power ups to collect.
â€¢ 5 hellish boss levels whose punishing difficulty will only be matched by the satisfaction youâ€™ll get once you beat them.
â€¢ A hilarious single-player adventure where you help the witty Dr. Wallow get rid of all the critters and become the ruler of the galaxy.
â€¢ A fully customizable battle mode up to 4 players offline or 8 players online.
â€¢ Over 10 minutes of caustic comments from Dr. Wallow, voiced by David Goldfarb.
â€¢ 7 famous pieces of classical music electronically butchered by Samuel Safa.

Let’s discuss the elephant in the room about this game, because if you’re an older gamer like me, then this game will look very familiar. The game is essentially a Bomberman clone from the early and mid 90’s. Hudson used to own Bomberman, but ever since Konami bought Hudson, there hasn’t been anything new from said franchise. This left the door open for someone to take the formula and release something that was different but similar, and we now have Bombing Busters!!

If you are not familiar with the gameplay that Bombing Busters employs, then let’s go over it. You control a robot that lays down bombs in a maze. You need to use the bombs to destroy the barriers in your way that keep you from exploring the maze to defeat the multitude of enemies that are waiting for you. Along the way, you will get power-ups that will make you faster, your bombs more potent, as well as lay more bombs at a time, to name a few. 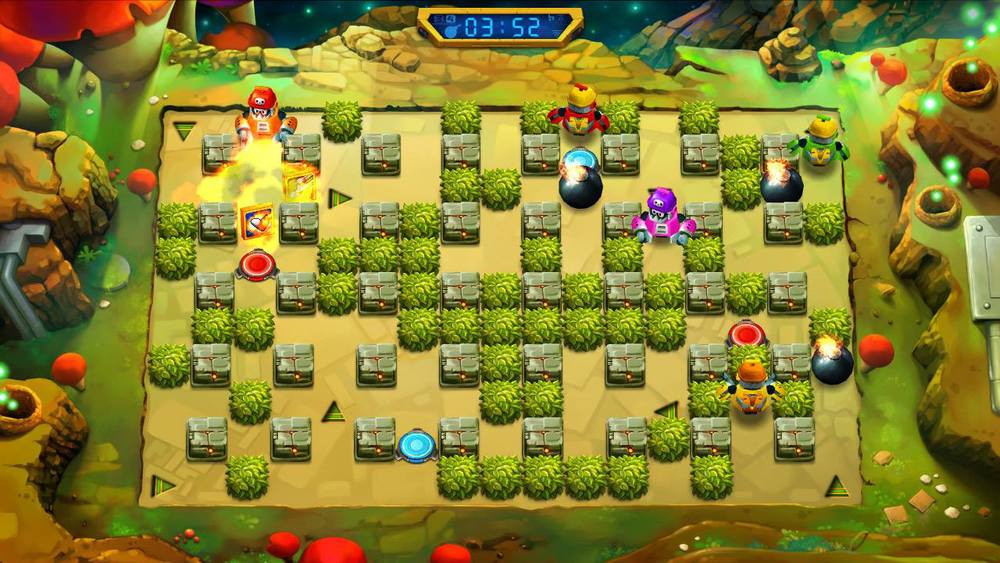 What I ended up having an issue with was the AI for the enemies. I found the regular enemies very frustrating to play against. For example, the turtles in the second level of the game know exactly how to avoid your bombs. They will put themselves wherever your bomb blast won’t be, and they will even stop moving and hide in the one spot that won’t get blown up. Even when I setup multiple bombs and had it trapped, thanks to the few seconds delay between when I lay my bombs and when they exploded, the enemy waited for one to blow then got out of the way on the other one.

I also found that I would trap myself by accident, not being able to get out of the bomb’s blast, causing my death. I actually think I killed myself by committing suicide, more than being attacked by the enemies in the world. The other issue I had is that there is no life bar. You get hit, you are dead. It made the matches very inflexible and for small mistakes you often found yourself repeating the level again. 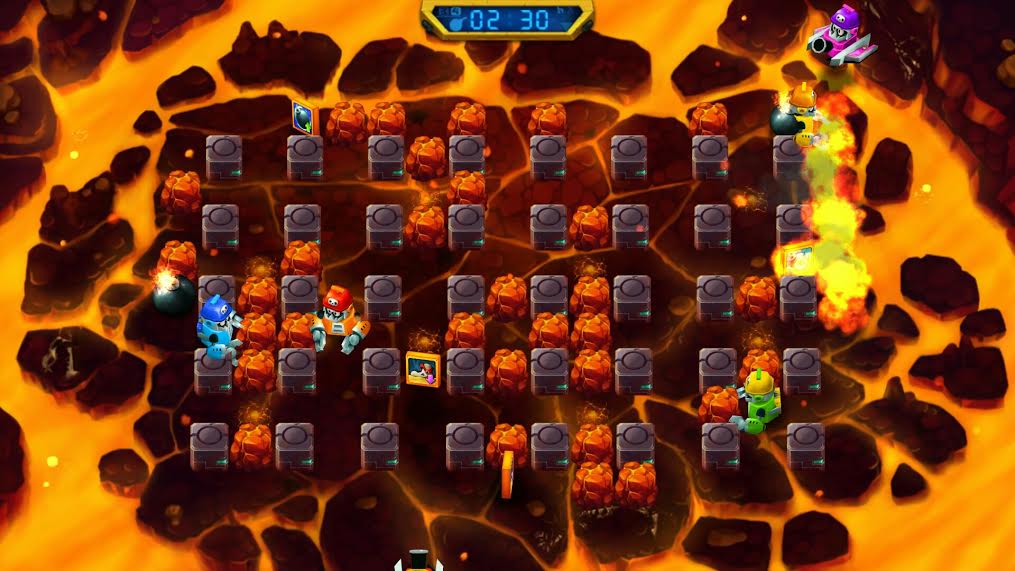 The game itself is divided into five worlds with six levels in each world. As you complete them, you are scored on the 3-star system, making you want to go back and complete each level again to get a higher score. Each of the worlds has a unique theme to them whether it be fire, ice, fairy, wind or spark. Every level in the world has the same theme, but how they are laid out with obstacles and enemies makes each one different. The environments look good. They definitely give you the feel for their themes.

I was really looking forward to the multiplayer mode, which is where I thought this game would shine. Unfortunately, I was only half right. You can have up to four players locally – which is very fun, making this a great couch co-op game – or you can take on eight player online matches which sounds great, but getting connected to an online match was an issue as I could never find people online to play with. 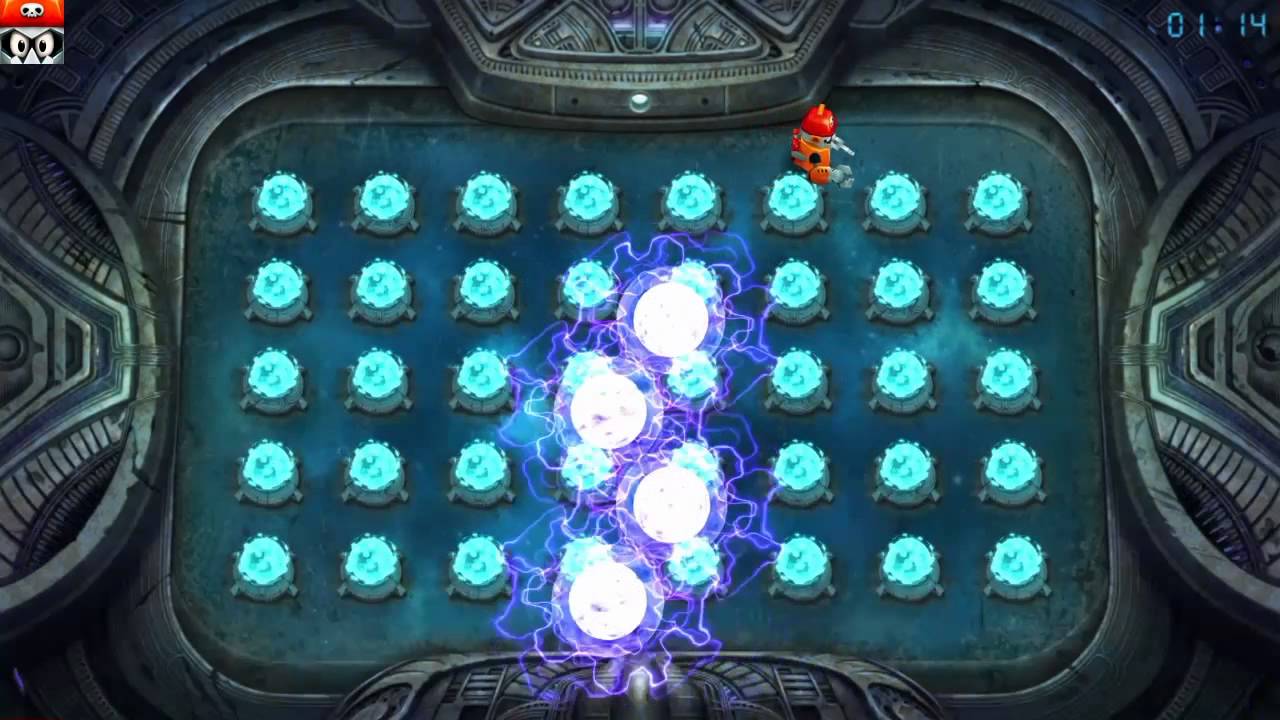 The game has 13 Trophies: 1 Gold, 1 Silver and 11 Bronzes. They are based on progression throughout the game, as well as for achieving three stars in all of the campaign levels. Most trophies will be easy to get, but the one for three stars on every level will be time-consuming.

Bombing Busters was a game that I was hoping to enjoy. I really enjoyed playing with people locally, but found the AI in the campaign frustratingly smart. It would have been great to be able to connect with people online, but as is always the case with new games, the online community just isn’t there. The game is only $6.99, so it’s easy to recommend as a fun party game when people come over, but playing solo may not be as fun.

You can purchase Bombing Busters from the PSN store

Who Wants To See The New Ratchet & Clank Movie Trailer?