Tales from the Borderlands Season Finale: The Vault of the Traveler PS3 Review

The Vault of the Traveler is the last episode in Tales from the Borderlands, an interactive story set in the Borderlands universe. Concluding the events of the whole season, the team finally reaches The Vault and discover its secrets.

This episode continues the story of Rhys and Fiona along with the friends (and enemies) they have made during their journey. As has been the case with other reviews for Telltale Games’ episodic releases, this review contains some spoilers about the story. Are you ready?

In the final episode of the season, all hell breaks loose. Jack is now in control of Helios’ systems, and he’s ready to reclaim his rightful place as king of Hyperion (with or without you). It’s a mad dash to get out of the chaotic space station alive, as everyone scrambles to grab the final Gortys piece and high tail it back to Pandora. Can you guide our ragtag team through perilous corporate dangers in hopes of getting some sweet alien riches? Loyalties will be tested, secrets will be revealed, and explosions will be in large supply in this climactic chapter of Tales From The Borderlands! 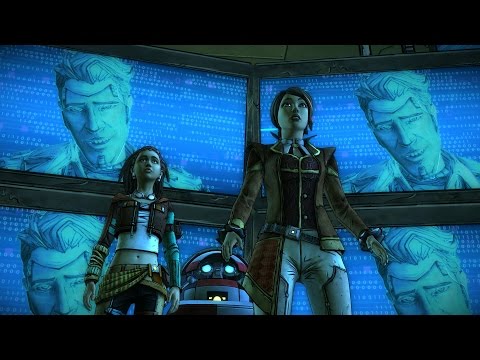 Right off the bat, let me start by telling you how hilarious this episode was. I think in fact that The Vault of the Traveler was the funniest of all episodes. I had just started playing and during the first two minutes the game had me laughing with a conversation between two characters! I played most of the episode with a big smile on my face even though his episode is particularly intense and action-packed. In this episode, you’ll discover the true intentions of Handsome Jack as his plan is exposed. Of course, things will go haywire from this point on, and a lot of action segments involving quick-time events will happen. And, as expected from a season finale, a lot of choices and decisions made in earlier episodes came back to bite us in the ass!

Near the end (and as I was hoping), a super epic boss fight takes place, but due to the performance issues encountered for this game in the Playstation 3 version, the game froze a lot while it was loading. It got as far as breaking the momentum of some action scenes for me. Final Thoughts
As I mentioned, I think this episode was the funniest yet, but also the one with the worst performance issues on the PS3 hardware (mainly because it has so many action sequences). Since this last episode is built on the same engine as the other episodes, that was to be expected. I hope that Telltale Games considers doing a second season for Tales of the Borderlands since they’ve done an amazing job with the Borderlands universe.

But even with the technical issues, Tales from the Borderlands won me over, and for me it’s definitely a contender for Game of the Year!

And another thing that will please trophy hunters: a Platinum trophy is awarded for completing the game, exactly as was the case for Telltales’ The Walking Dead Season 1 and Season 2.


This review is based on a digital copy of Tales from the Borderlands: The Vault of the Traveler provided by Telltale Games.

The Second Week of The Sale Of The Dead Is Here!