Hello, gamers! If you own a Nintendo 3DS as well as your PlayStation console/portable of choice, it’s time to whip it out and enjoy our very first Beyond PlayStation review! Shin Megami Tensei: Devil Survivor 2: Record Breaker is a sequel to Devil Survivor, and is also a revamped version of the original Nintendo DS title with all features remaining the same while also including some new features such as the Fate System and the Triangulum Arc campaign, both of which I’ll discuss in this review.

Shin Megami Tensei: Devil Survivor 2: Record Breaker tells the story of three Japanese students who download a video app called Nicaea and enter into a pact that enables them to become devil summoners, calling on demons to fight alongside them. During your adventure, you’ll travel the land, meet new party members and learn great skills to aid you on your journey.

The game includes two campaigns. The first is the Septentrione Arc, which is the original campaign from Devil Survivor 2 on the Nintendo DS. The second campaign is the Triangulum Arc, and it is based on the events that happen AFTER the Septentrione Arc, so basically it’s a continuation of the original story. You do not have to play any of the previous Shin Megami Tensei titles to play this one as they are not connected, so feel free to jump right in!

Unlike the original version that only had one difficulty that made the game near impossible even for hardcore players, this revamped version has included an easy mode called Blessed. Apocalypse (the original difficulty) is still included for those who were able to complete the game on this difficulty but beware since it is extremely difficult. I have a friend who can complete and platinum games on the hardest settings, and he couldn’t even complete this game. The best thing about this new version is that if Apocalypse proves to be too hard you can change the difficulty setting at any time during gameplay without penalty.

The game has choice-based dialog much like you see in visual novels, which adds a lot to replayability. If you start a new game and select different dialogue options, the game will take a different path based on that. So basically, the outcome of the game is affected by the choices you make!

At the start of a new game, you find yourself in a classroom, and your friend Daichi encourages you to download a new mobile phone app called Nicaea. According to the rumors the app uploads videos of your friends dying in real time, so out of curiosity you download the app and within minutes you are shown a video of you and your friends dying a horrible death. You quickly realise that the videos show what is about to happen a few minute beforehand, which means you must act fast. Can you survive what is about to happen?

After the video events that you and your friends survive, disaster strikes Japan, causing demons to appear through the cracks, and now your job is to explore the chaos and find out exactly what happened as you fight your way through the demon-infested country. 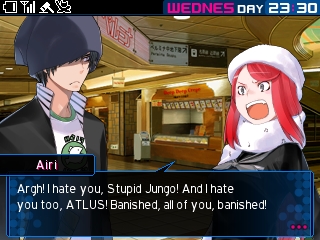 The game features fully voiced cutscenes, each giving you options of which city to visit first. Again this is where replayability comes into play as there are plenty of avenues to take and you won’t be able to explore everything on your first run, so make notes of the cities you have visited and the dialogue choices you make so that you can choose different options for the next run if you want to explore everything the game has to offer. The choices you make will provide you with opportunities to recruit new party members, save lives, and sometimes you will lose allies too, but for these events you are given plenty of warning beforehand so you can plan ahead and save them if you can.

Your party consists of up to four teams with one human leader in each team and up to two demons per team to help in battles. Each team can move freely on the grid based map and clear out the enemies as you go, with two turns each before the battle automatically ends regardless of the outcome, so this is a great opportunity to heal up before finishing off the enemy, a feature I liked a lot! 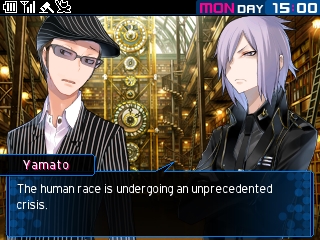 Every battle has win or defeat conditions, and they are not difficult to achieve. Sometimes you will have more than one condition to meet, and if you fail the battle or fail the conditions you can retry, but you get to keep any XP, and macca (in game currency) earned during the battles you fail, including any levels you have gained… how awesome is that? On that note, it is highly recommended that you save your game before every battle.

Events in the game are cutscenes that consume 30 minutes of the day, and they take place in various cities across Japan. Some events can lead to new locations or party members, so explore them as they become available. Some are only available for a limited time, forcing you to choose which event to view, so choose wisely! Any events that are marked with a Pink exclamation mark indicate a battle. 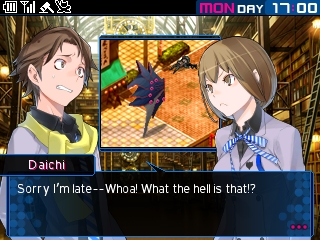 One of my favourite features in the game is the Demon Auction where you have the opportunity to bid for the best and strongest demons there are to fight along side you. If you lose the bid, then that demon is gone forever! But don’t if you don’t like losing a bid since you can always outright buy without bidding! This is the easiest and safest way to snag the demon you want, but it’s more expensive. There are some pretty cool demons with some amazing skill sets, so search everywhere!

Another cool feature is the Demon Fusion app that allows you to fuse two demons you currently have to create a better demon with a new skill set and you also get to keep the skills of the previous demons. There is a lot of fun to be had with demon fusion, and I’m sure you’ll love it! 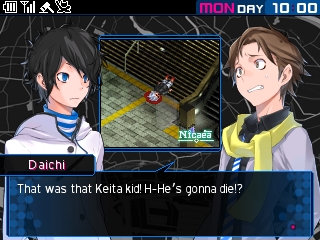 Another great feature is the Fate Viewer that allows you to monitor how close you are to other members of your party. It is very similar to the Persona series, so if you have previously played Persona 3, 4 or Golden, you will understand what I am talking about. There are six ranks, so there’s a lot of fun to be had.

There is also lots of fun to be had with the free battle mode. If you want an overpowered team or to save up macca for demon auctions you can absolutely do all of this in the free battle mode. It is also the best mode to do skill cracks, which is kind of like stealing skills from enemies you defeat. For example, on a grid you choose an enemy you want to pick off, look at their skill sets and select the one you want to crack. If you successfully defeat that demon, the kill has been cracked and is yours for the taking!

Shin Megami Tensei: Devil Survivor 2 Record Breaker will take you around 60-90 hours to complete, and that’s including the new campaign. For true completionists, it’ll probably take a lot longer since around 3-4 playthroughs are needed to see everything the game has to offer.

I had an absolute blast playing this game all week. I have had an all-nighter or two since it’s very addictive! I definitely recommend purchasing the game. It’s great, and the new features are amazing. All the changes and extra content makes this feel like a new game and not a port or re-release. 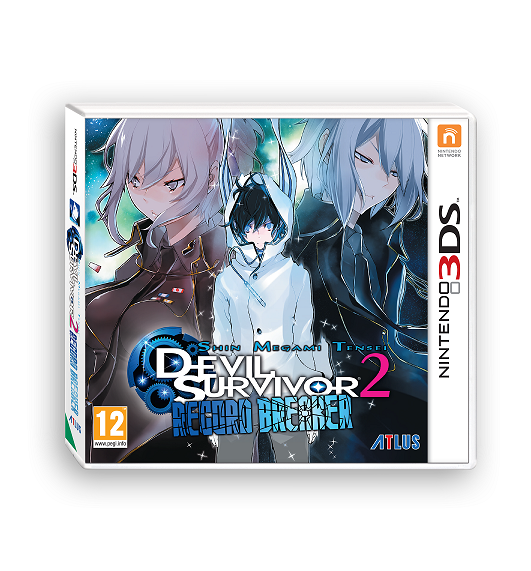 
This review is based on an European 3DS eshop code for Shin Megami Tensei: Devil Survivor 2 Record Breaker provided by NIS America.

New Feature Added To The Site – Beyond PlayStation

Localization Project For Trails in the Sky: Second Chapter Almost Got Cancelled