The Last Place You Look is the third episode for Minecraft: Story Mode, an interactive story set in the Minecraft universe created by Telltale Games and Mojang. This episode continues the adventures of Jesse and his/her friends on their way to save the world from chaos.

Once again, Telltale Games released this new episode only a few weeks after the previous one, instead of the releases being a few months. That’s great since faster Telltale Games episodic releases is definitely a good thing!

As has been the case with other reviews for releases from Telltale Games this contains some spoilers about the story. Are you ready?

Episode three of a five-part episodic game series set in the world of Minecraft.

The Last Place You Look starts right at the end of the previous episode, and is very action packed just a few moments into the adventure, which is great! Soon after that, the party finds itself in the most hostile territory in the Minecraft universe -The End (this is full of Endermen, which are dangerous creatures that can be avoided if you don’t look at them in the eyes). As you can guess, things aren’t looking so good, and the party realizes that everyone must be extra careful out there.

As the episode progresses, the party comes across several obstacles and eventually reaches the fifth member of The Order of the Stone, a person who might have a solution to defeat the enemy threatening the world. How will it go? You’ll have to play the episode to find out! 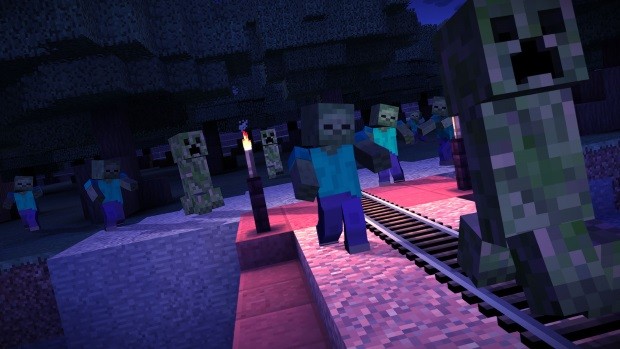 A few days ago, I reviewed the last episode of Telltale’s Game of Throne game, and mentioned how bad the performance was on PS3. Just to make things clear, Minecraft: Story Mode on the Playstation 3 is running very smoothly and has almost no slowdown. I don’t know why those two games are so different from one another performance-wise, but thankfully, this game is a blast on the Playstation 3 system. I highly recommend this game to every Minecraft fan out there!