Arcana Heart 3: LOVE MAX!!!!! is a neat game that features an all female cast with crazy and unique abilities. One of the things that Arc System Works does so well is finding ways for fighters to be very unique and different and not clones of characters you have seen in other games.

There is a huge variety of women available to play, no men on the roster. The characters look crazy going from nuns, warriors, a little girl who has a 2-D monster she drew from chalk fighting with her, a girl who is fighting in a large drop of liquid. When I said crazy character design, I meant it.

The game didn’t really have a training mode, but if you have played other fighting games then you should pick up the systems quickly. Also, and to add another layer of strategy into the game, you can pick an Arcana before battle thus giving each character new depth in how they play and allowing for great customization. 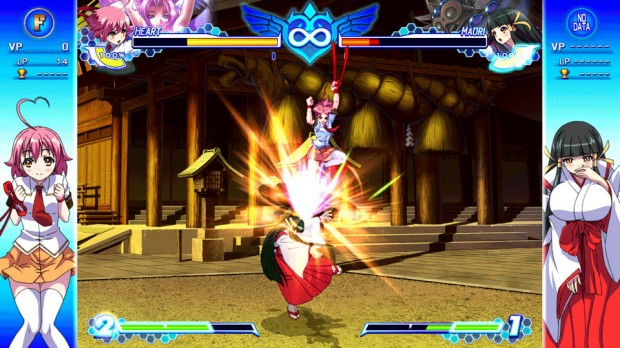 As someone who enjoys the fighting genre I had a great time with it. The only thing that I would have changed was having the battles in widescreen vs the 4:3 ratio they were in. At least they found something good to do in that space!

Are you going to check this title out? Be ready to get you butt whooped at first!