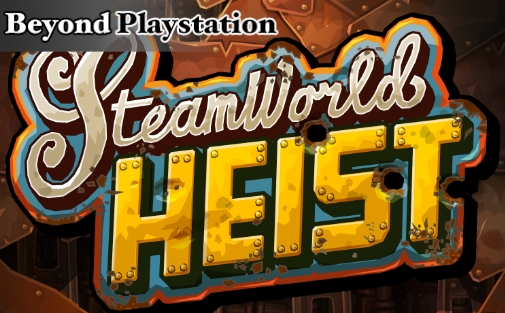 Did you enjoy SteamWorld Dig? Well, then you are going to love SteamWorld Heist even more! The game is a turn-based release with RPG elements, and it is highly addictive. Once I started playing, I was hooked, and the game just wouldn’t let me go. SteamWorld Heist is more of a spiritual successor to SteamWorld Dig rather than a full blown sequel since it has the same general theme and is set in the same SteamWorld universe.

SteamWorld Heist has several great characters and lots of humor to keep you entertained for hours. You play as Captain Piper Faraday, who commands a small team of ragtag robots that go off and explore space to kill scrappers and collect loot. Along the way, you will earn stars on each level depending on your performance, gain experience and level up to unlock new abilities and unlock new robots to fight alongside you! There are also boss levels to deal with, and different difficulty settings for challenge-thirsty fans. 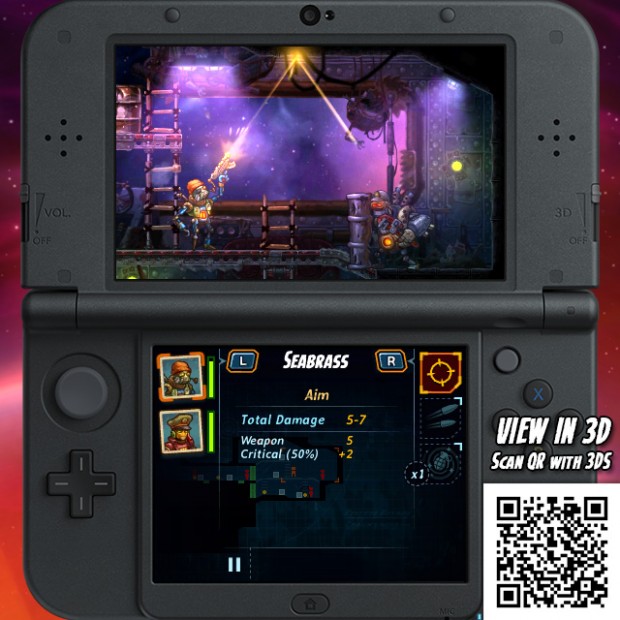 At the start of each level, your ship connects to the enemy ship, allowing you to board and get ready for some scrapper action. But first you can customize your character’s inventory slots. Early on you just have basic weapons and some fun hats but, eventually, you will be able to pick from a vast variety of weapons, and you can fill the spare slots with armor, repair kits or other useful items. On top of that, you can choose any difficulty you wish without penalty!

Each level presents you with two or more objectives, and completing each one earns you a star or two, and getting all the loot, and the epic loot earns you another one. If you’re not careful and are defeated by the bandits, you lose any XP accumulated during the heists and also must pay for repairs. 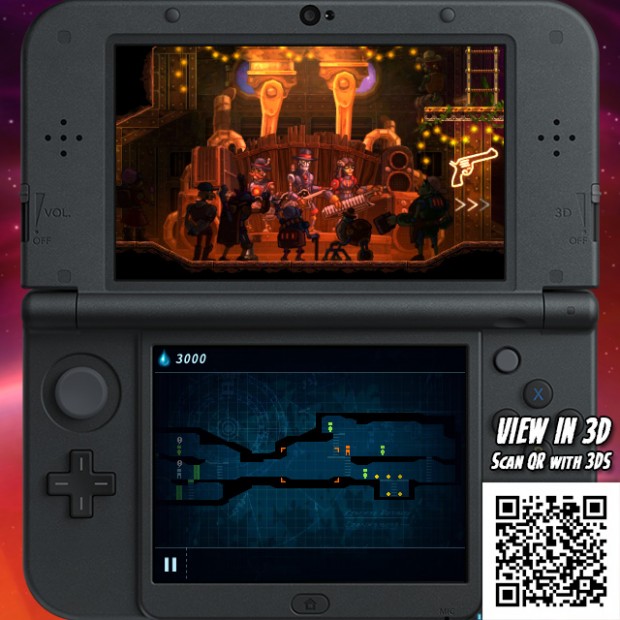 The game has a lot of cool equipable weapons, from Pistols to awesome rocket launchers. You can also sell weapons you no longer want. There are space stations throughout the game where you can purchase new weapons or unlock new characters for stars or money, but I don’t recommend you buy any weapons as you will get most of them through natural gameplay by looting each level – most epic crates will provide you with a new and great weapon to play with!

The combat in SteamWorld Heist is very fun, and it is mostly of the “long range combat with guns” variety, but on occasion you may find yourself a bit too close to a scrapper that you gotta punch him. The weapons have a ricochet effect, so if you hit the ceiling or the floor you may end up hitting your target by accident… or just as planned! Some weapons have an aiming system where you can see where your shots are going, and if you cannot see your enemy, with a bit of luck you can use the ricochet effect to hit a far, far away target. 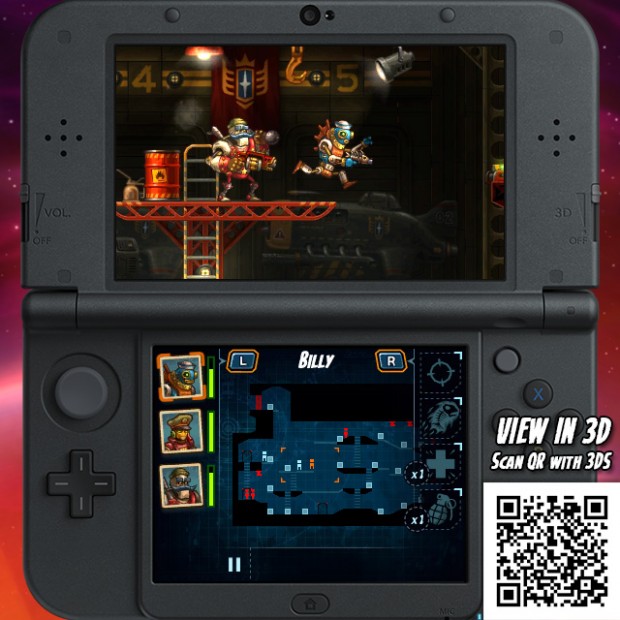 As for the turn-based side of things, I know not very many like the idea of this type of combat, but I’m here to tell you that the system works in SteamWorld Heist’s favor. It is pretty fair since you can move a good number of steps until the line turns blue and you can’t make any more moves. In your turn, you can move, shoot or use an item to heal up o damage your opponents, and if you have some move left you can walk a little further or you can hide behind a barrel or barrier and take cover. The levels have lots of hiding spots that can protect you from being shot at by the enemy, so be sure to use them as needed!

The Boss encounters are quite tricky and tend to take a lot of hits, so always make sure you equip yourself and your team properly with the best stuff you have, because every move you make and every shot you aim will need to be the best choice you make, or you might find yourself ready for the recycling bin! 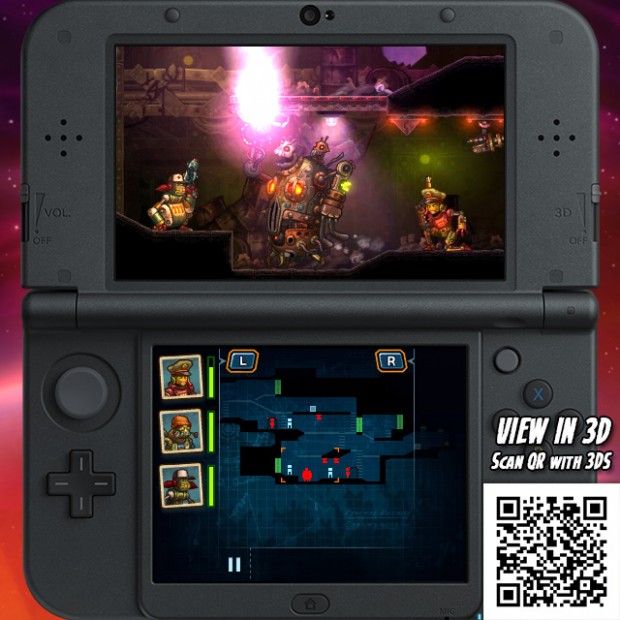 There are five difficulty settings for SteamWorld Heist. The first two won’t give you any bonus XP, but the remaining three difficulties will give an extra 10-50% XP depending on how bold you are. The higher difficulty settings will definitely test your might, so I suggest you wait a bit and start on the medium difficulty to get a feel for the game before going all in at the crazy-hard Elite setting.

The presentation for SteamWorld Heist resembles that of SteamWorld Dig, making this new game a beautiful and quirky steampunk release, with graphics that are just as awesome if not better than SteamWorld Dig, To me Heist seems to be a bit sharper than the previous game. The humor and the story are pretty funny. Overall it is an extremely addictive and very enjoyable game. 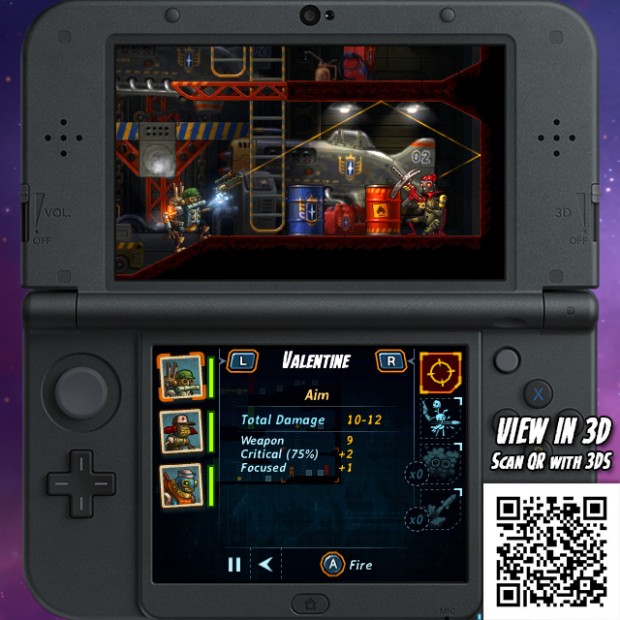 The length of the game is roughly 15-18 hours or so. So far I have well over 12 hours into the game and I am not quite done yet. Despite the higher price tag when compared to other 3DS eshop releases there is definitely much fun to be had and the campaign is extremely good. I definitely wanted a sequel to SteamWorld Dig, and this would have been the easy choice for Image & Form, but I’m extremely happy that they decided to give us SteamWorld Heist instead. This is a truly amazing title, and you would be mad to pass it up. Go and download it, becuase I promise you will enjoy it as much as I have.

Klaus Out Today On PS4