Baseball Riot is the direct sequel of Tennis in the Face, a physics-based puzzle release. I purchased Tennis in the Face when it was on sale last year, and I had a LOT of fun playing all the levels and getting all its trophies!

In Baseball Riot, 10tons software let go of the Tennis Player, and are now telling the story of Gabe Carpaccio, a retired baseball player who got a “ball to the knee” and is now on his a quest to save his team from the power of Explodz, an evil drink everyone is addicted to.

Take note that this game is Cross-Buy, and that means a single purchase unlocks the PS4 and Vita versions!

Baseball Riot is a fun physics based puzzle game packed with slapstick comedy and mayhem! Take control of retired star batter Gabe Carpaccio as he goes on a crusade to free his former team from the grasp of Explodz Inc.

As mentioned before, Baseball Riot is an indirect sequel to Tennis in the Face, and since I enjoyed it so much, my expectations were high for Baseball Riot! The formula hasn’t changed one bit from the previous game, which in this case is great, because more of the same was exactly what I wanted!

If you don’t know what this is all about, then you will be presented with various one-screen levels where you must hit all the opponents with the few balls you are provided at the beginning of the stage. Balls bounce off the walls and are pretty predictable as to where they are going thanks to the perfect physics engine. Fail to knock all your opponents and you’ll have to redo the stage again. You can aim with the right analog stick, and fire with the x button. Essentially, the gameplay is really easy to get the hang of, but some levels will make you scratch your head as you try to figure out how to make everything click, although each level can be completed in many different ways. 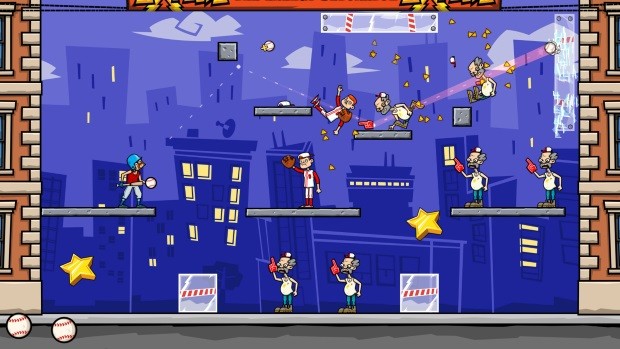 As you progress through the different “worlds” of the game, you’ll notice that different types of enemies will be unlocked You start with a casual baseball fan that can be knocked out by a single ball, but you soon meet with a character that is shielded on the front, or scientists that take more hits to knock down. And if this wasn’t already enough, you can also aim to collect all the stars that are on each level for the maximum score! The trophies are all special achievements that must be done in the different worlds of the game, and they are fun and challenging!

Compared to Tennis in the Face, I noticed that this time the difficulty was a bit higher. For instance, I breezed through the first game in a few hours, but this time I needed to use my brain cells to get through some of the early levels in the game. Not only must you figure out how to knock everyone, but you must also be aware that a little luck is involved as the ball bounces through the different obstacles and then hits a target you didn’t anticipate it could hit. Although this might seem like a con for this game, the feeling of accomplishment that comes with those “I will never be able to do that again” shots are incredible! Trial-and-error is the way to go for most levels, and it feels great. 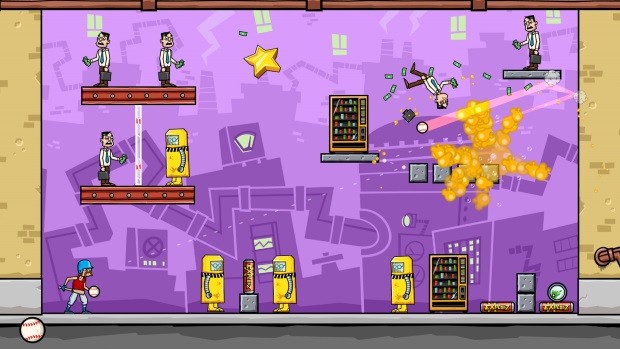 Final Thoughts
I loved playing Baseball Riot, and do hope that 10 tons will continue to deliver other high quality games soon. With Tennis and Baseball down, here’s hoping they go for other sports that give us fun looking characters to bash!

I personally recommended Tennis in the Face to a few friends (some of which purchased it and also liked it!), and I’ll tell those same friends about Baseball Riot. Sure, for many this will seem like only an extension to a game that was released last year but, like I said before, this was exactly what I was expecting for this game, so I’m not complaining! The difficulty might feel a little hard for some, but some extra patience will get you through this.

[review pros=”Cross-Buy: PS4 and Vita
More Tennis in the Face was exactly what I wanted!” cons=”Difficulty ramps up quickly” score=82]


This review is based on a digital copy of Baseball Riot provided by 10tons software.