Are you ready to mix ingredients, participate in arduous battles, and work for a living (what?)? Then get ready to join Escha and Logy as they become new alchemists and learn to work together at their new jobs. This one is an enhanced remake of Atelier Escha & Logy ~Alchemists of the Dusk Sky~, which we reviewed a few years ago, so we’re sure you’re wondering “what did you think of this enhanced re-release?” Well, read below to find out!

Following the success of past Atelier releases on the portable platform, Atelier Escha & Logy Plus is the second standalone installment in developer GUSTâ€™s latest Atelier trilogy: the trilogy of Dusk. Preceded by the bittersweet Atelier Ayesha: The Alchemist of Dusk, Atelier Escha & Logy: Alchemists of the Dusk Sky was released for the PlayStationÂ®3 computer entertainment system in 2014 and is the first of the PS3 Atelier titles to feature a dual-protagonist story structure, in which the player can choose to see the story unfold through the eyes of the romantic alchemist Escha Malier, or the more levelheaded and rational Logix Ficsario.

The Plus version of Atelier Escha & Logy: Alchemists of the Dusk Sky comes bursting with new content, including brand new event scenes inspired by the Escha & Logy anime, which released in Japan in celebration of developer GUSTâ€™s 20th anniversary. These new scenes delve deeper into the relationship that Escha and Logy share, revealing a sweet secret story that was not available in previous versions of the game.

Atelier Escha & Logy Plus ~Alchemists of the Dusk Sky~ – Trailer

This is a double review for Atelier Escha & Logy Plus ~Alchemists of the Dusk Sky~ by the_nmac and Ceidz. This review presents what they both had to say.

I have something to admit, this is the first Atelier game that I have ever played. We have been reviewing them for the site for awhile, but I never actually checked them out even after hearing some great things about them. I was definitely glad to get the opportunity to review this one since it is a remake of a PS3 game for the PS Vita with some enhanced scenes and story to make this the definitive edition.

The game throws you in quickly having you choose a protagonist to play the game. You can choose the female Escha or the male Logy and depending on who you choose you get to enjoy a different narrative of the story, thus giving you some replay value so that you can see the story from the other side later – you can also choose what outfit you want them wearing as well. When the game begins, Escha and Logy are just meeting for the first time since they will be working together. As the game progresses, the two start to get closer and build on their relationship. The character development is really good between the two as the game progresses!

The game has a huge introductory sequence, giving you the layout of the things, the people you will interact with, giving you an intro to the town and your work, and finally how to synthesize items (which is a very important part of the game). It honestly took almost too long, and I could see people jumping out early. It would have been great if they had put a little more action or battles peppered throughout the intro to keep your attention.

Once I started playing the first thing I noticed was how good it looked and ran on the Vita. The game does a great cell-shaded look, a style I’m always a fan of, and it looks great. While running around the towns and fighting in battles there was no sign of any slowdown, and it felt great to enjoy this RPG on the go.

One of the things I liked about the game was it keeping me to task. You have to complete assignments and make use of time properly, which is very different from most RPGs that just let you spend your time doing nothing. Every minute is focused on completing your main assignments and any extra side assignments you can complete in order to unlock more stuff in the game, whether that be ingredients, weapons or money. It’s a neat system that keeps you busy while helping you progress further into the game. 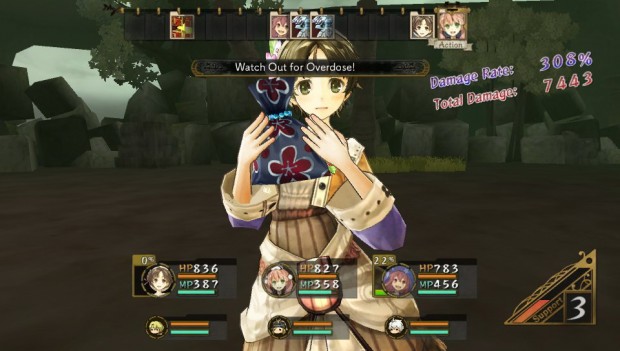 I’ll start off by saying that I actually got pretty far in the original PS3 release of Atelier Escha & Logy that released back in 2014. In that sense, my review will compare the previous release to this one, which is, at first, glance, totally identical. My only nitpick was that the text was quite small on the Vita, but I eventually got used to it.

Also, it’s worth to mention that Atelier Escha & Logy might seem a bit slow to start, but after about an hour, you’ll already be collecting materials and fighting monsters in the huge world. Finding materials is very important since, at his core, the Atelier series is completely built around the synthesis concept.

Since synthesis is at the center of your expeditions and your quests in Atelier Escha & Logy (practically everything you’ll have in the game will come from synthesis), it’s worth mentioning that it is very easy to achieve: once you have found a “recipe” (which are available from NPCs, or unlocked from story progression), you can create a new item by combining the necessary item types. There are a ton of different item types and using higher quality materials will render an item with better and more unique characteristics. Escha does alchemy with a cauldron (like in previous Atelier games), but Logy brings in a new kind of alchemy where he can add attributes and effects into weapons and armor, and that will definitively come in handy in battle. Each time you do alchemy, you are awarded experience points that raise your Alchemy Level, and the higher your Alchemy level the more things you can create.

As you are out in the world, you’ll encounter monsters, and you’ll have to fight them for items, experience and more (it’s a JRPG after all!). The battle system is actually pretty easy for an RPG, and the battle system has a lot of personality and does its own thing. Each character can either attack or use an item per round. It’s pretty standard so far, but there is a “support meter” in the lower right corner that changes the gameplay dynamics. As this meter fills up, you can use “support attacks”, which allow you to hit twice during each turn, or use another character to defend someone who is getting hit. This is a good thing because the defending character will always get less damage than when he/she is not being protected. The battles are fun to play out, but having recently played with fast-paced battle systems like the one in Trails of Cold Steel or Tales of Zestiria, I thought that this one was more slow-paced. 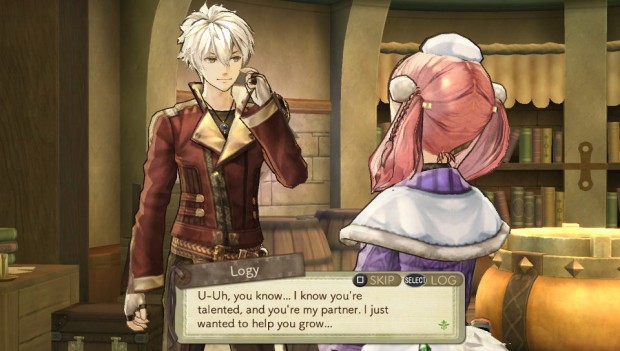 Final Thoughts
We liked playing through Atelier Escha & Logy Plus ~Alchemists of the Dusk Sky~, and recommend it to Vita players looking for a good JRPG. Like we mentioned, the Atelier series main focus is alchemy, and if you like games that ask you to create a ton of items for your quest, then you’re in for a treat!

As an added bonus, the original Japanese voice overs are available for free as DLC on the PlayStation Store, so if you’re a JRPG enthusiast, there is definitely a lot to like in this game.

[review pros=”Great use of the alchemy within the game.
Availability of the original Japanese voice-overs (as free DLC)
Lots of content.
Great look.” cons=”Starts a bit slow” score=83]


This review is based on copies of Atelier Escha & Logy Plus ~Alchemists of the Dusk Sky~ provided by KOEI TECMO America.