When I was offered the opportunity to review Etrian Odyssey 2 Untold: The Fafnir Knight I was pretty ecstatic and ready to take on the game for many hours. I hope you enjoy the review as much as I have enjoyed playing the game!

Etrian Odyssey 2 Untold: The Fafnir Knight is a remake of the original Etrian Odyssey 2 which was released about ten years ago on the Nintendo DS. I actually bought and played the game on release day and completed it back in the day – I have played the first four Etrian Odyssey games, and I currently have Mystery Dungeon sitting on my shelf just begging to be played, but alas I haven’t had the time to dive into that one! The best thing about the Etrian Odyssey series is that, for me, they provide me with many hours of pure relaxing fun. The series has a neat mechanic – cartography. This means that you get to draw maps, and it is one of the reasons I love Etrian Odyssey so much… an RPG that is centered around cartography, how weird is that? The game is also very story driven and revolves around the main characters in the game which I will discuss in a little while. Let’s start with the introduction of the game.

Etrian Odyssey 2 Untold: The Fafnir Knight was created to bring the series to a new audience, and hopefully we will see a new generation of lifelong fans pledge allegiance to the EO series thanks to the Untold releases. The game has been available in the United States for a good few months now. The European release is a few days away, so not a long wait left for our Euro readers!

The game is a sequel to Etrian Odyssey Untold: The Millennium Girl, a game sitting on my shelf next to Mystery Dungeon! Again it’ll have to wait until I have some free time away from reviews to dive into taht one! The story of The Fafnir Knight starts in the High Lagaard’s Library where you get to meet the protagonist (you get to name him/her). The protagonist was raised at the library alongside best friend, Flavio. You and Flavio are part of the new Midgaard Investigation Team, and the Grand Duchy of Caledonia has made you the team leader. Your first mission is to meet Princess Arianna and explore and map the Yggdrasil Labyrinth, collecting a wooden token as proof of your work. The Duchy has explained that there has been an issue with plagiarized maps, and he wants evidence that the map you create is your own work. During your journey you will meet new members of your party, starting with Arianna. As a team, you will explore and map various locations and solve puzzles and play out story events. You will also discover mysteries that connect to the locations you visit and fight all enemies that stand in your way. As your adventure unfolds, you will develop bonds with your party, strengthening your connection with them.

On the bottom of your 3DS screen is an empty map that you received from the Duchy of Caledonia, and you have a multitude of tools on the right side of the grid for all your map drawing needs, you have various icons you can place, a pencil to draw map outlines, and a paintbrush to paint squares in the colours of your choice. You have complete and total freedom to design maps just the way you want them. I know it sounds like a boring kind of game, but once you get into it, you’ll find it’s actually a lot more fun than you think. It is much more involved than just mapping dungeon floors. If you are not confident in your cartography skills, you can choose to auto-map in the settings menu, but doing that kind of ruins the purpose of the game, and takes away all the fun. I suggest giving it a go on your own. You can use the maps you have drawn to solve a puzzle and use it to find your way back to the exit, making it a pretty rewarding system.

One of the biggest trademarks of the series is the FOE’s that serve as the ultimate bosses in the game. They are visible and extremely deadly, capable of one-shooting your entire party. You need to be properly leveled up and have a pretty decent kit with good skills to even have a chance of taking them on. The movements of FOE’s are turn-based, so when you make a move they make theirs too – this makes it easier to predict their actions so that you can avoid an encounter if you chose to.

FOE’s are not the only enemy you have to worry about. While roaming maps, you will have random encounter battles. The important thing to remember is to heal up after each random encounter, because on Normal difficulty you only get one chance to retry a battle and on Expert difficulty you get no extra chances. So always plan ahead, because you never know when the next random encounter will occur. Also, when you’re in town make sure you are properly stocked with healing items. The random encounters will get tougher as you progress!

Along with exploring and completing story missions you have access to side quests that you can take on at your leisure. You can accept side quests from Cass, the barkeep in the town. The quests are quite varied, and there is definitely one to suit every taste. Sure, a lot of them are fetch quests, but they will earn you money which you will need in order to better equip your party for tougher battles.

The game features skill trees – each character has quite an extensive tree that you can upgrade and adding 10 points to one skill maxes out that skill. Each character has approximately 25 skills, so that is quite a lot to level up and max out. Some skills won’t unlock until you reach a minimum level. Each time you level up you are given X number of skill points to put into your skill trees. If you wish you can reset your skill points if you think you have made an error at the guild, but bear in mind this will cost you two levels, so I wouldn’t recommend you use it since you need the levels to beat FOEs. Be careful about where you choose to place your skill points!

As I said before, the game features turn-based combat, and you have a set of options during combat. You can use basic weapons or skills to defeat your enemies, and when you have made your party’s battle choices the game will offer you one chance to change your mind and if you are happy with your choices you can press the A button to execute them. Your turn will then automatically end and you enemies will take their turn, and that is how the battle system works.

The best available class in the game is the Fafnir Knight and as that class, you have the ability to transform and do ridiculous amounts of damage. The character you play in story mode is a Fafnir Knight by default, and if you want to play the game on Expert difficulty, you will want a powerful Fafnir Knight class for the best possible chance of beating the game. The only problem with that is the class is exclusive to story mode.

There are three difficulty settings to choose from the easiest being Picnic Mode, which will allow you to enjoy the story without any difficulties, but you cannot earn any medals. You can also play on the Standard and Expert difficulties, but the challenge increases with each difficulty you choose. For the purpose of the review, I played on Standard difficulty which provided me with a good challenge without being too frustrating.

There is a lot more to the game than what I have stated above, but I don’t want to spoil things. There is about 50-60 hours of gameplay time in there, and if you wish you can speed run your way through the game with minimal story in classic mode. In this mode, all classes are available – except for the Fafnir Knight – and you can build your party from scratch and pick the classes you want for your characters. Classic mode plays more like the original game with less story and more emphasis on exploration and map drawing. The only drawback to this mode is the Ginnungagap is not available in this mode – you can, however, acquire the location via a quest.

I hope you have enjoyed reading this review as much as I have enjoyed playing the game. It truly is a masterpiece I highly recommend purchasing. The amount of fun you’ll have with all the content available it is well worth the full asking price. Etrian Odyssey is one of the best dungeon crawlers out there, and Etrian Odyssey 2 Untold: The Fafnir Knight is an excellent option for 3DS and New 3DS owners.

Disclaimer
This review is based on a 3DS EU copy of Etrian Odyssey 2 Untold: The Fafnir Knight provided by NIS America.

First Episode For The Walking Dead: Michonne Available On February 23 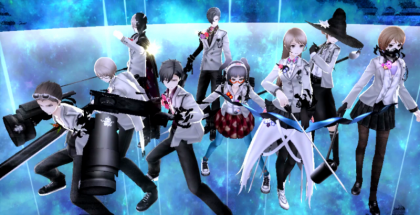