[Beyond PlayStation] Legend of Legacy

The story begins on an island called Avalon – a newly discovered region with a plethora of secrets to find. The main object of interest is the Star Graal, which is what your party is looking for, as it is said to be holy and extremely valuable. Legend of Legacy is kind of an open-ended RPG where you’ll do a lot of exploring as you fight your way to the end. It is a wonderful game, and I had a blast playing it for this review!

As the game starts, you can choose one of seven unique characters to play, each with a unique story and personality as well as strengths and weaknesses, and this is where the replayability into play since each character also has specific cutscenes. I’m not going to spoil it for you by going into too much detail but it definitely is worth replaying because of all the stories you can experience. 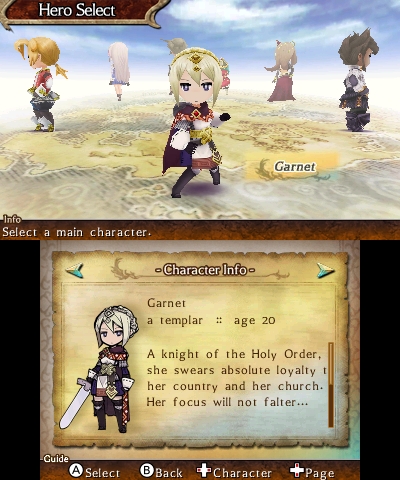 The characters you can choose are:

Meurs who is a 27-year-old Elementalist. he is the last of his kind that can speak to the elementals, traveling the earth with spirits as his guide.

Bianca is a girl with amnesia. She awake to find her memories have vanished, and yet she maintains her optimism.

Liber is an 18-year-old Treasure Hunter, always in search of treasure – he is spirited and idealistic. His integrity and chivalry often land him in trouble.

Garnet is a 20-year-old Templar, a knight of the holy order. She swears absolute loyalty to her country and her church. Her focus will not falter.

Owen is a 36-year-old mercenary who is known by his nickname ‘The Baron’ – his prowess in combat is legendary. There is no job he will refuse as long as the price is right.

Elouise is a 24-year-old Alchemist; a seductive young lady who eagerly researches the secret of eternal youth, perhaps her kind nature is just an act.

Flimia is a frog prince, heir to a lost Kingdom that is no longer found in Avalon. He remains well-mannered and often bursts into song.

When you have chosen a character to play as you will automatically be given two other party members – who you get to join depends on the character you choose. As you progress a little bit in the game, you can recruit other party members and swap them around at the party menu at the Inn to bring more variety to your adventure.

The main objective of the game is to explore and complete maps as you engage in combat to level up and learn new skills. When you have completed maps to 100%, you can sell them in shops for a handsome sum. Maps will have multiple exits, and you must fill out those sections as well in order to fetch the highest price, so make sure you concentrate your efforts on the edges so you can’t miss the exits! 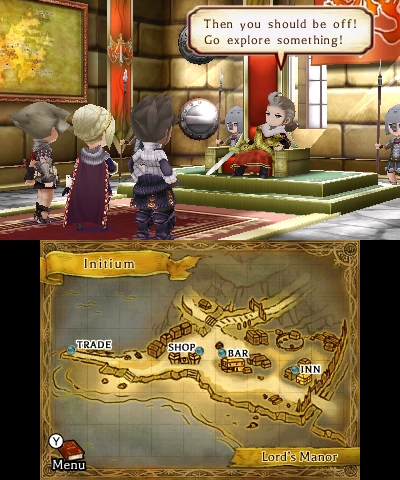 In between combat and exploration you can exit maps and return to the safe town of Intium where you can find an Inn to rest, save and swap your party characters. There is a bar as well, and you can sometimes recruit party members there, but most importantly are the shops where you can sell your stuff and buy better weapons and armor, and you can also find uncharted maps for sale!

As is the case for the Etrian Odyssey series, the bottom screen is your map but, unlike the interactive mapping mechanic that Etrian Odyssey has, the map autofill as you explore each area including anything you find, be it trees, monuments, debris, etc. When you obtain new uncharted maps, they will appear on the overworld map marked with a blue dot and the name of the location beside it. The overworld map is not as fancy as you would normally see in most JRPGs, but it does its job. 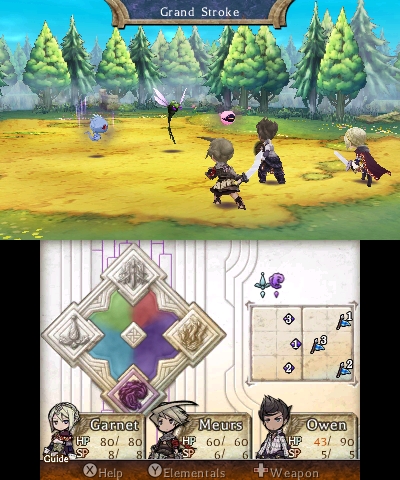 Legend of Legacy has no random encounters – all enemies are clearly visible, and they look like black shadows. You can choose to confront them or run away, but if the shadowy enemies turn red before you confront them, they will gain advantage in battle by taking the first turn. When combat is first initiated, the system is based on formations that work similar to preset orders given to each character. For example, in the topaz formation, you have a character attacking, a second character defending all three characters from attacks by absorbing the hits, and lastly a support character who can heal or attack – you can of course create your own formations. You can save up to a maximum of six different formations, and in a single formation, you can choose a stance offering three roles: attacking, guarding and support. You can change a character’s preset stance by scrolling through the choices with the D-pad, and the choice of stances available will increase as you learn new skills. 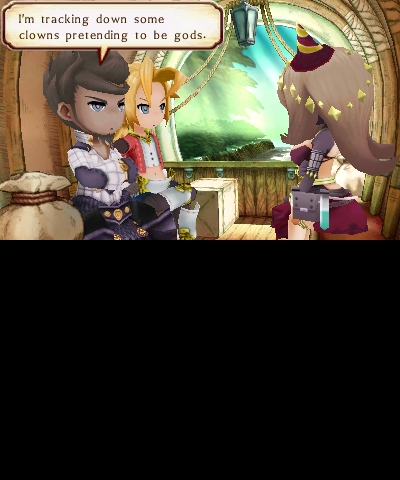 Along with formations are elemental contracts. You can form contracts with Air, Water, Fire and Darkness elements, and without these contracts, you cannot cast spells. So, for example, forming a contract with the Water element means you can heal a little bit after each turn. Do take the time to experiment with the elements to find the right one for you… they are so fun!

Saving your game is incredibly important as I have discovered the hard way. Each time your character dies in battle, he/she will lose a chunk of their total HP once revived, so when you finally win battles always go back to the Inn and sleep to recover your full HP and SAVE your game before you head a back out. It is a pain having to do that, and I think it would have been far easier to scatter save points around various locations, but it is what it is. 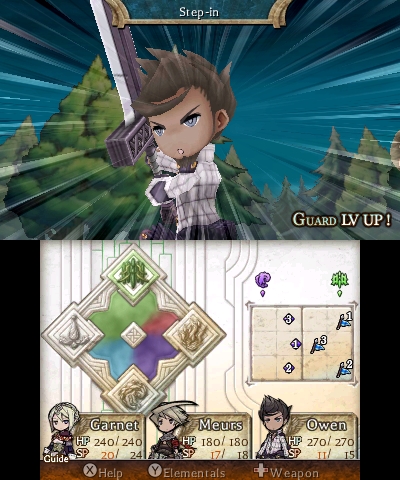 Legend of Legacy is fantastic. I’ve already eighteen hours with the game and, other than the save thing, the game is a blast. I love to explore new regions as I complete each map, and this game has plenty of that. I would definitely recommend purchasing Legend Of Legacy right away.

Disclaimer
This review is based on a 3DS EU copy of Legend of Legacy provided by NIS America.