SwapQuest is a new indie puzzle game on PlayStation Vita that offers you the chance to go out on a quest through the Kingdom as either Prince Wilbert or Prince Wilma who are searching for Aventuril, a holy sword needed to save the kingdom from the horde of monsters who are destroying the land. Is swaping around tiles on the screen to create a path for our heroes as you collect treasures and level up as fun as you think it is? Well, read below to find out!

In SwapQuest, you play as Prince Wilbert or Princess Wilma to find the holy sword Aventuril in order to defend the kingdom from the evil Horde that has invaded the land. You have to swap the tiles to build a road for the prince/princess. Collect gems, fight monsters, buy or find equipment, avoid traps, but above all don’t get caught by the horde at the bottom of the screen. The game features an epic journey through over a dozen different areas, each with their own unique enemies, special tiles and graphics. A branching path through the game world, two playable characters each with their own strengths, and a customizable character development allow for multiple playthroughs.

This is a double review for SwapQuest by EdEN and Ceidz. This review presents what they both had to say.

SwapQuest begins by telling its story, in which an evil demon that was trapped in a crystal has managed to escape. The demon began to destroy the land, but then two children came in and got the resolve to collect the crystal shards that will eventually be used to send the demon back to its glass prison.

The gameplay of this game is very interesting. Each level is composed of randomly positioned tiles that must be moved to create a path that your hero can cross. It’s quite easy in practice, but since the levels slowly auto-advance, it does get a bit stressful when you’re looking for a specific tile to reach a destination! Each level has a few monsters and a few treasures in it. Defeating monsters nets you experience points that allow you to level up (hence the RPG elements of this title), and collecting treasures gives you jewels that allow you to buy better equipment or improve your skills.

My highlight for this title is definitively the creative bosses that are scattered around the world. Each one of them requires a little thought before understanding how to damaeg them, and is an awesome touch to this good game!

I liked playing through the levels of SwapQuest, but thought that the gameplay got a little redundant by the end of the game. But the variety in classes for the main character means that you can play differently once you start a new quest, using new skills or working around the limitations of each class as you try to save the Kingdom! 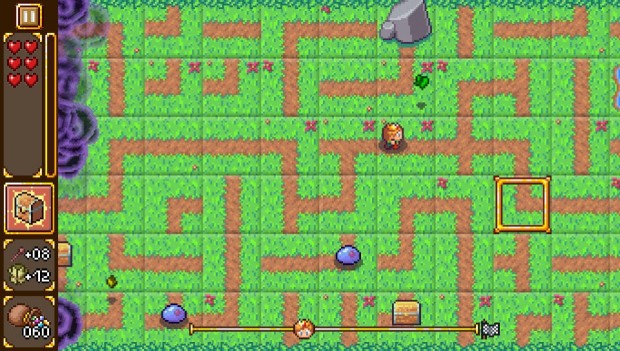 SwapQuest is a game I was very much looking forward to playing for review after I got a chance to interview Costantin Graf to learn more about the game. As Ceidz has said, you are required to swap around tiles on the Vita screen (this can be done either by using the touschsreen or the D-pad and analog stick and the face buttons) to create a path for your selected hero to make it to the end of a level, or to find a way to damage one of the game’s bosses.

To complement what Ceidz has said, I’d like to talk about something he hasn’t mentioned. SwapQuest has a Caravan (available as a button on the map at the bottom right of the Vita screen) that offers players the chance to secure some of their hard earned gems (because you can only carry 999 gems at a time, so unless you save some of them you won’t have room in your pockets to collect some extra gems), purchase new weapons to increase their attack power (or to grab a weapon with a special status bonus attack), improve the skills they have unlocked for his character’s class, or add status resistance to their armor. This adds an extra customization layer to the adventure, on top of being able to obtain experience points from the enemies you defeat in order to improve your stats and switch classes (twice!) during your quest. 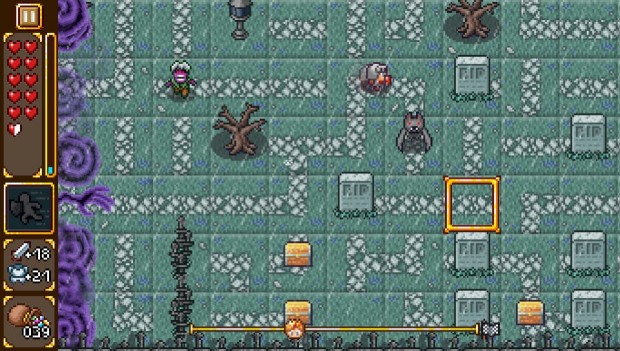 Another thing I wanted to mention is that the game features branching paths (as well as bonus challenge levels), and this means that you won’t be able to play all levels in the game during a single run. The branching paths make it so that you end up reaching different types of levels (deserts with sandstorms, swamp-like areas where you must create bridges with the wood planks that you find, levels where you must use water sources to put out some fire, etc.), giving subsequent replays a new twist if you decide to take a different path here and there as you go as you play with a new character class (but if you want to do your trophy run as a single class, worry not! You’ll get access to a free-roam mode after you’ve defeated the final boss).

Finally, something that surprised me (and which I discussed with Constantin in our interview) is that SwapQuest includes a full trophy count with a Platinum! That’s right, this indie release has several trophies for you earn, and if you put some effort into it you’ll be able to add a shiny Platinum trophy to your collection. 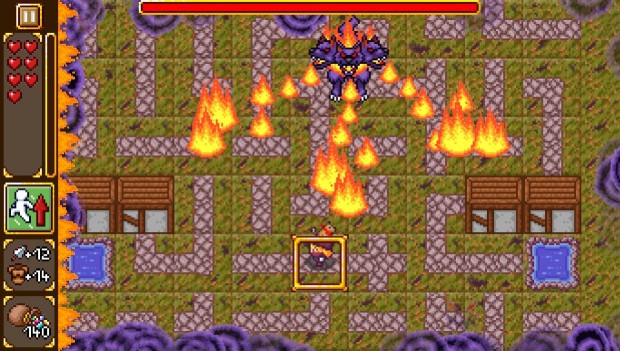 We liked playing through SwapQuest, and its original gameplay setting. We were amazed by the creative boss fights, which are definitively the highlight of this game. The gameplay might feel a bit redundant for some of you in the long run, but this budget-priced release is a game we fully recommend!

[review pros=”Creative boss fights
Branching paths, justifying a second playthrough” cons=”Gameplay might feel a bit redundant for some of you” score=80]


This review is based on copies of SwapQuest provided by Rebusmind.