We’re working on a double review for Don’t Die, Mr. Robot!, so we got in touch with Infinite State Games to talk about the game’s move from the PlayStation Vita to the PS4, as well as to discuss their current project for Sony platforms!

PS3Blog: Welcome! Thanks for joining us today. Could you please each introduce yourself to our readers and give them a bit of info on who you are and what you do?

Yo! We’re Charlie and Mike – we are developers and publishers of independent games. Our company is called Infinite State Games Ltd. Me and Charlie have been making games for years (you may well have played something we’ve worked on in previous incarnations while at other companies!) but ISG is our foray into independent development.

But we don’t take ourselves very seriously, we’re all about the fun, and we hope that translates across into our games 🙂

PS3B: We’re currently working on some reviews for Don’t Die, Mr. Robot! and while the name of the game sorta gives the secret away (there’s a robot, and it mus not die), how would you two describe the game to someone who has heard about it?

Charlie: Well, we call it a bullet hell fruit ’em up. Imagine that Bubble Bobble, Robotron and Every Extend had some kind of sordid late night triste which resulted in a beautiful if eccentric game-baby. OK – admittedly that wouldn’t make sense to most people so how about this… “Don’t Die Mr Robot is the most fun you can possibly have for $3.99”

PS3B: Why did you go for developing a fast-paced arcade-style release in the first place? 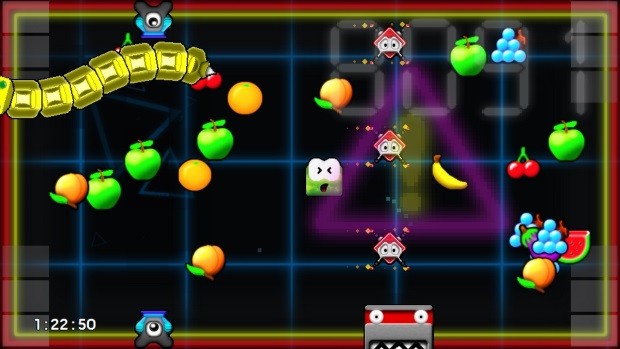 PS3B: The game was previously available on PS Vita and has now made its way to PS4. What has changed for this new version?

Charlie: Well the PS4 version has lovely hi-rez art made especially for it. The art in our game appears minimal to start with, but when you start getting good it’ll soon become clear why we made the choice for high contrast minimalism over detail.

We’ve gone back into the mastering studio and re-engineered our legendary DDMR soundtrack so it sounds awesome on TVs. Music is a big part of the development process at ISG and we take our sub-bass super seriously.

Mike: The extra power of the PS4 also means there’s no framedrops any more when things get completely mental.

Our personal favorite addition however has to be the controller light which bathes your lap in glorious technicolor depending on the ‘zone’ you’ve reached in the game. 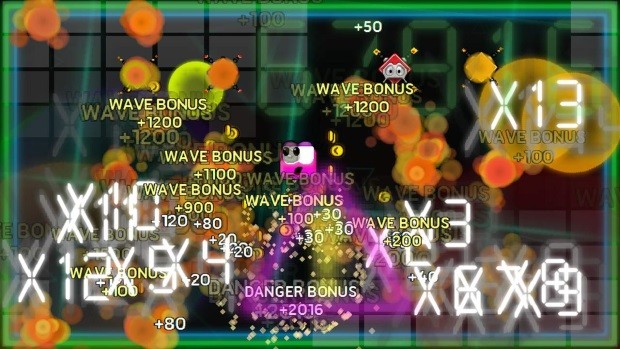 PS3B: Now that the game is out on PS4 and Vita, are you working on a new project? Anything you can share on that?

Mike: Oh, boy! Do we have something interesting lined up for our next game! It’s an aerial combat roguelike. We’re calling it ‘Wing Kings’ at the moment. Imagine an arcade 2D propellor plane combat sim with randomly generated landscapes, missions, and a roguelike character upgrade system. Now with that glorious concept in mind, stick in multiplayer, leaderboards, almost endless replayability, a rip roaring metal soundtrack and …. actually that should be enough to get anyone pumped!

Charlie: Here, let us show you a super early pre-alpha video of our prototype which should give a few clues as to how it’ll play.

PS3B: Thank you for doing this interview. Is there something else either of you want to add before we end this?

Charlie: Yeah! Go and buy Don’t Die, Mr. Robot! It’s cheap as chips, packed full of unique thrills, totally rad music and enough replayability to keep you coming back again and again. We don’t have a massive marketing budget (we don’t have any marketing budget) – we’re entirely relying on word of mouth, so if you’re digging our game please tell your friends!

Mike: What Charlie said! Oh, and thanks for the interview!

PlayStation VR Will Be Out This October!

Worms W.M.D Is Coming To PlayStation 4 This Year