Order Up! is the fifth and last episode in Minecraft: Story Mode…. Oh wait, that isn’t right! This won’t be the last episode because Telltale Games has announced that the series will continue with THREE new episodes in 2016!

Before going any further, I wanted to let you know that I thought that this episode was downright Epic and that I loved every minute of it. I think this might even be the best episode ever released by Telltale Games!

On a tip from Ivor, Jesse and friends head to an abandoned temple holding mysterious treasures. Ambushed by former Ocelot Aiden and his crew, our heroes find themselves in an entirely new world: Sky City! As they explore, the Order finds that resources are at a premium, and nothing but ‘The Void’ exists below the known world. When Aiden convinces Sky City’s ruler that the New Order of the Stone are up to no good, you’ll need to make some tough choices to clear your name, and keep Aiden from destroying an innocent world.

First things first, if you didn’t play with your Playstation 3 recently, you’re in for a threat! Before playing, I had to download a PS3 firmware update (which took a while), then a large software update of roughly 450MB for Minecraft: Story Mode, then download the fifth episode which weighs in at around 540MB. All in all, I started playing half an hour after I had sat down in front of my TV.

This fifth episode begins as the crew is on a new adventure in a castle they’ve been told to check out. In it, they’ll discover a mysterious object that will send them on a brand new adventure! I’m not spoiling anything about the story, but let’s just say that I was VERY surprised by the direction it took, and you definitively have to see it for yourselves! 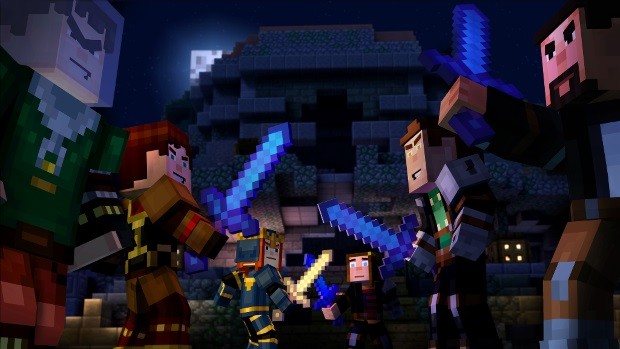 This is, in my opinion, the best episode that ever released from Telltale! It’s literally epic, and reaches its small story arc to completion in the same episode. The ending opens up to the way for the newly announced episodes 6-8.

As a side note, I found a small glitch: I wasn’t able to see My Choices at the end of the episode. They didn’t display after the credits ended, and I went back to My Choices in the main menu, but it still wasn’t available. Oh well, It will probably be fixed by the time I play the next episode!

Out On PS4 – Organic Panic