SENRAN KAGURA ESTIVAL VERSUS, the latest entry in the series, will keep you busy as you fight many shinobi in an all-out hack and slash adventure to show your academy’s dominance. Are you ready to show you have what it takes?

A mystical phenomenon transports the shapely shinobi of the titular series to a parallel dimension to face off against their rivals in a new kind of battle. In this strange-but-sunny island paradise, the girls find themselves face to face with their departed loved ones. Can they bear to part from them a second time?

With over two dozen characters, making this the biggest roster in the series’ history, SENRAN KAGURA ESTIVAL VERSUS boasts more moves, more story, more attitude, and more destruction online with matches that can support up to 10 players (PS4â„¢ system version only ‘PSVita’ system supports up to 4 players). All the previous shinobi girls return with a host of upgraded moves to master, and new playable characters offer more challenges to conquer, along with a story that’s equal parts sexy and shocking, serious and scandalous, busty and bouncy. 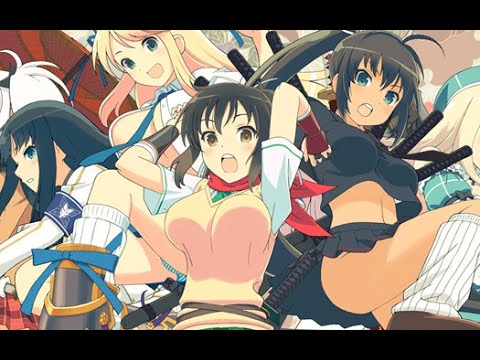 So Senran Kagura Estival Versus is a super interesting game. Being someone who was very unfamiliar with the series history, this was definitely a unique introduction to the series and its characters.

The game is about girls who are also shinobi. They go to different academies, and one day each of the groups is teleported to a parallel dimension where they must take part in a fighting festival. The story to put the characters into conflict was simplistic, but a bit confusing, especially for someone not familiar with the series. You get to spend time with each group of girls before they are transported to the desert paradise, getting a quick brief of what is unique to each one of them. One girl, for instance, is turned on by being talked down to, one uses really nasty language, and one is infatuated with boobs (more on that later), so each girl has something unique that you will remember about them. 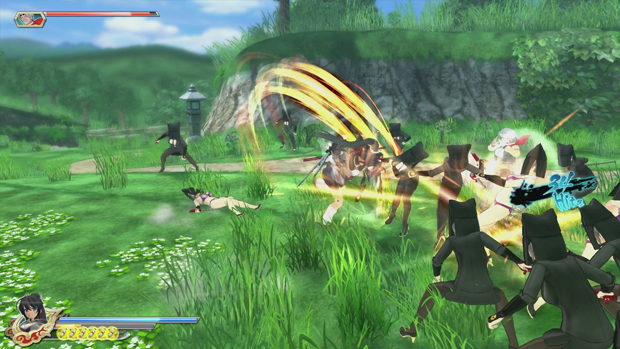 For people not familiar with the series it would have been great to see a “previously on” recap or some sort of refresher option as past history was frequently commented on. Without a knowledge of the series, this did start to get confusing as there are now several games that take place before this one!

The game starts off mixing the initial story with some training on the battle system, giving you a full laydown of the system in small doses. The game, like most hack and slash games, can be played as a button masher. However, most people who learn the battle system will be better at the game due to the extra layer of strategy added to the mix. The game has the type of attacks you’d expect for this style of game, including a weak and a strong attack, and different button presses create different combos. There is also a dash attack to get around the field quicker, which can also be used during Air combos. Once you collect scrolls you can do transformations make your characters a bit stronger with new clothing – the transformations are anime-esque and leave little to the imagination, although there are sparkly bits covering each girl’s private areas. Also, you can boost your attack right up when using frantic mode, where your character rips off their clothing and fights in their underwear. 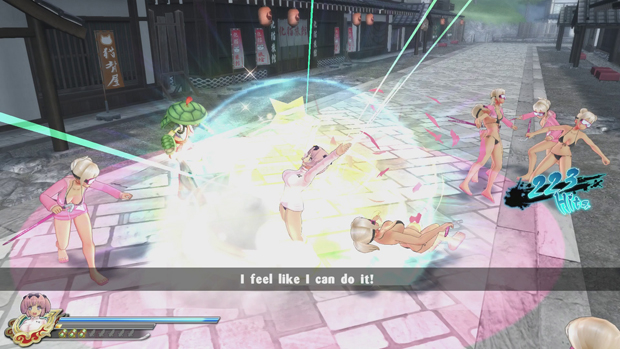 The battles are fast and frantic with tons of enemies on the screen at once – although there are not a ton of types of enemies, you’ll often be fighting 10-20 of the same character models. The Vita does a great job with little slowdown as it keeps up with the action. The biggest issue I had was having to spin the camera with the right stick to see where enemies were still hiding.

Here comes the part of the game that will either pull you in or push you far away from the game This is a fan service packed title featuring lots of breasts and scantily clad woman. As mentioned earlier, the game has very graphic transformation sequences, promoted with the transformation scroll popping up from their breasts. As you fight the hoards of enemies you know you are doing great damage as their clothes fall off, and the same goes for your character. As you take more damage your undergarments will show as well. There is a dressing room mode where you can pick what clothes your character will be wearing down to the lingerie they are packing. You won’t want to play this with your kids or significant others around! 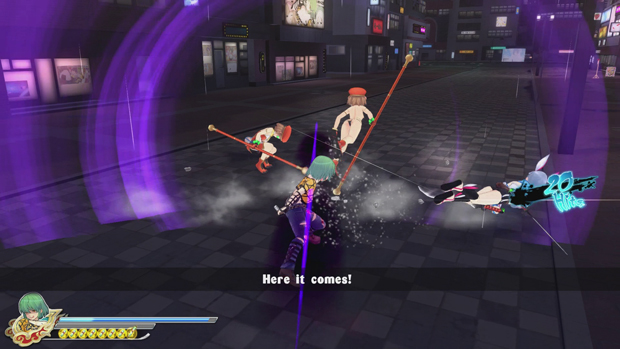 The game has 50 trophies available including a Platinum trophy. None look too difficult as a large part are related to story progress and individual character mission progress.

Overall I liked the game’s combat and hack and slash sensibilities. Figuring out the combos and the battle system was fun and offered a lot of enjoyment. The characters were unique and interesting thanks to their personality quirks, although I would have loved to see a recap from other games to give new players a refresher as they seem to be so interconnected.

You can purchase SENRAN KAGURA ESTIVAL VERSUS from the PSN store

Come Check Out Over 15 Minutes Of Uncharted 4!