I’m someone who plays a lot of video games, as well as a lot of cards games with friends when they come over at home. Maliya’s proposition is to bring a very obscure card game to your handheld. How does this game hold up? Read below to find out!

We need something different than the same card games, Always Solitaire, Blackjack, and Poker…. Arrayansoftâ„¢ brings you a new, fun and intelligent game: Maliyaâ„¢!!! Hidden from the world, the card and strategy game: Maliyaâ„¢ delivers fun for centuries to those who know it, this is the first time that is developed for video game consoles and gives you different options to keep you amused.

First of all, and before even starting my review, I want to mention that as soon as the game was loaded and the main menu came up, I already had doubts about my experience. The menu is bland and is only composed of 6 huge buttons that take you to each of the functions this game has to offer. We are even greeted by a voice saying “Welcome!”, but felt somewhat weird and distant. You can choose the Story Mode, 1 Player vs. CPU, 2 Players or the Gallery, which had a few pictures / painting from the Renaissance era.

Presentation
So, I then started the Story Mode. We get a short cut-scene telling us that the game is about a scientist who got sent back in time (I’m not sure why, and it’s not explained), crashing into a foreign land. Upon arriving in the past, a kid (called Kid) tells him that he must defend himself right away by playing the card game Maliya.

The cut-scenes are static 2D images and in a resolution so low, that we can see compression edges around the characters. Some text is also displayed using WordArt-like fonts, which really felt out of place. There isn’t any 3D in this game, which very honestly is not an issue in itself, but in this case, the graphics look like they were taken directly from an early 2000 CD-ROM. Finally, the English translation (the actual default language of this game), is not accurate and I even found words in the opening tutorial that have been left in the original language. Given the small size of the text in this game, I think help from a professional translator could have helped. 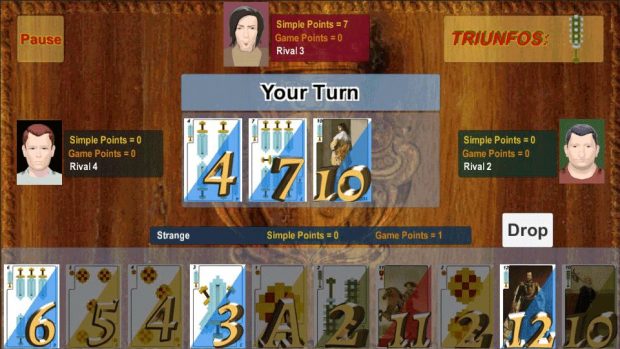 Gameplay
There are four types of cards that can be played: Oros, Copas, Bastos, and Espadas. Essentially your cards must be stronger than the opposing ones (you play against 3 AI), but the first games are REALLY confusing since the cards have many differences: they are color-coded, have different picture types, and have a number on them. The rules are complex to learn, and another thing that I hated is that help isn’t available as you play.

After a few games, I was confused and had to call go back to the main menu and watch the tutorial again. Of course, that meant that my game had to be reset, and I had to go through the opening cutscene again to play. One of the most irritating aspects of this game is that it’s almost completely touch-screen driven (which is actually great), but once each short round is over, we have to press the X button to do the next draw. There isn’t any good reason to have to switch to the physical controls when everything else is done by using the touch screen.

Also, once a level is over, we get a password which must be entered the next play session to continue at the level you have reached. Honestly, the Vita is a very capable handheld and from all the games I’ve played, I’m pretty sure this is the first time a game required me to enter a password instead of saving the game like every other release does.

The music is tolerable at first (classical music) but sounds, once again, like something that has been extracted from an old CD-ROM game. The funniest thing I noticed is that if the match lasts more than 2 minutes, the music doesn’t loop, meaning that you’ll finish your match with a totally silent Vita, which is just plain weird. The sound effects for their part were annoying right after drawing my first set of cards.

Final Thoughts
Maliya didn’t convince us. It’s an underground game that might be the least beautiful game on the Playstation Vita. Trophies are related to completing each of the game’s levels, but given the gameplay, I didn’t get many of them.


This review is based on a digital copy of Maliya provided by Arrayansoft.

Aliens Vs. Pinball Coming This Month! 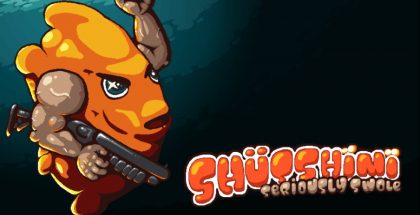