Day of the Tentacle RemasteredFeaturedGame Reviews
No Comments

Day of the Tentacle is a classic game that was released way back in 1993 on discs and CD-ROM. It recently got an HD remaster from Double Fine, in a similar fashion to last year’s Grim Fandango Remastered.

In this point & click game, we follow Bernard, Hoagie and Laverne in their quest to save the world from Purple Tentacle (actual character name) in his frenzy for world domination.

Originally released by LucasArts in 1993, Day of the Tentacle is a cartoon puzzle adventure game in which three unlikely friends work together to prevent an evil mutated tentacle from taking over the world!

Day of the Tentacle Remastered – Trailer

Before going any further, I need to state that I didn’t play the original Day of the Tentacle back when it released over twenty years ago, so the remastered version was the first time I’ve played this game. If, like me, you didn’t know this classic back then, its essentially a point and click adventure game. The gameplay is simple and is very quick to pick up very: you select an object/character with either a button or the touch controls and interact with said object/character using the available actions. Each action leads to some commentary from the playable character, and I found myself testing every choice almost at all times. 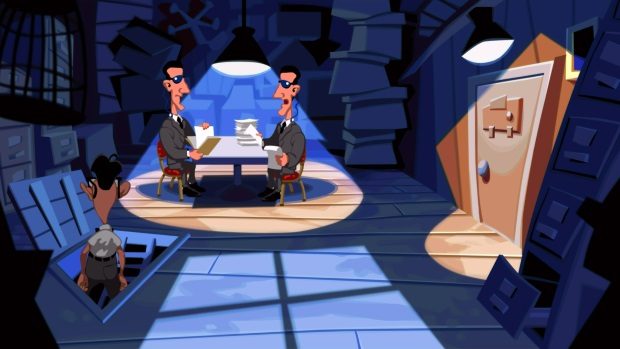 As for the story, Purple Tentacle is going crazy over world domination, so Dr. Fred created a time machine called “Chron-o-John” to send the crew a few days in the past to prevent this from happening. The time machine trip doesn’t goes as intended, and instead sends Hoagie 200 years into the past, and Laverne 200 years into the future. From that point, you’ll be able to control each team member independently in each time period.

Having the characters in different time periods would be pointless if the puzzles didn’t take advantage of that. Often, the only way to solve some of them was by teamwork across the time periods. One of the features I preferred is that the puzzles can be tackled in the order you want. For instance, you notice that a puzzle is too hard? Switch to another character and you can then progress with him/her, then come back later when you’re ready to address this problematic puzzle! 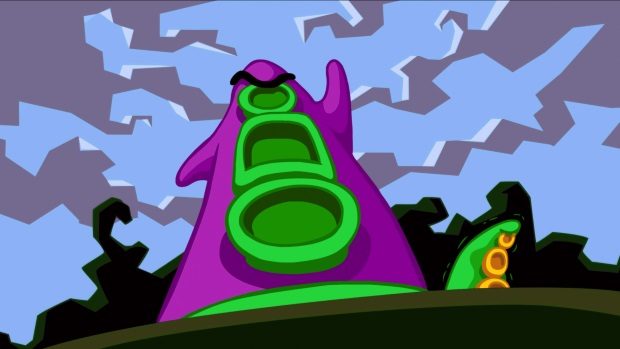 Final Thoughts
I liked playing through Day of the Tentacle. The voice acting was goofy and well executed, and the puzzles were great to figure out. I recommend this game to people who liked this game back then, or are looking for a good point and click game!

As an added bonus, it fully includes Maniac Mansion (the prequel to Day of the Tentacle), completely free, but its location is hidden so I actually missed it the first time I was passing by!


This review is based on a digital copy of Day of the Tentacle provided by Double Fine Productions.