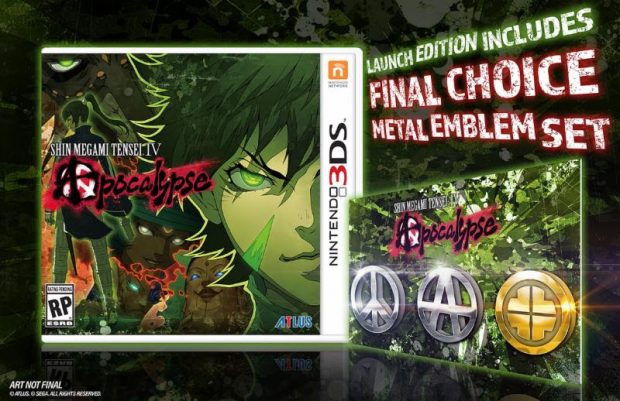 Atlus has announced the details for the Shin Megami Tensei IV: Apocalypse Launch Edition… and it’s something that definitely got our attention! If you pre-order a copy of Shin Megami Tensei IV: Apocalypse you’ll receive three pins made of metal (each one is .75″ in diameter) with a shiny finish! These metal pins represent Dagga’s mark as well as the Peace and Anarchy paths in the game, and they will be a very limited item!

Shin Megami Tensei IV: Apocalypse overlaps with the story of the original Shin Megami Tensei IV, while presenting a new story that expands on the universe of the previous release. The new game’s protagonist is a Hunter cadet who ends up being killed by one of the demons that is wreaking havoc in post-apocalyptic Tokyo. Luckily for him, Dagda – a mysterious god – resurrects him in exchange for his fealty. This sounds like a pretty good deal for someone who has just perished! The game will be available both digitally and physically, and it will retail for $49.99/CA$64.99.

The features of Shin Megami Tensei IV: Apocalypse are as follows:

* Divine Intrigue – Choose between peace or anarchy while being a pawn in the gods’ chess game.
* Combat Partners – Hunting demons is dangerous, so count on some backup! Alongside the standard three demons, players will be able to rely on one of seven partners to help win battles.
* Oodles of Demons – Be on your guard because Tokyo is infested with a series record 450+ demons to fight, fuse, or recruit.
* Revamped Demon Fusion – Demons will have affinities for certain skills, so players can better plan the outcome of fusions.
* Classic SMT Combat – Prospective Hunters will exploit weaknesses, boost attributes, and unlock skill bonuses with the returning Press Turn and Smirking systems.

You can learn more about the game at its official website, by clicking right here.