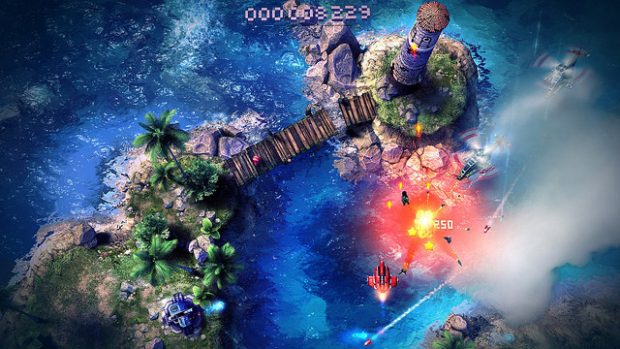 Infinite Dreams has announced they’ll be bringing Sky Force Anniversary to the PlayStation this summer, and they’re doing it in style! Why? Because Sky Force Anniversary will be available on PlayStation 3, PS Vita and PlayStation 4… as a cross-buy title! There’s been major improvements done to the the game, and it looks completely different from it’s original 2004 release, making this the definitive version of Sky Force.

Sky Force Anniversary includes a single player campaign where you’re tasked with defeating General Mantis in order to save the world. You’ll collect funds, defeat nasty enemies, rescue civilians and upgrade your ship with handy power-ups as you play through more than enough single player content to keep you busy for a while. Sky Force Anniversary also includes the option to play the game in local co-op, as well as several objectives you can aim for as you try to stay in one piece. On top of that, it will also include weekly tournaments that will take place on unique new levels, thus keeping the content fresh for a long time.

Sky Force Anniversary features an extensive single-player campaign where your main objective is to save the world from General Mantis â€” the nasty leader of evil forces. In order to defeat him you will have to blast through hordes of enemies, collect funds, rescue civilians, and constantly upgrade your ship with new, devastating power-ups.

Infinite Dreams still has no solid release date for the game to share with us at the moment, but they did mention that Sky Force Anniversary will be releasing this Summer, so if all goes according to plan we won’t have to wait for too long before we can try this updated shooter either at home or on the go for one single purchase!

Please be sure to check out the official reveal trailer below, and do let us know what you think about Sky Force Anniversary making its way to the PlayStation family!