[PS4 Review] The Walking Dead: Michonne What We Deserve

What We Deserve is the last episode of The Walking Dead: Michonne, the mini-series from Telltale Games that gave us three episodes following the Michonne character. Before diving into this one, you can read my review for Episode 1 right here, or my Episode 2 review.

This review will be kept as spoiler-free as possible so that everyone can enjoy it!

‘The Walking Dead: Michonne – A Telltale Miniseries’ stars the iconic, blade-wielding character from Robert Kirkman’s best-selling comic books, portrayed in-game by award-winning actress Samira Wiley (Orange is the New Black). Haunted by her past, and coping with unimaginable loss and regret, the story explores Michonne across a three-episode miniseries event. Players will dive into the mind of Michonne to discover what took her away from Rick, Carl, and the rest of her trusted group… and what brought her back.

This episode starts where the previous one left off, as the crew had to deal with a major decision made at the end of the episode. This decision will dramatically change the way this final episode unfolds, so there’s definitely a lot of replay value in this miniseries if you want to explore all the available options depending on the choices made on your way to the finale. I’m not saying anything about the actual plot twist so that you can play the game to see where the story goes!

This last episode features a good action-packed sequence and brings an answer to every question that had been left open in the two previous episodes. I mentioned in my review for the last episode that I felt that said episode seemed shorter, so I clocked my time playing this episode, and I realized that I had completed it in exactly one hour, which is a lot shorter when compared to other Telltale episode (those usually clock at around one and a half to two hours).

The finale di not disappoint, and it was fun to see it unfold. Michonne was a great character to follow, and I hope she’ll be featured in the upcoming The Walking Dead: Season 3! 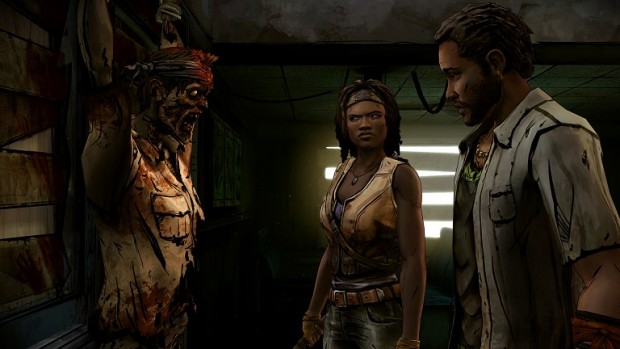 You can purchase the Walking Dead: Michonne series on the PSN right here.