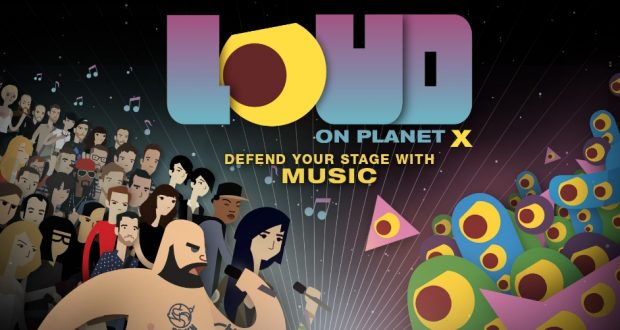 Ceidz had a lot of fun playing LOUD On Planet X for review at PS4blog.net, so I definitely wanted to check out this release to see what all the fuzz was about! Are you ready to dive into a musical journey that will bring you to a Zen state of gaming?

I actually covered LOUD on Planet X back when it was on Kickstarter, and ended up doing a Kickin’ it With to talk about the project, so I have been following its development for a while now. At its core, LOUD on Planet X could be described as mashup of a tower defense game like, say, Plants vs. Zombies, and a rhythm game, like Amplitude. The music is provided by a ton of bands and artists you probably know – Tegan and Sara, Purity Ring, METZ, Metric, Lights, and more. If this hasnâ€™t gotten your attention, then be sure to continue reading this review because this is definitely a game you want to add to your collection!

The game gets you going by having you select a band or artist to play as, and soon after that youâ€™re quickly given a tutorial of what to do in LOUD on Planet X. You must buttons to the beat (signaled by the border around the screen) in order to activate each of the four speakers at your disposal. Press the buttons out of beat, and your speakers wonâ€™t fire. A few seconds later youâ€™re taught about how to repair your speakers if they are damaged (hold the button for the damaged speaker until itâ€™s fixed). Youâ€™re also taught about how pressing the R2 button along with one of face buttons can activate a special effect that will aid you on your quest. The final piece of information is that you can press the L2 and R2 buttons at the same time when the word LOUD has been filled in order to unleash a sonic blast. 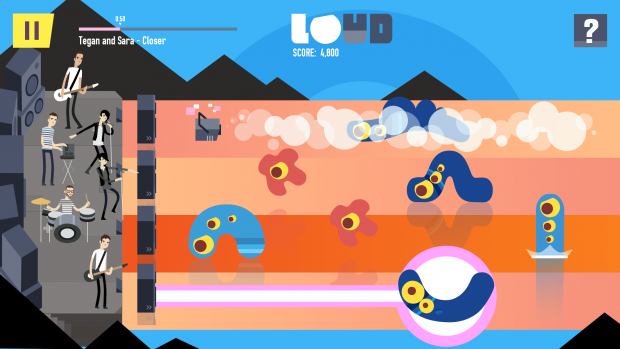 After youâ€™ve learned the basics of LOUD on Planet X, youâ€™re sucked in by a black hole that shows up out of nowhere, and thus begins your journey. Youâ€™ll now be able to select a song to play from one of the three colored tiers at your disposal, and after picking a song youâ€™ll be able to select a difficulty setting (Easy, Normal or Hard) to suit your expertise.

A couple of songs in youâ€™ll start the hang of things and see why this is a great game that is easy to learn but hard to master. You canâ€™t attack unless you keep up with the beat, and you canâ€™t keep up with the beat if youâ€™re not in the zone and feeling the music. Luckily the music selection for the game is superb and it perfectly complements the gameplay mechanics.

Triggering attacks exactly on the beat and keeping a streak going will reward you with a x2 multiplier on the points obtained from hits, so be sure to hit those notes perfectly if you want to get a 3 star rating on the song youâ€™re playing! Youâ€™ll know you have a streak going because the background and the lanes will change colors. Triggering special effects at the right time and on the right lane is also a must if you want to stay in one piece, because there are definitely trickier parts for each song where an onslaught of enemies will show up at once and the beat wonâ€™t allow you to button-mash your way out of that mess!

The enemies for LOUD on Planet X keep things interesting, because they come in all shapes and sizes, making you always be on high alert so that you can focus on the ones you need to defeat right away. The more eyes an enemy has, the more hits it will take before it can be defeated, and every time you hit an enemy it will lose one eye, which is very helpful since this simple visual cue makes it easier to switch attacking from one lane to the next as you graciously flow with the groove. On top of this, some enemies travel faster down a lane, while others have another special quality like, say, the large blobs that will explode when defeated, smearing their remains on the screen and thus covering part of your view of the battlefield.

As expected, there are a handful of trophies tied to getting a 3 star rating on all songs in a colored region (as well as one for defeating the boss with a 3 star rating), while the rest of the trophies are tied to completing all songs for each region, as well as for completing the songs of a subset of Polaris Prize Nomineess. Overall itâ€™s not a hard trophy list to 100%, but in the end it all comes down to how you are at rhythm games. 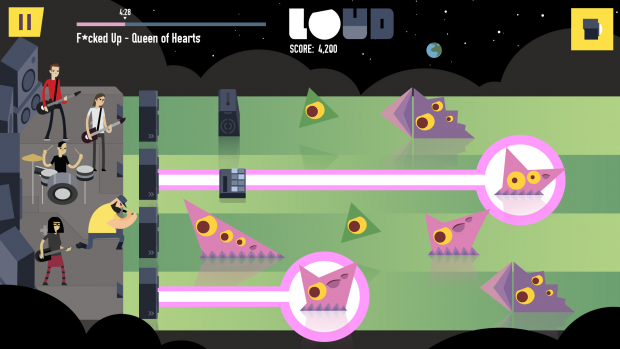 I really liked my time with LOUD on Planet X. The songs are great, the gameplay is simple yet entertaining, and the amount of content is just right for the asking price. I definitely look forward to the possibility of more songs being made available for the game as DLC because Iâ€™m more than ready to keep this going for a while!

[review pros=”Easy to learn gameplay mechanics.
Very fun game.
Great and varied song selection” cons=”If you have no rhythm, you’re going to hate this one” score=84]

Disclaimer
This review is based on a digital copy of LOUD on Planet X provided by Pop Sandbox.