Atelier Sophie: The Alchemist of the Mysterious BookGame ReviewsMedia
No Comments

[PS4/Vita] Atelier Sophie ~The Alchemist of the Mysterious Book~ Review

You have inherited your grandmother’s alchemy practice and cabin. Having some very basic knowledge of Alchemy, you must learn and grow. Can you solve the riddle of your book’s hidden memories? Read our Atelier Sophie ~The Alchemist of the Mysterious Book~ review to find out if you should add this RPG to your PlayStation 4 collection!

The Atelier seriesâ€™ latest installment follows the exploits of young novice Alchemist Sophie Neuenmuller, who discovers she is the owner of an enigmatic book imbued with a soul. This Mysterious Book seems to hold all the secrets to the art of Alchemy, even going on to become Sophieâ€™s mentor. As Sophie experiments with Alchemy throughout the story she unravels the bookâ€™s forgotten memories, and eventually sets out to uncover the strange tale of its origin.

Experience a pleasant journey alongside Sophie, her friends, and a diverse cast of townspeople that help with their adventuring needs. Uncover the multitude of mysteries of Alchemy that have been hidden away and forgotten alongside Plachta, the Mysterious Book. Experiment with the brand new Synthesis system to uncover Platchaâ€™s memories and learn new alchemy recipes at any pace!

Atelier Sophie ~The Alchemist of the Mysterious Book~ Launch Trailer

This is a double review for Atelier Sophie ~The Alchemist of the Mysterious Book~ by the_nmac and EdEN. the_nmac played on Vita, while EdEN played on PS4. This review represents what both had to say.

Atelier Sophie ~The Alchemist of the Mysterious Book~ is the 17th entry in the long-running Atelier series. I always love to play RPGs on my PlayStation Vita, so I was very excited to get started with this new release. I have reviewed one of the Atelier games before, but with 17 entries in the series, it can still feel overwhelming to jump into the game. I was relieved to find this as a smooth jumping on point in the series letting new players get in without any issues. Likely due to the games jump to the current gen and allowing new players to play with ease. 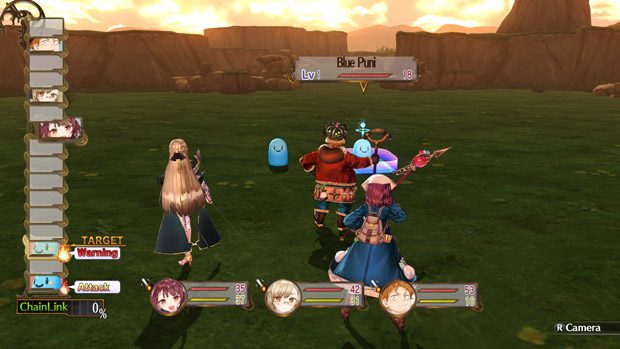 You star as Sophie, an orphan, who has just inherited her grandmother’s alchemy shop. You are a novice alchemist and must, therefore, learn so that you can properly take over the Alchemy practice. The majority of the focus of this game is on the relationships you develop with the people in town as you help them with their needs (by way of Request). There is no huge story per se (unlike most other JRPG=, but that’s fine as this tells a simpler and more intimate story that keeps you going until the end.

As an alchemist, your focus is on putting potions and other items together. To get this done, you journey out into the world and get supplies from it. You will often get the items you need by defeating monsters and enemies in the world. This is where the battle system comes into effect, my favorite part of any RPG. 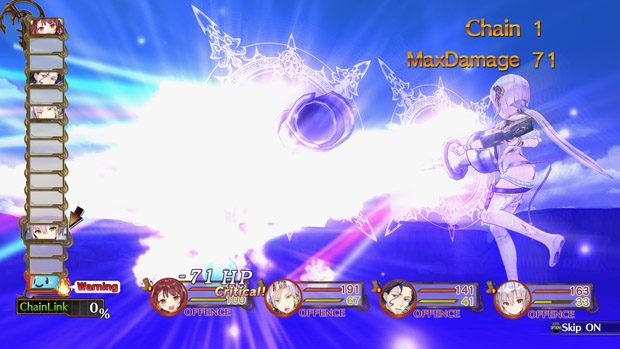 The battle system is fun as you place your party members in the front or back and select their actions – attack, defend, skill, item or run. One cool feature is the addition of stances where you can choose to go into a defensive or offensive stance during your turn. As you battle a meter fills up, depending which stance you have chosen you will be able to perform some cool support abilities or attacks when needed.

There are points when you will get warned before an enemy performs a big attack, and you can gamble and prepare for that with your stances, whether walloping the enemy offensively and hopefully killing it or focusing on a defensive approach to try and survive and carry on with the battle.

As mentioned earlier, I had a chance to play this on the Vita, and the game’s hand-drawn art really popped off my OLED screen. A robust color palette is used, really making all the small details pop in the game. This was really fun to look at throughout my journey!

Another Atelier game is here! I was thrilled to do an Atelier Sophie ~The Alchemist of the Mysterious Book~ review since this is the first entry in the series to see a release on the PlayStation 4, and the extra powerful from Sony’s current home console definitely helps the graphics “pop” as they showcase the great art style and designs from Yuugen and Noco. Speaking of that, this is the first time an Atelier game features two illustrators for the same release, making it have a unique feel when compared to the rest of the Atelier games.

Things have been reworked big time for this new game, and right at the center is the synthesis system the series is famous for, having been refined considerably, adding new elements here and there that make it seem very fresh. Recipes for items can be earned by talking to people around town or unlocked after events, and they are very important since they will help to unlock the memories of Plachta, the Mysterious Book from the game’s title that you find early in the game. Plachta will teach Sophie some basic alchemy skills so that she can complete new recipes to then write them down in her pages. 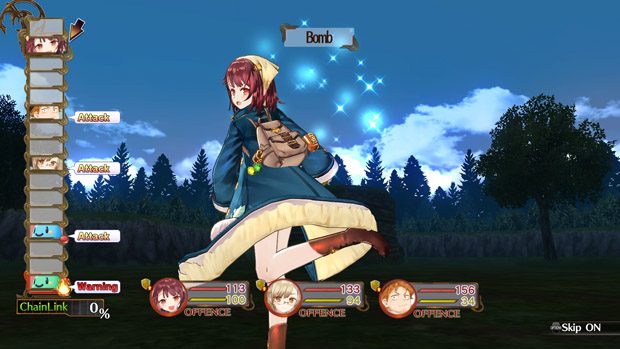 The Alchemy system asks players to select a cauldron to mix in the ingredients, select said ingredients to create an item (you’ll know if you can work on a recipe or not because the item’s name will have a Circle [can create], a Triangle [must create some ingredients first] or an X [cannot synthesize]), play a lite puzzle game where you arrange shapes in order to fill the available space to unlock bonuses, to then select the bonuses they want to keep for the item (some are more useful than others!). Every time you use synthesize an item, you’ll gain Alchemy experience, and as you level up you’ll be able to work on more recipes.

At the town’s cafÃ©, you’ll be able to take on Requests from the town folk (and quickly turn them in if you happen to already have the item they require), as well as purchase Rumors that will help you with your quest. Requests help to move the story along, while Rumors will provide hints on what to do or affect an area by, say, changing the type of ingredients you can gather -and yes, there’s trophies for completing Requests and getting Rumors!

Speaking of trophies, trophy hunters will be very happy to learn that there are only two missable trophies in the game! As long as you know what they require for you to unlock them, you’ll be able to enjoy playing the game at your own pace. Do be aware that there is one reported glitch for the game for a trophy that requires you to unlock all recipes, so click right here to check out a trophy guide so you don’t make the mistake of locking yourself out of the Platinum. 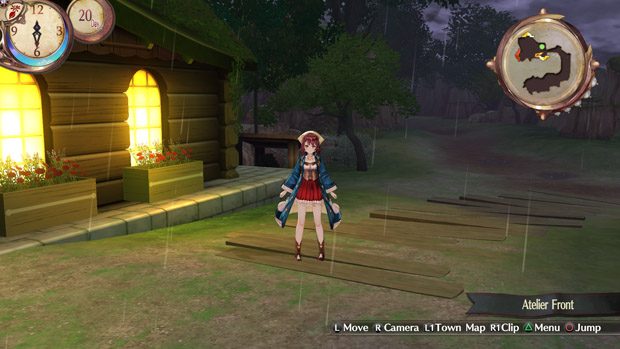 We found Sophie to be a great and relaxing, but challenging game. It ran great well on the Vita, maintaining solid visuals while at the same time providing a fun battle system and some challenging mechanics. On PlayStation 4 it runs like a charm and the visuals really pop on the large TV screen. Sure, it does not feature the deepest story of any RPG, but it is actually a nice break from the typical “save the world” story we are used to getting. If you are a fan of JRPG, then hopefully our Atelier Sophie ~The Alchemist of the Mysterious Book~ review has shown you why you should definitely give this one a try!

[review pros=”Excellent looking title.
Fun spin on the battle-system
Changes to the Item Synthesis from prior titles to speed things up.
Only two missable trophies.” cons=”Some grinding still required” score=93]


This review is based on PS4 and Vita copies of Atelier Sophie ~The Alchemist of the Mysterious Book~ provided by KOEI TECMO America.

Type:Rider Coming to Vita and PS4 This Month