Slain: Back from Hell was funded on Kickstarter around a year ago. After a rocky launch on Steam as just Slain, it is now back with a lot of improvements all over the place, thus giving us Slain: Back from Hell (a nod to how things were during its first launch). EripmaV already did a review for the game, but I felt that considering this is a “love it or hate it” type of release, a second opinion was in order. Check out our second Slain: Back from Hell review to see if this one is for you!

Slain: Back From Hell Review

As you can see from the video above, Slain: Back from Hell is a 2D hack and slash that some will liken to the old-school Castlevania games, which would be partially correct. But Slain has more in common with entries such as Castlevania III, Super Castlevania IV or Rondo of Blood since itâ€™s not a Metroidvania like Castlevania: Symphony of the Night and the other 2D games released after it.

Right from the opening scene youâ€™ll realize just how metal this game is: you are awakened by a spirit from your slumber in a mausoleum flanked by big skeleton statues carrying mighty axes â€“ seconds after that, the souls from hell start clawing through the floor in protest over your resurrection. And as soon as the first scene begins, the guitars start to riff, the blood starts to run, and the demons commence their attack. Oh, and when you defeat a boss, you can honor the Great Horned Metal God by headbanging. 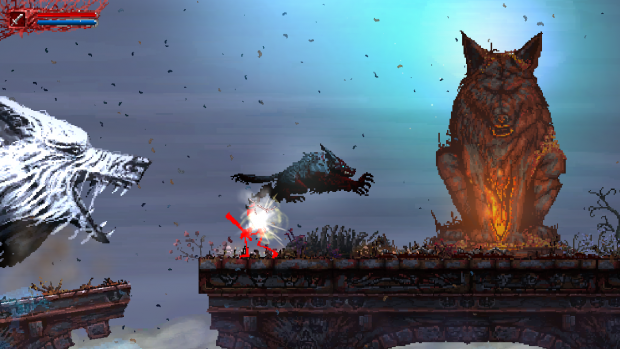 As for the gameâ€™s controls, they are very easy to understand. You can dodge with the L1 button, and activate your Mana Spirit with the R1 button. Mana Blast is activated by pressing down and the R1 button. Attack is set to the Square button, while the Triangle button serves as your block. You can jump with the X button, and change weapons with the right analog stick. Finally, you can set either the D-pad or the left analog stick to move your character around.

Before you get begin your adventure, I suggest you check out the Combat Tutorial since itâ€™s only three pages long. Pressing the Square button and L1 will allow you to dodge backward, which is a very handy skill to get you out of difficult situations. You should also know that if you keep the block (Triangle) button pressed for too long, enemies will inflict more and more damage with each hit, so you just canâ€™t keep blocking everything that comes your way. Mana Spirit can be charged if you hold down the R1 button, so be sure to keep this mind as you face the horde of demons in your way. You can also charge your attack by holding down the Square button to unleash a Brutal Attack that is deadly against your foes, but which leaves you open for their attacks if you donâ€™t time it right.

Blocking can also be greatly used to your advantage since you can time it just right to block at the exact moment an enemyâ€™s attack is about to hit you â€“ this will stun it, allowing you to inflict a Critical Strike with the Square button. Doing a Critical Strike to kill an enemy will release the Great Horned Metal God, restoring some of your mana in the process. The final piece of info to remember is that magic bolts and fireballs can also be blocked with the Triangle button or they can be deflected by being hit either on the ground or in mid-air, and this will deflect them back to their source. 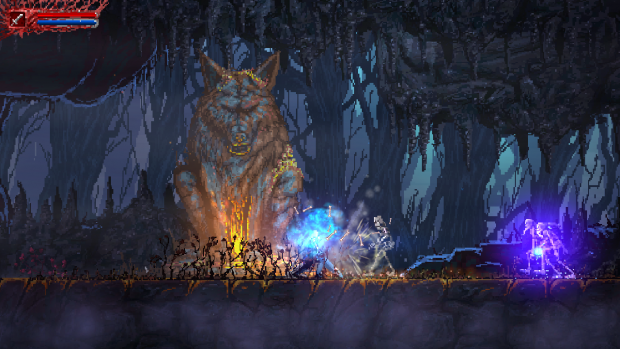 The checkpoints (marked by beacons) are plentiful, and reaching one will completely restore your health and mana while also marking your progress â€“ so that if you die, you can immediately continue from the last beacon you reached. Youâ€™ll also find Divine Angels during your quest, and they will return all of your health and mana as well.

This one pays homage to games of ages past, and this means it also includes classic and deadly hazards such as bottomless pits and spikes that instantly kill you. I grew up playing games that included these hazards, so I was more than ready to take on them in Slain. If you see a bunch of crows gathered on the ground, be careful!

In the options menu, there are a couple of options to activate two types of CRT filter that make the game look like itâ€™s an old game from the 1990â€™s which is a nice touch. Nothing says old-school like scan lines, right?

Trophies are plentiful in Slain: Back from Hell since it includes a full trophy count with a Platinum trophy. You get trophies for, say, avoiding the first trap in the game, dying for the first time, dying a lot of times, finishing sections without dying, defeating enemies without being damaged, using traps to kill enemies, and more. And if youâ€™re going to try and get that Platinum trophy, you need to get good, because two trophies, in particular, require that you donâ€™t use mana during the entire game, while the other asks that you complete the game without ever dying. 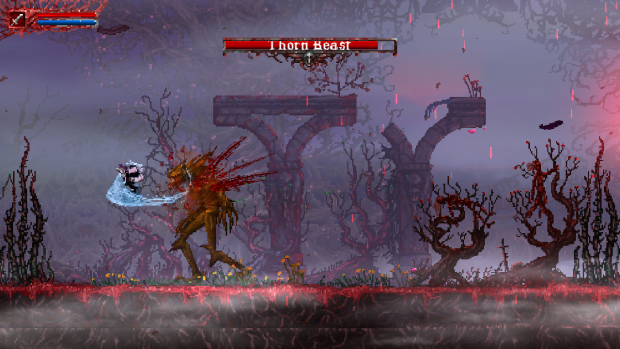 I had fun during my time with the game to write my Slain: Back from Hell review. Sure, the game can be unforgiving at times, but the feeling after you finally manage to complete a tricky section or defeat that one boss that was keeping you from advancing to a new stage is very rewarding. If you’re up for a challenge, then I can definitely recommend the game on PlayStation 4.

[review
pros=”Metal as f**k soundtrack and gameplay.
Old-school challenge.
Great looking game.” cons=”Challenge might be too much for some.” score=80]

Disclaimer
This Slain: Back From Hell review is based on a PS4 copy provided by Digerati Distribution.