Nights of Azure from GUST and KOEI TECMO is a new great looking game for the PlayStation 4. GUST is known for the stellar Atelier series (which we love!), and now they have worked on a new action RPG adventure that is exclusive to Sonyâ€™s home console. What type of game is this? Come read our Nights of Azure Review to find out!

Set on an uncharted island that floats in the North Sea, Nights of Azure paints a picture of a land where nights are tormented by azure-blooded demons. In this kingdom of Ruswal, very few people leave their homes after the sun has set, let alone have the strength and skill to take on these powerful monsters.
One of the best among these brave few is the protagonist, Arnice, a knight of great skill and power, who is assisted by her friend and priestess Lilysse in a quest to rid the land of demons. However, they soon find out that the solution to the islandâ€™s problems might not be as simple as defeating enemies in battle. 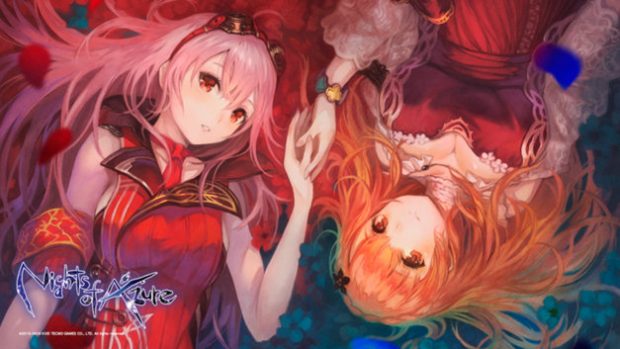 Arnice arrives at Rusewall Island, an isle where no one sleeps. She must investigate what is going on, and she is surprised to learn sheâ€™ll be joined by Lylysee, her close friend. After catching up, they head to their hotel to get some rest before taking care of business. Unfortunately, Arnice realizes there are fiends nearby that must be disposed of, and it is then that we learn about Servan, demons that can be summoned to aid in battle. The game quickly presents a tutorial to show the basics, mentioning that fiends appear at night and that all fiends must be defeated before being able to move onâ€¦ right before starting the first battle in Nights of Azure. 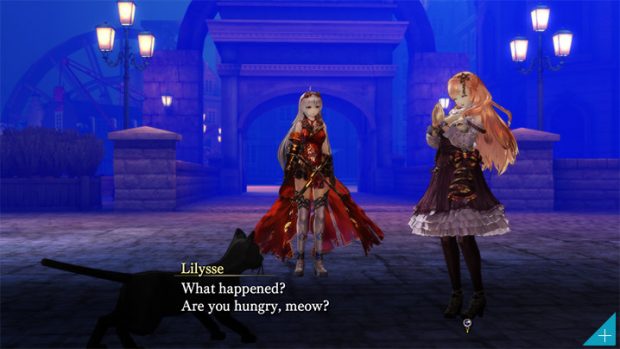 To summon a Servan, you must press the R1 button along with one of the face buttons (Circle, X, Square or Triangle), and this consumes Arniceâ€™s SP. Thereâ€™s several types of Servan, some focus on attacks, some focusing on healing, some shield and others can be called to buff the main character. When in trouble, you can activate a Servan Burst by pressing the R1 button and the same button that corresponds to the Servan youâ€™ve currently summoned. 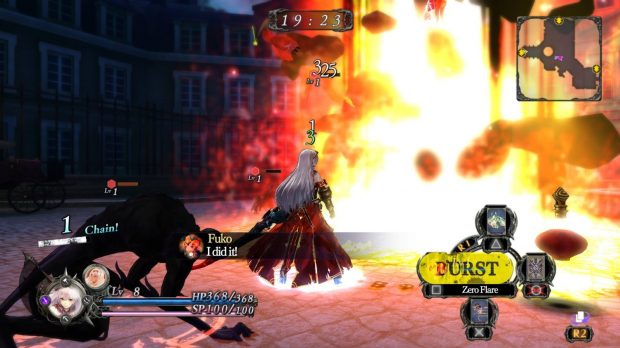 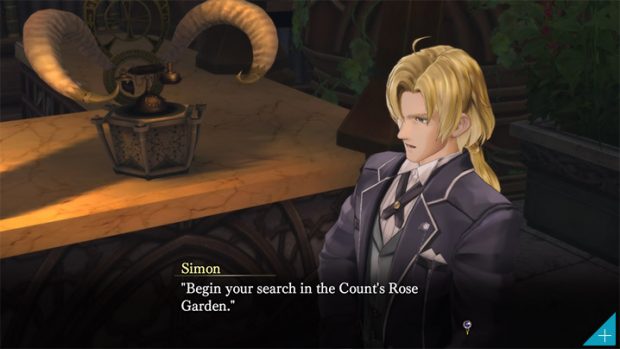 As you explore youâ€™ll run into treasure boxes, and theyâ€™re great for your adventure! So if you find one be sure to open it up â€“ it might heal your wounds and recover your SP, or give you a buff that will aid you greatly in battle. If you see a treasure chest, do not hesitate to hit it so that you can secure its contents. And speaking of helpful items, defeating enemies will also reward you with in-game currency or a potion that will recover your HP or SP, so always keep your eyes open so that you can grab them as needed. 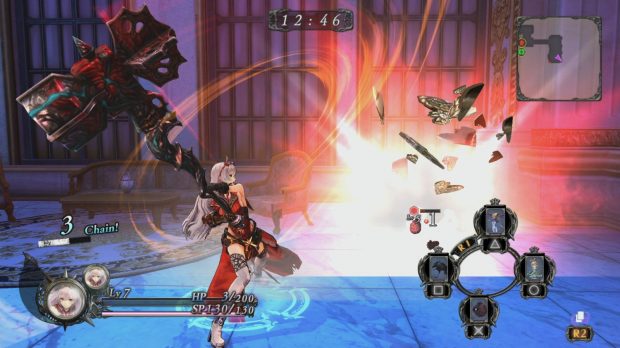 During your time with Nights of Azure, if at any point you feel overwhelmed or are greatly damaged, you can return to the hotel to heal and recover your SP, not to mention you need to visit the hotel lobby to save your game! On top of this, Simon, the hotelâ€™s manager, will allow you to purchase items with your hard-earned Libra (the currency in Nights of Azure). Items are very important because Arnice AND her Servans can equip them, so youâ€™ll need to balance your team to make the most of your time with the game. 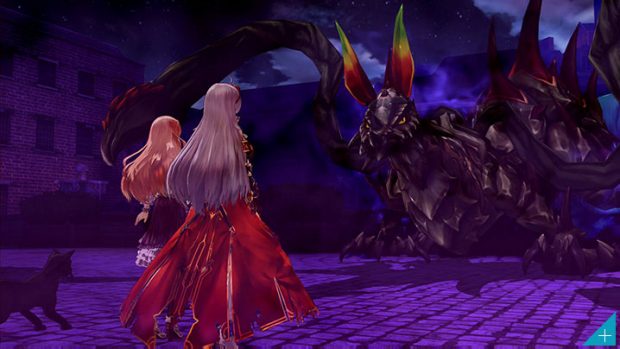 Nights of Azure features Japanese voice acting with no English dub, which is becoming more common nowadays than youâ€™d think. This being a huge game, I can understand how the cost of recording all dialogue in English would have been overwhelming, so itâ€™s a good thing that the Japanese voices are good and truly help the emotions come through thanks to a solid performance from the voice actors. 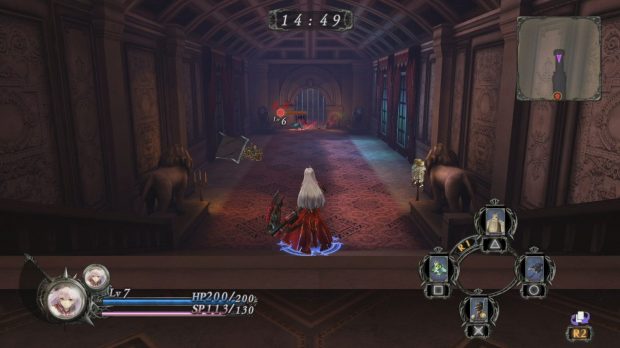 Trophy hunters will be happy to hear that, even though there are a handful of trophies that are on the grindy side of the spectrum, Nights of Azure does not have any missable trophies! Perseverance and a ton of time is all youâ€™ll need to eventually unlock a shiny Platinum for your collection, which is always great news! Overall, youâ€™ll probably hit the 50+ hour mark before you can add this Platinum to your collection. 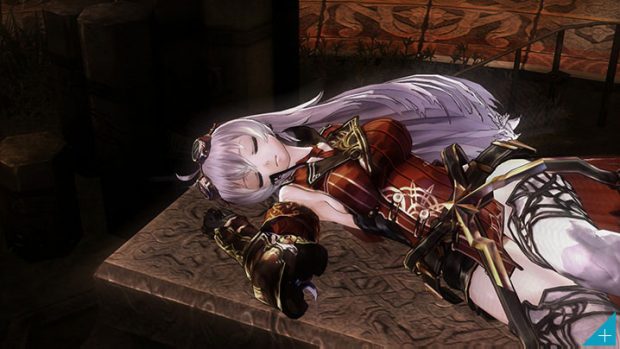 I had a lot of fun playing the game for my Nights of Azure review, and hopefully you give the game a go on PlayStation 4. GUST did a great job with this one, and I look forward to playing the studioâ€™s next release!

[review
pros=”Great story.
Plenty of content to enjoy.
No missable trophies.” cons=”Might feel a bit repetitive to some.” score=82] 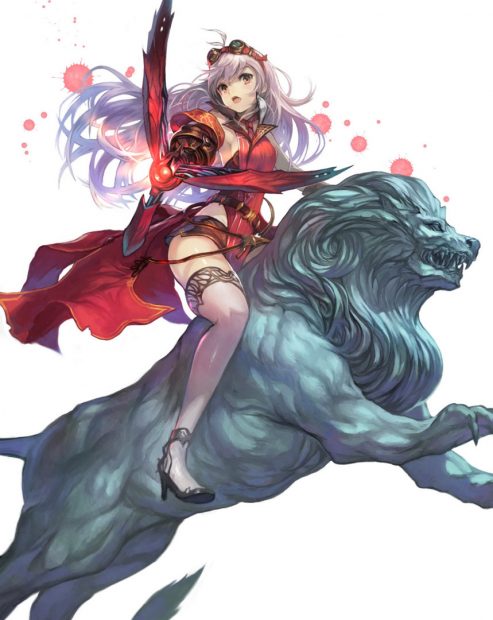 Disclaimer
This Nights of Azure review is based on a PS4 copy provided by NIS America.