Fate/Extella: The Umbral StarFeaturedMedia
No Comments

Fate/EXTELLA: The Umbral Star is a new “Musou” style game set in the universe of the Fate anime (which you can see over at Crunchyroll). It’s been developed by Marvelous and is published by XSEED Games. I didn’t know much about the Fate universe before playing this game and still enjoyed it, so watching the anime is a plus but certainly not a requirement to play this game. Read our Fate/EXTELLA: The Umbral Star to learn what I thought of this release!

Players will experience the story of Fate/EXTELLA: The Umbral Star from the independent perspectives of the three heroine Servants and face off against foes from a variety of Fate productions, including characters from Fate/EXTRA, Fate/stay night, Fate/Zero, Fate/Apocrypha and Fate/Grand Order, in fast-paced action. A new form change battle mechanic called Moon Crux debuts in this entry to match its series-first gameplay style, transforming the player-controlled Servants and granting them considerable powers that allow them to devastate enemies and take formidable challenges head-on. The game will contain the original Japanese voices with English text.

The first thing that impressed me while playing the game for this Fate/EXTELLA: The Umbral Star review is how high the production value was. I was expecting a semi-cheap game tie-in, but I was impressed by how great the different characters and zones looked. While this isn’t a story-driven game, I was also impressed by how many cut-scenes there were in between gameplay sequences, making this a story-rich release.

The story of this game is told from 3 different perspectives, so there is a lot of replay value. I began with Nero, which is a Saber class, and unfolded her story through the different levels. Before going to the gameplay section of my review, I wanted to mention that as you progress through the main events, side-stories become available involving secondary characters. You can jump to those side-stories at any time by going back to the main menu. I liked how it was possible to play side-stories while playing the main campaign, which gave me some better insight into the whole universe.

Speaking of the story, it is of course set in the Fate universe, and as someone who hadn’t watched the anime before playing the game, I was a little bit confused by the lore, but it didn’t refrain me from liking the gameplay and understanding the big picture of the game. It also made me watch the anime, so good job, game! 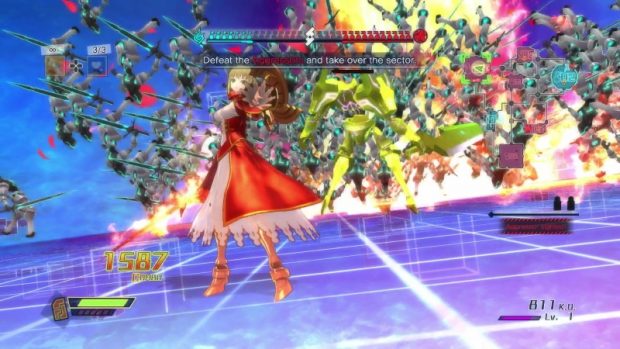 The gameplay of this game is comprised of different levels in which you must fight a lot of enemies Musou-style. For reference, it’s like in Hyrule Warriors, the action-oriented take on the beloved The Legend of Zelda series. Each level contains sectors which must be completed and recovered individually. Once enough sectors are on your side, you get enough “keys” to unlocks the boss of this section.

In each sector, the horde of enemies can be attacked by mashing on the action buttons, and more powerful skills are unlocked as you progress through the campaign. There are also Moon Crux/Drive skills which are like Limit Breaks and are very powerful – extremely useful for taking down enemies and bosses quickly!

– Destroy a lot of common enemies, which eventually leads to Aggressors showing up. Each sector of each level can spawn a few of those Aggressors, and once they’re defeated, the sector is back to you.

– Each Sector has some keys, and since you must reclaim keys as quick as possible, you’re encouraged to reclaim the sectors containing the highest key value first (their value is shown in the map of the level).

– The enemies in each level have the same goal as you and aim to claim sectors levels, and they’ll do the same thing on sectors you’ve already cleared until you’ve reclaimed enough keys.

– Once enough sector keys have been secured, the level boss shows up and once he’s been taken care of, the story will progress. 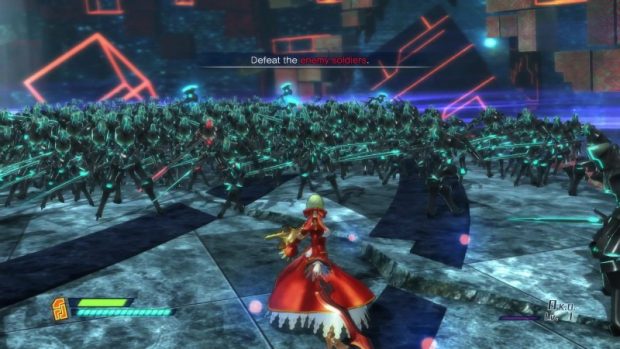 Final Thoughts
Fate/EXTELLA: The Umbral Star being a Musou game set in the Fate universe definitely makes it a niche game… but then again, it is available on the PS Vita, which is home to many great and fun niche games! I liked the scale of the game and how it manages to send hordes of enemies at us while keeping a solid frame rate. I also liked how we can raise the affinity of the many characters of the game during the talk segments or during the various side-quests that are available. If you’re a fan of the Fate anime, or fan of the Musou game genre, then this certainly is a game for you!

Disclaimer
This Fate/EXTELLA: The Umbral Star review review is based on a digital copy provided by XSEED Games.