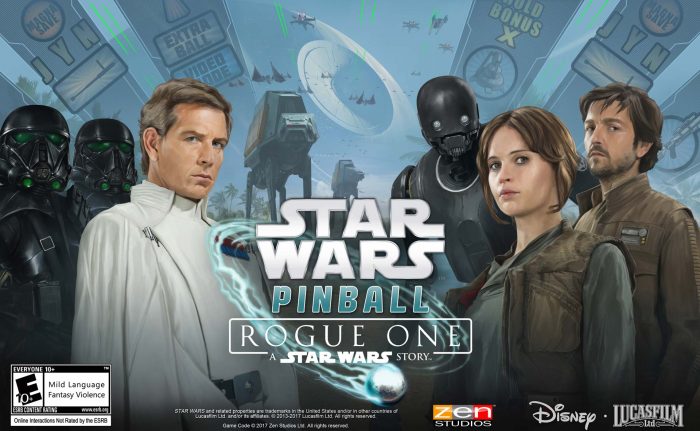 This is a double review for Zen Pinball 2 – Star Wars Pinball: Rogue One by EdEN and Tracey. This review presents what they both had to say.

The Empire has started testing a major weapon, and the Rebel Alliance wants to destroy it before it is too late. You are recruited by a band of rebels to infiltrate the Empire to steal the plans for the Death Star. This is key to restoring hope to the galaxy. 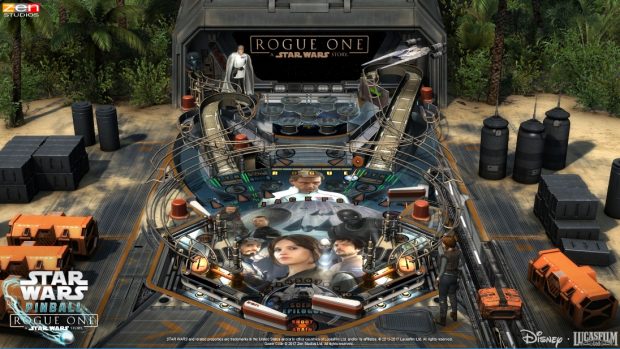 The features of Star Wars: Rogue One are quite extensive. There are ten story-related game modes to sink your teeth into, each with its own set of goals. In stealth missions, you must avoid stormtrooper detection. You have combat missions in which the action is fast-paced. You’ll even get to fly the U-Wing to shoot down TIE strikers! 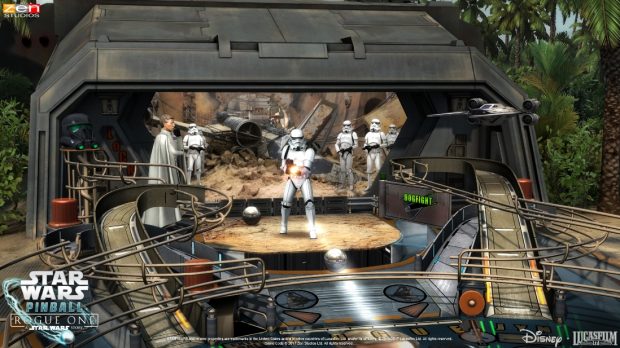 The table looks great and features the cast of Rogue On at the center of the table. You have Jyn Erso standing at the bottom of the table, and the evil menacing Director Krennic at the top of the table. Can you spot all characters from the movie on this pinball table?

Getting high score combos is much easier in this table , but like the previous tables getting decent high scores from mini-games can prove to be a challenge. The mini-games also require some effort and commitment on your part to get started. The best mini-game of the lot is probably the TIE shooting mini-game where the ultimate goal is to down the rebel fighters for high score bonuses. 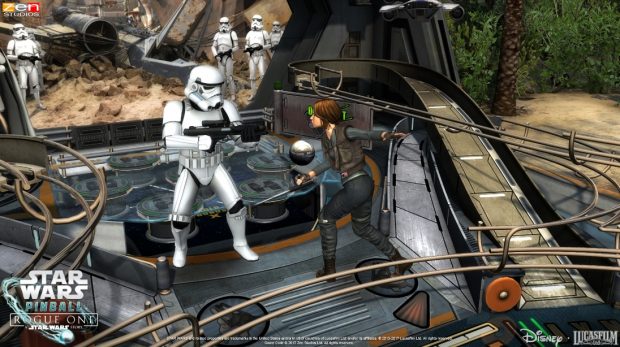 The sound effects mirror the realistic sounds from the actual Star Wars movies which are certainly an nice bonus that ties things with the Star Wars universe. For me Rogue one is a good table that is definitely on par with the one for the Force Awakens.

I’m a fan of the many pinball tables from Zen Studios, so I was certainly up for playing their release based on the Rogue One movie. As you can imagine, playing the pinball table will present you with some spoilers from the movie it is based on, so if you haven’t seen the movie, you might want to wait for a bit before diving into this very fun pinball release.

Everything looks great, as always, and the gameplay is fast-paced and without a single issue. As Tracey has said, there’s plenty to do in this pinball table, the highlight of which are the story related game modes you can gain access to when the word ROGUE is spelled out by hitting the corresponding targets in the field.

There are missions for evading the patrols keeping guard around the Holy City of Jedha, for completing short “fights” against enemies in what the game calls “closed range” combat, for escaping a tricky situation by hitting the cross ramps on the table to find an escape route, for sneaking into an enemy base, and more! 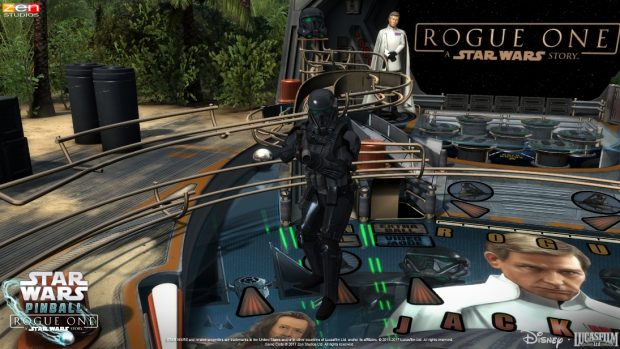 If you’re after securing a massive score, you need to make good use of the features on the table. Locking balls in the aptly named locking mechanism will open the way for you to unleash multiball once three balls have been locked. You should also target the Death Tropper so that you can collect the Jackpot – as well as the Super Jackpot from the second Death Trooper that will show up after beating the first one!

There’s also four ramps on the pinball table that are linked to the massive AT-ACT you can attack if you’re good enough. You’ll first need to hit all four ramps at least once to activate the mode. Once activated, you’ll have a short window of opportunity to hit the target behind the walker to collect your bonus.

There’s plenty of other content to experience in this pinball table, the biggest one being the action surrounding the Death Star… just like in the Rogue One movie! Are you good enough to secure the plans for the Rebellion to have a chance at surviving the war? 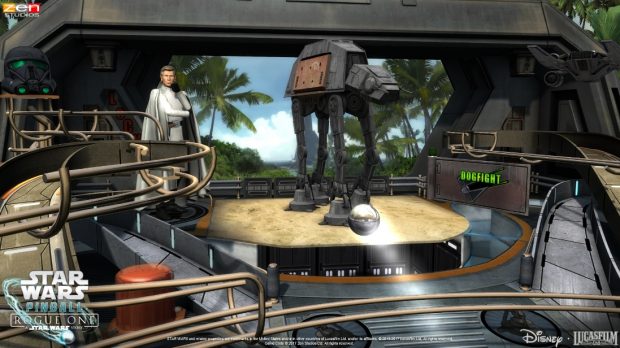 Overall, we both feel that Star Wars Pinball: Rogue One is one of the strongest pinball tables from Zen Studios, Star Wars or otherwise. There’s plenty to do on this pinball table, and its ties to the Rogue One movie will allow fans to greatly enjoy the fast-paced action as they try to take down all enemies on their path in their quest for the highest score of them all.

Disclaimer
This Zen Pinball 2 – Star Wars Pinball: Rogue One review is based on PlayStation copies provided by Zen Studios.

Very fun pinball table set in the Rogue One movie 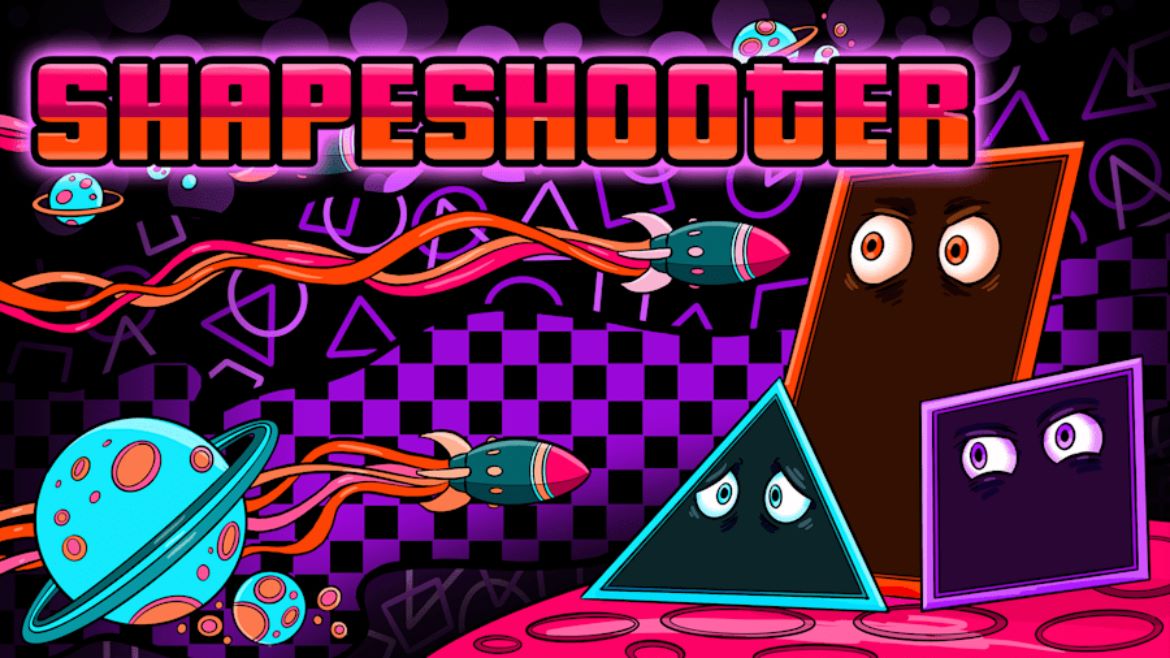 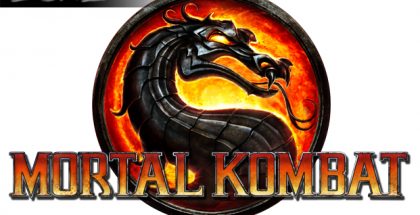