Studio Wildcard got in touch to announce that ARK: Survival Evolved will be getting its full release for PlayStation 4 on August 29 – yes, this is a slight delay.

Doug Kennedy, CEO and Co-Founder Studio Wildcard, had this to say:

The evolution of ARK has taken a 2-year journey through early access, and the full version will demonstrate that the extra time in development was put to good use. We spent the extra time squashing bugs, improving performance, enhancing the single player experience and delivering the end-game content that will reveal the full story of ARK. Weâ€™re excited to finally get it into the hands of survivors everywhere!

The game is available in three versions:

This base game includes everything a burgeoning Jurassic adventurer needs to get started in the world of ARK. It’s the core game, and all free content released up to this point, offering up hundreds of hours of gameplay to players.

The Explorer’s Edition takes the base game, and adds even MORE – introducing a Season Pass that will grant access to all expansion packs, starting with Scorched Earth (available now) and including more packs launching later this year and into 2018. 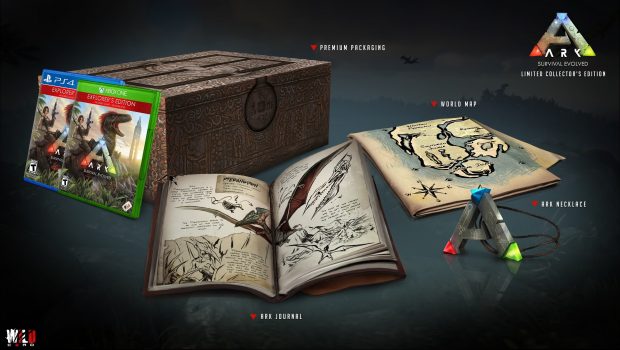 Only at GameStop and EB Games Canada will ARK fans be able to pre-order the â€œARK: Survival Evolved Limited Collectorâ€™s Editionâ€ for $159.99 USD/$219.99 CAN. The ultimate ARK fan’s dream, the limited Collector’s Edition is a collectible faux-wooden chest box that contains the ARK Explorerâ€™s Edition (base game + Season Pass) along with…

A handcrafted leather-bound Explorer’s Notebook, featuring the Dossiers of every in-game creature

A cloth map of the ARK island

A poster of the Studio Wildcard development team

That’s a lot of ARK! Which version of the game are you getting? Let us know in the comments below!