Rice Digital has announced its exclusive version for CHAOS;CHILD: the Gigalomaniac Edition! This visual novel is making its way to North America and Europe this year, for both PS4 and Vita. 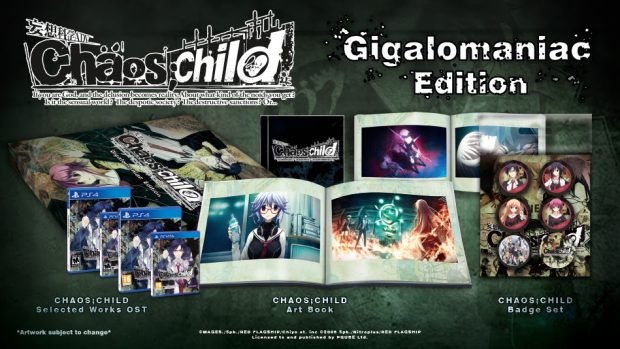 As you can see in the image above, the Rice Digital edition of the game will include:

You can pre-order the European version right here. And if you want the US version, that one can be found at this link.

In CHAOS;CHILD, a series of bizarre murder cases occur place in Shibuya, Tokyo. A young man named Takuru Miyashiro notices that the dates of the crimes match up with a series of murders that happened shortly before the fateful earthquake that killed his parents and changed his life six years earlier. Using this information, he deduces the date of the next murder and begins to investigate.

Determined to get to the bottom of the â€˜New Generation Murders’, Takuru, along with his classmates from the Newspaper club, becomes involved in a mysterious series of events that will put them all in mortal danger and irrevocably change Takuru’s life once againâ€¦

Chronicles of Teddy: Harmony of Exidus To Be Released By Aksys Games This Fall... July 24, 2015 | EdEN