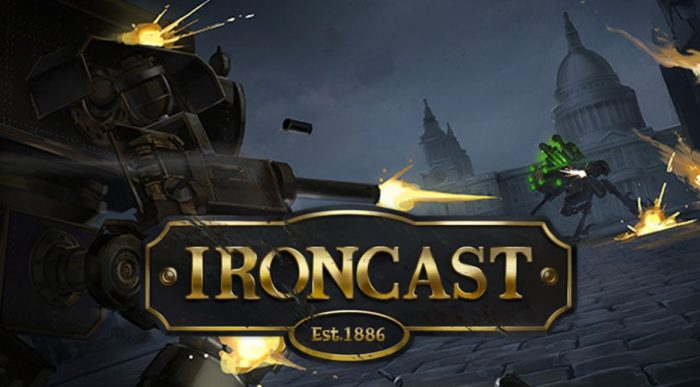 Ironcast from Dreadbit and Ripstone is a highly addictive match three turn-based RPG you should check out. Learn more in our Ironcast review!

The year is 1886, and the game is ser during a time in which France and the British Empire have been at war for a decade. And the reason for this war? It turns out that France developed a powerful clean-energy known as Voltite, but it didn’t share this discovery with the British. This leads the British to steal some Voltitr sample, which is why France declared war in 1875. In 1882, a new type of ground unit was developed, a powerful vehicle that could walk into battle with multiple weapons while moving faster than Steamtanks. These marvelous machines were called Ironcast. They were built by a group of wealthy business people known as the Consortium of Merit who did not like this long-running war to still be taking place.

The game’s controls are different from what you’d expect from a puzzle game or an RPG. You move the cursor around the grid with the left analog stick, and can hold down the A button to march nodes as you go – releasing the A button will make it so that the node match action is completed. The L button fires Weapon A, and the ZL button fires weapon B. The R button is for activating drives, while the ZR button is for activating Shields. The D-Pad is used for activating your Ironcast abilities. If you need to refresh the node grid since you can’t find any useful node combos, you can do so with the – button. Just be careful because doing so will make you forfeit the rest of your turn. 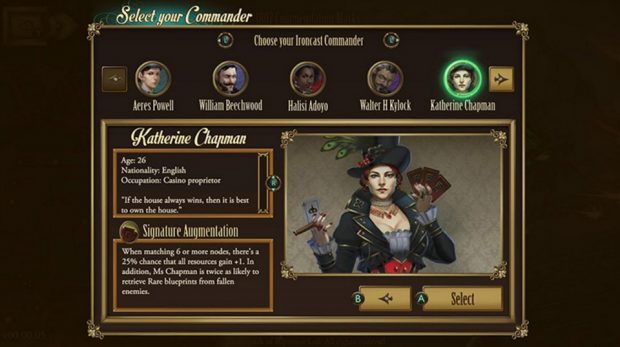 Before diving into your adventure, you’ll first need to select your Commander. At first, this is not a problem since you’ll only be able to select one of the seven Commanders – the rest must be unlocked by exchanging commendations (more on those in a bit). Aeres Powell is the 27-year-old CTO of Powell Energy Co. Each Commander has a Signature Augmentation that is activated when matching six or mode nodes in one move, an Aeres’ reduces the energy cost of activating your next Shield or Drives by 1 (and no, you can’t go lower than 1 cost) – oh, and all of her weapons get a 10% boost as well.

And once you have selected a Commander, you will be able to select an Ironcast to pilot! The same thing happens with this lost since only one Ironcast is available: The Duranraven. It’s default systems loadout is balanced and offers you a good start for your journey. Ironcast have signature abilities, and The Dunraven’s consists of six small missiles that will individually target a random enemy system and deal 10% of the system’s health as damage. There’s another six Ironcast for you to unlock, so you better start to earn several commendations for your efforts! Each Ironcast also has different resource and health capacities, so be sure to check that out when selecting which one you’ll take into battle. 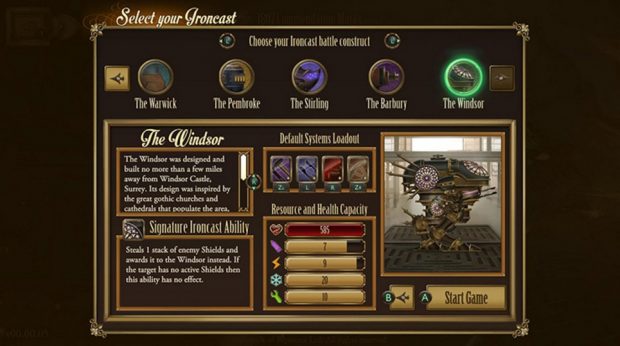 Speaking that, battles are turn-based, so you and your enemies will get a chance to match nodes to add their energy (based on its color/symbol) to the corresponding arsenal so that an action can be taken before the turn is over. You can also select not to take an action by pressing the B button if you want to save your energy for later. Stay alive and deplete your enemy’s HP and you’ be victorious, gaining war assets, scrap, and XP for your effort as mission rewards and bonuses from matches made. As you level up, you’ll gain boosts to your stats as well as Passive Augmentations or Ironcast Abilities to add to your arsenal.

Once you’ve complete a battle you’ll need to repair your Ironcast by spending scrap since your HP carries over from battle to battle. You’ll also get to visit the workshop to turn looted blueprints into system upgrades by spending scrap. Repairing your Ironcast is a must because it increases your odds of surviving. This is very important because Ironcast has a bit of a roguelike vibe. When you die, and you will, you’ll be taken back to the main menu so that you can start a new game. 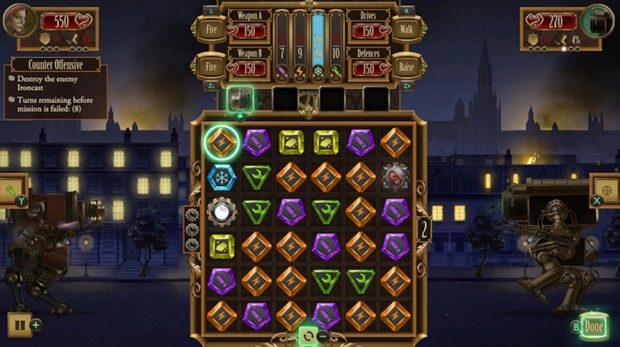 But before doing this, you should use your hard-earned commendations to unlock permanent upgrades that will certainly make it easier to stay alive next time. These permanent upgrades include new Commanders, new Ironcast, new augmentations as well as Ironcast buffs. Commendations are awarded for your performance, but sometimes they will also pop-up on the playing field so that you can match them and collect them right away. You could, for example, increase the HP you gain from leveling up, boost the scrap you earn during a campaign run, or find something else to help you become more powerful.

And once you’re indeed stronger you might want to take on a boss battle! Bosses are very harsh enemies that won’t stop until you’re destroyed, so make sure you’re as prepared as possible. On the mission map, you’ll notice that the boss will continue to move towards its target after every mission you take, until it is time to face them. You’ll need to make the most of the permanent upgrades you can unlock with your medals, as well as the leveling up you do from the experience gained after every level. 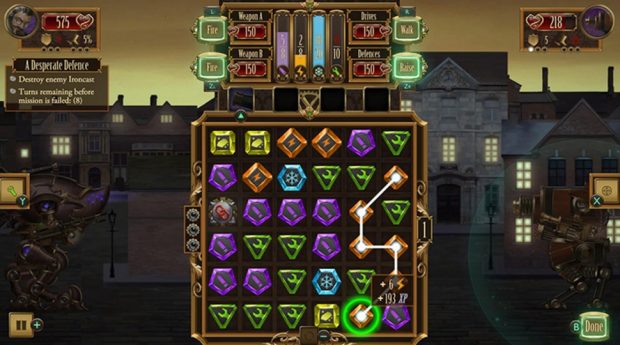 Ironcast is a must-have on the Nintendo Switch. Its gameplay is highly addictive, and it can have you playing for hours at a time before you realized how much time you’ve spent with the game. It’s an excellent pick up and play release on Nintendo Switch thanks to the nature of this hybrid console, and one you should definitely check out today.

Disclaimer
This Ironcast review is based on a Nintendo Switch copy provided by Ripstone.

Art of Fighting Anthology Now Out On PlayStation 4

Life Is Strange: Before The Storm Open Letter Video