Digerati and Bootdisk Revolution released Bleed on PS4, an action-packed game with lots of action and platforming. Read our Bleed review to learn more!

Bleed is a game about a girl named Wryn who wants to the biggest hero in the worldâ€¦ and she is perfectly equipped to achieve it with her big arsenal of weapons! You are going to help her on her quest and make her biggest dream come true. This one is a sidescrolling action/platformer that is a lot of fun once you get used to the controls. Since this is a twin-stick shooter, you will move with the left analog stick and shoot with the right one while you jump, double jump and triple jump with the right shoulder button. Itâ€™s a setup that not everyone will be used to, but once things click it works for the game.

As I mentioned before, Wryn has quite an arsenal of weapons, but obviously, at the start, she will only have a pair of pistols by her side. Oh, and a rocket launcher you can swap on the fly! Sheâ€™ll soon have access to a nice variety of weapons, such as homing missiles, a shotgun and more. Youâ€™ll definitely have a blast â€“ pun intended â€“ with the game!

This one is a bit on the short side since it has a few levels that arenâ€™t particularly long, but if you want to 100% the game, youâ€™ll to replay the levels several times. Youâ€™ll be running as you shoot from the rooftop of buildings, travel on a moving train, and youâ€™ll even get to be inside of a dragon! Each level has a mid-boss to defeat, and then youâ€™ll battle some more minions before running into the boss. Youâ€™ll get to select a difficulty level for your run, and I advise that you start on a lower difficulty before jumping into the hardest ones or else youâ€™ll end up dying a lot.

Beating levels awards you with points that you can use to purchase upgrades for your weapons, as well as abilities and even boosts to your health bar. Due to this being a short game, the upgrades system is not as robust as youâ€™d expect, but itâ€™s good enough to keep you going in the lower difficulties as you prepare for doing runs in the hardest difficulty setting. 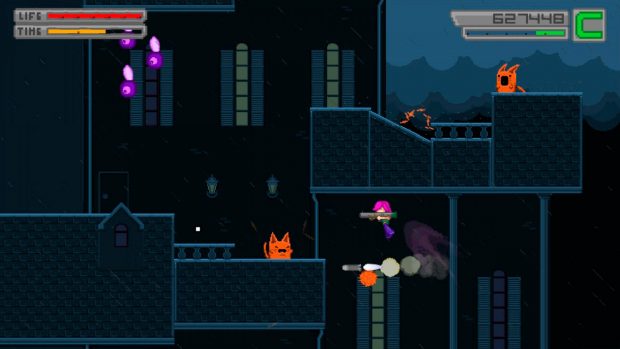 And if you want an even bigger challenge, then Arcade mode is for you- This is no ordinary arcade mode since youâ€™ll need to complete the game from start to finish in one sitting and without dying. Thatâ€™s right, you canâ€™t die a single time during your run! This will require a lot of practice as danger lurks around every corner, so good luck! And speaking of Arcade Mode, thereâ€™s a trophy in the game for completing it on the hardest difficulty, so thatâ€™s probably going to be the hardest trophy on your path toward the gameâ€™s Platinum. Thatâ€™s right, the game might be short but it offers a lot of replay value, and it backs that up with a full trophy list with lots of things to do. 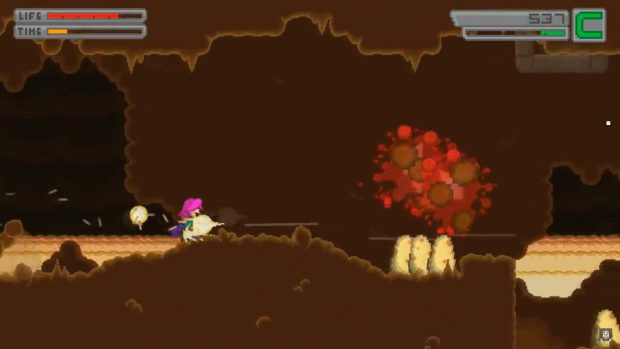 Bleed is a fun game with nice pixel graphics and a very addictive nature. Once you get the hang of the gameâ€™s controls, youâ€™ll be ready to start bumping up the difficulty to get some more trophies for your collection. The one complaint I have for the game is its music since it didnâ€™t really do it for me, but other than that I can definitely recommend Bleed on PlayStation 4.

Disclaimer
This Bleed review is based on a PS4 copy provided by Digerati.