Citizens of EarthFeaturedMedia
No Comments

Help protect the earth as the newly elected Vice-President of Earth, by doing what Vice-Presidents of Earth do… find and recruit your citizens and send them into battle! Check our review revisited of Citizens of Earth!

Citizens of Earth: Meet the Vice President of the World! | PS4, PS Vita

Citizens of Earth was a fun throwback to the days of yesteryear. The game harkens back to the old SNES title Earthbound, a game that has a sequel we still haven’t gotten in North America. The game starts on your first day as the Vice President of Earth. Unfortunately, everything goes wrong, so you’ll need to recruit citizens of this earth to create a party and lead them into battle. It’s a lengthy RPG that is quirky and humorous, something we don’t often get to play. 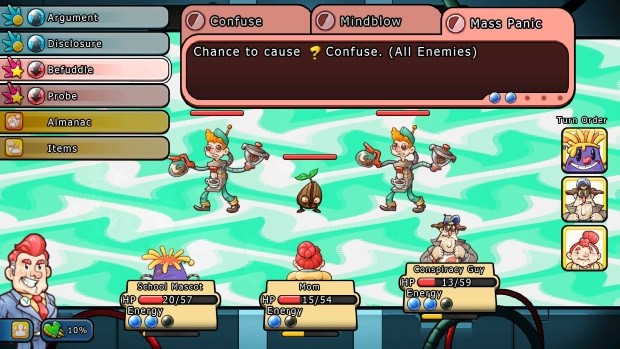 Here were some of Ceidz’s thoughts back then:

If youâ€™re a fan of Earthbound (either after playing it back in the day on the SNES or on the Wii U Virtual Console), youâ€™ll be in familiar territory. Citizens of Earth is a great RPG release from Atlus that features an extensive cast, a great battle system and funny dialogues! On the other hand, since this game doesnâ€™t use random encounters, Iâ€™d have preferred to be able to navigate in the dungeons without being chased by all the enemies. Also, the few bugs that I encountered in the Vita version are something to consider. Hopefully, the bugs will be corrected with a couple of patches here and there.

[PlayStation 4] Planet of the Eyes Review